Among the many technologies to come under the purview of the Khronos consortium have been augmented reality and virtual reality. Looking to fulfill the group’s mandate to develop open standards for new technologies, the group set about creating an open API for use with AR and VR devices, which culminated in the OpenXR standard. The initial version of that standard was released last summer, and now that the wider technology industry has finally had a chance to develop software for it, this morning Khronos is offering a status update on the state of OpenXR, along with a few choice announcements relating to projects using the new API.

First and foremost, Khronos is announcing that the first standard-conformant implementations for OpenXR are finally shipping. Starting today, both Oculus’s and Microsoft’s respective OpenXR runtimes have passed conformance testing and have been approved by the group, allowing the two companies to promote their support for OpenXR as part of Khronos’s OpenXR adopters program. 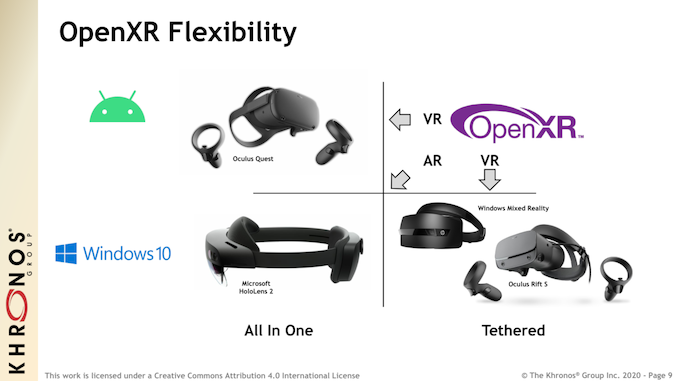 Surprisingly, both tethered and stand-alone headsets are among the newly-compliant devices. Both Microsoft and Oculus now have approved runtimes for Windows, bringing OpenXR support to Windows Mixed Reality devices along with the Oculus Rift family of HMDs. Meanwhile Oculus’s stand-alone, Android-powered headset, the Oculus Quest, has also received OpenXR support, as has Microsoft’s stand-alone HoloLens 2 AR headset. This means that in the span of a year OpenXR support has already expanded to cover the full gamut of devices OpenXR was envisioned for, with both AR and VR devices now supporting the API.

This in turn marks a major milestone for OpenXR, as it means the standard has finally resolved the bootstrapping problem that all new APIs face. With working hardware available, rank and file software developers can finally write software and test against actual devices, making the entire process much easier. Consequently, in many ways it’s this moment, rather than last year’s OpenXR 1.0 launch, that truly kicks off the lifecycle for the API, as Khronos and its members can finally reach out to developers about widespread deployment. Meanwhile, the ranks of supported headsets is slated to grow over the coming months, as Valve, Varjo, and Collabora all have OpenXR implementations currently under development.

Speaking of Valve, the game developer and increasingly ecosystem builder as well has previously announced that it is working to transition its own VR wares to OpenXR. Last month the company launched beta support for OpenXR within SteamVR, allowing SteamVR games to use compliant OpenXR runtimes. Meanwhile Valve is essentially putting development of its own OpenVR standard on hold, shifting its focus to OpenXR as any new SteamVR features are slated to be developed against Khronos’s API. 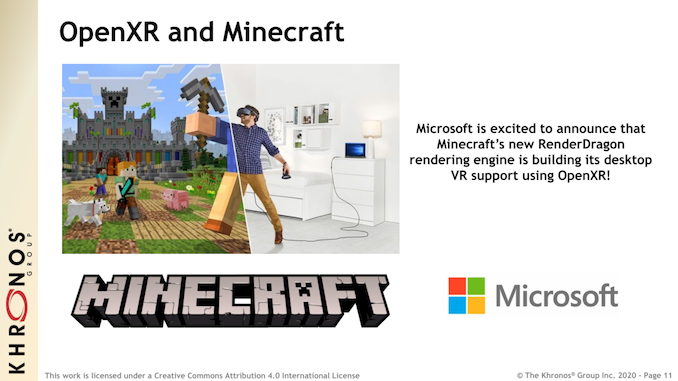 Meanwhile Microsoft is slated to be using OpenXR for some of its own projects as well, most notably a new VR version of Minecraft. Being announced today, Microsoft is adding VR support to the new RenderDragon engine, which was launched earlier this year as part of Minecraft’s ray tracing-enabled graphical overhaul. The new VR implementation will replace the older implementation, which was built against the game’s previous rendering engine and only supported Oculus and Windows MR devices. 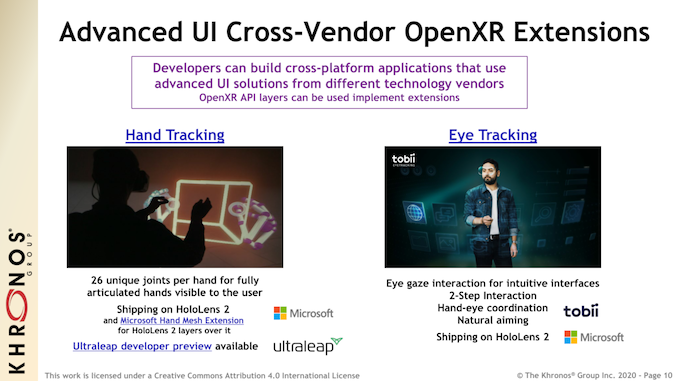 Finally, Khronos is also offering a brief update on the state of hand and eye tracking within OpenXR. Neither of these features made it into the core 1.0 specification, but both are now being developed as cross-vendor extensions. Both of these features are up and running on the HoloLens 2, and while developers can already use them today, anyone planning on sticking to the core specification will be happy to hear that Khronos is planning to adopt these extensions into a future version of the core specification once the extensions have proven their worth. 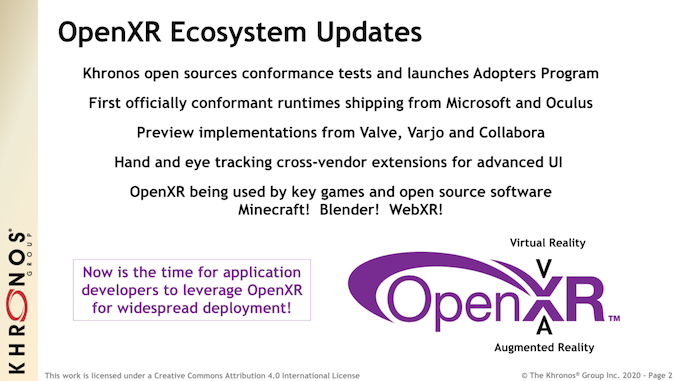