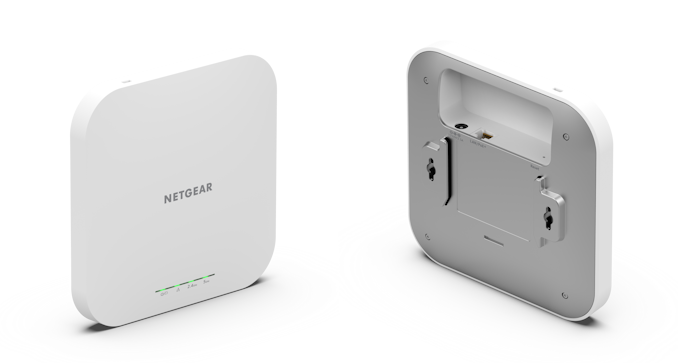 Wi-Fi 6 deployment in the consumer market has achieved critical mass, with almost all modern smartphones and notebooks equipped with support for 802.11ax technology. As expected, we are starting to see the small-business and enterprise access points (APs) moving to support this technology. While vendors such as Aruba Networks, Ruckus Wireless, and others already have Wi-Fi 6 SMB / SME-focused Wi-Fi 6 APs in the market, Netgear is launching their first set of Wi-Fi 6 products targeting this segment today - the AX1800 WAX610, and its outdoor counterpart, the WAX610Y.

Unlike previous Wi-Fi technology upgrades, the move to Wi-Fi 6 brings in the need for some underlying infrastructure changes - support for NBASE-T and PoE+ (802.3at). Some high-performance Wi-Fi 6 APs even require PoE++ (802.3bt) support. Netgear's WAX610 and WAX610Y can be powered using 802.3at and use a 2.5Gbps RJ-45 port for wired backhaul / power delivery.

The focus in SMB products is more on stability compared to peak performance. Consumers in this space also want the ability to support a large number of concurrent client devices - high-density deployments - much more than what is usually handled by consumer Wi-Fi routers. Some SMBs also have to make do with non-dedicated IT staff, and external management capabilities as well as ease of setup / installation also plays a role in some scenarios. Netgear claims that the WAX610/WAX610Y's feature set aims at tackling these aspects. The AX1800 (2x2 802.11ax with 1200 Mbps in the 5 GHz band and 600 Mbps in the 2.4 GHz band) APs utilize a Qualcomm chipset. Based on the performance specifications, we do not have 160 MHz support, and Negear also mentioned the absence of uplink OFDMA support. The former is not really important for SMB APs - at least, not without Wi-Fi 6E which brings extended spectrum and the possibility of availing multiple contiguous 160MHz chunks without interference / DFS.

In terms of security, Netgear is offering WPA3 support (as mandated by the IEEE Wi-Fi 6 specifications), as well as support for up to 8 SSIDs with a separate VLAN for each SSID. A number of SMB Wi-Fi 6 APs currently in the market use a 1Gbps wired port, but, Netgear has equipped their two new models with a 2.5Gbps LAN port. While most deployments would use the wired port for backhaul, Netgear has also provided mesh support, enabling the WAX models to mesh over Wi-Fi with other Netgear APs such as the WAC610 / WAC610Y / WAC540 / WAC564. The maximum power consumption for the WAX610 over PoE is rated at 15.3W, while the WAX610Y consumers 16.1W - enabling 802.3at-capable switches to power them easily. The APs will also function with 802.3af (traditional PoE), but ends up getting limited to 60% of its peak performance capabilities.

The APs are part of Netgear's Insight-capable portfolio - allowing optional cloud-based management access. This is a boon for part-time IT folks as well as resellers wanting to provide value-added services. 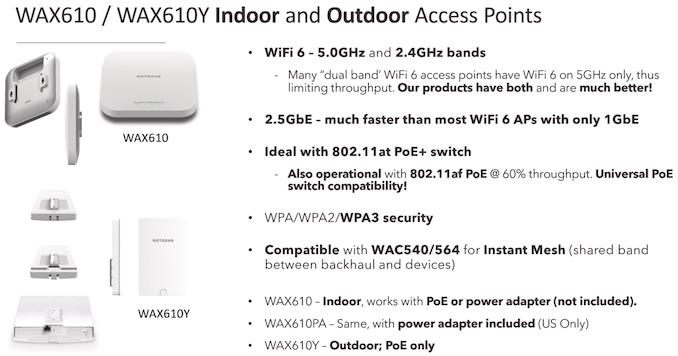 I have quite not been sold on the Insight-type cloud-based management scheme for SMB equipment (irrespective of the vendor offering it). However, the value offered to folks who are not dedicated solely to IT maintenance in an organization is undeniable. Now, the increasing prominence of work-from-home culture will bring additional pain-points to solve, and Insight-type cloud-based management can definitely play a role. For example, enabling seamless VPN and/or the ability to securely extend a WLAN from an office location to an employee's home (for scenarios where mobile devices needs to be in the company network for certain applications) are some challenges that IT administrators might want to solve in a user-friendly way moving forward. Cloud-based management solutions can definitely be of help in those scenarios.

The WAX610 and WAX610Y are Insight-capable (not Insight-only), and expose more functionality for local management compared to what is available over the app / using the cloud. Pricing ranges from $180 (base indoor model without a power adapter) to $250 (outdoor model). Compared to SMB offerings from vendors such as Engenius and ZyXEL (Engenius EWS357AP @ $184 and the ZyXEL NWA110AX @ $200, both AX1800 PoE+ APs without 2.5Gbps LAN), these are very competitive price points in terms of the features offered.