02:04PM EDT - Final talk of this session is IBM z15. This is big iron mainframe stuff. Prepare to be shocked about these chips, and wonder why you don't have them. 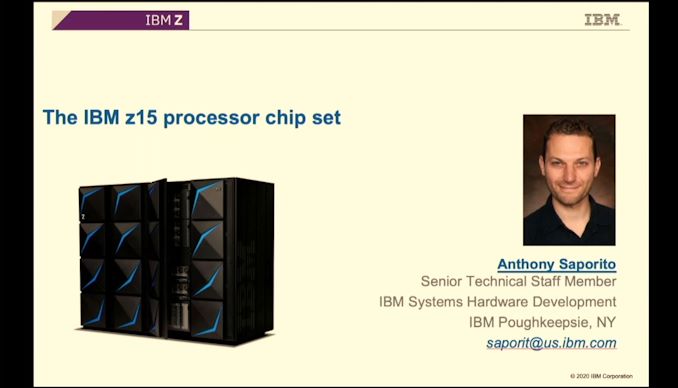 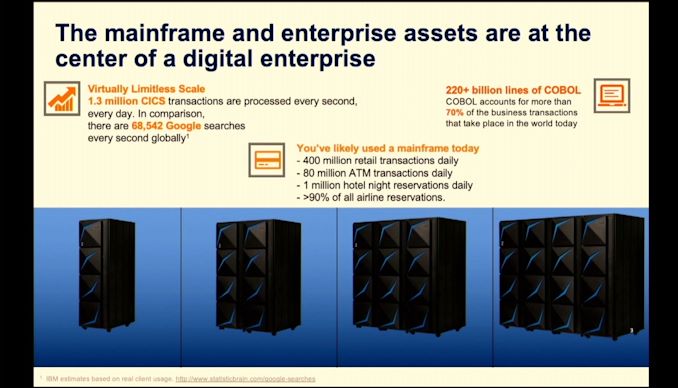 02:05PM EDT - 70k searches on google per second, vs. 1.3 million transactions per second on mainframes 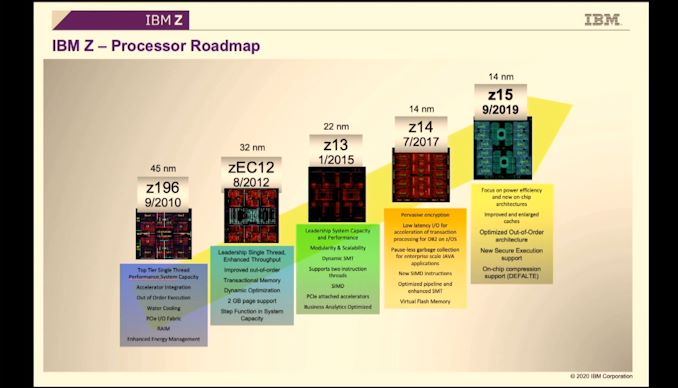 02:07PM EDT - These CPUs are ground up built by IBM and not used by anyone else 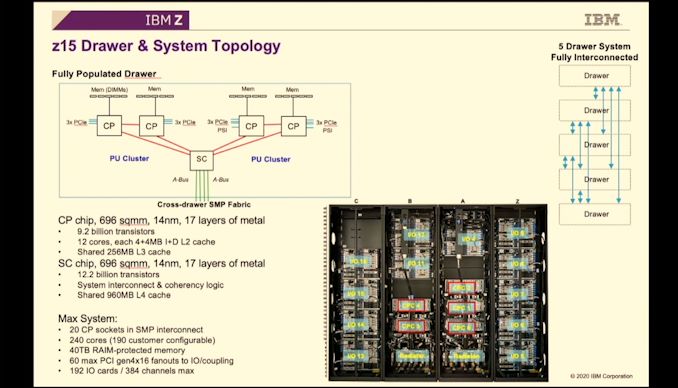 02:08PM EDT - 5 drawers are fully connected through the SC chips

02:08PM EDT - Max config supports 240 cores. 190 cores are customer available, others are for management or recovery 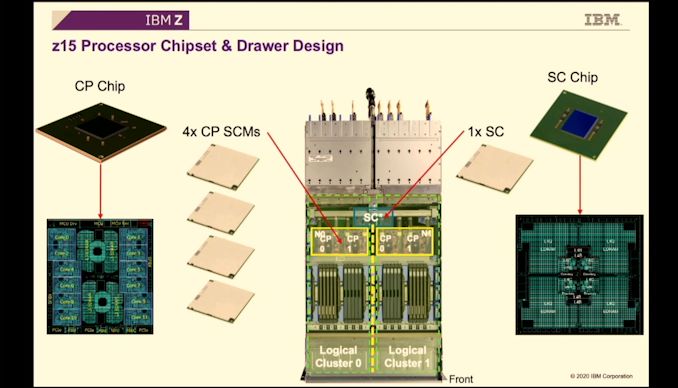 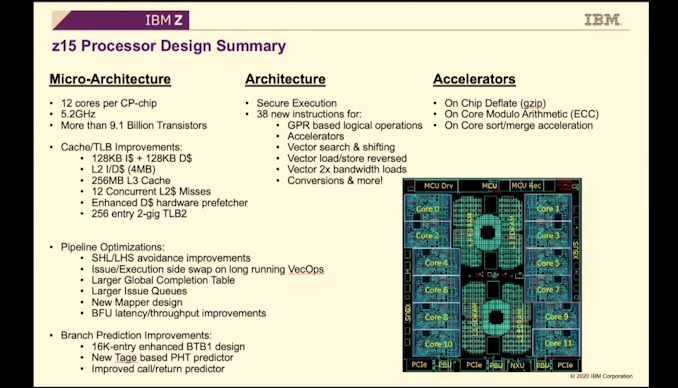 02:11PM EDT - speed up of common instructions in a smart way 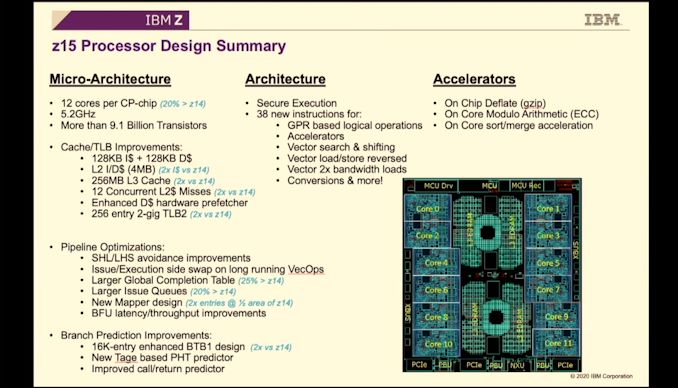 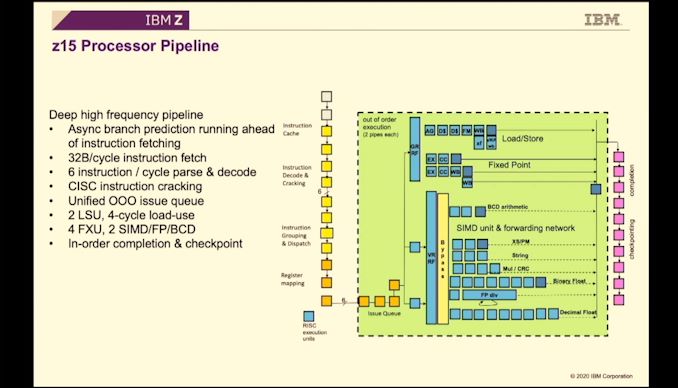 02:12PM EDT - recovering unit for when errors are detected - processor rolls back

02:13PM EDT - This allows for transient recovery from hardware errors

02:13PM EDT - Known good state can be transferred to a new core if non-transient error happens 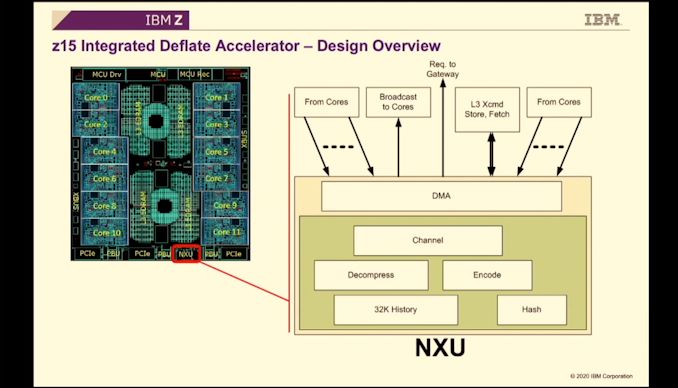 02:13PM EDT - The goal of these cores is to be recoverable, even when blasted with high-energy proton beams

02:15PM EDT - NXU is syncrhonous and runs in real time 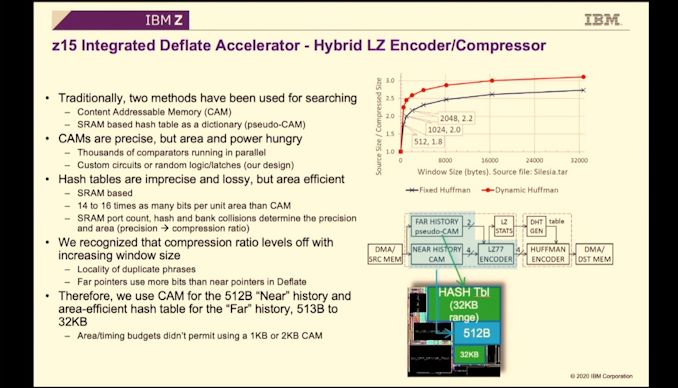 02:16PM EDT - Two main ways for compression - IBM uses both depending on the size to get the best results 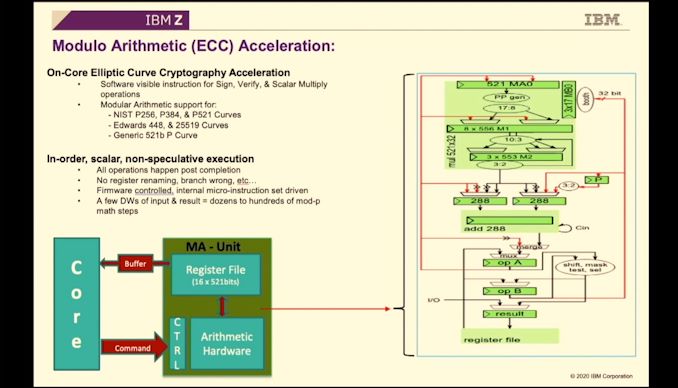 02:17PM EDT - Elliptic curve cryptography acceleration unit in each core, along with enhanced modulo unit which it relies on

02:17PM EDT - sign and verify is implemented as firmware and hardware

02:17PM EDT - Acts as a blueprint for future accelerators

02:17PM EDT - Attached to back-end of the pipeline

02:18PM EDT - All execution is in order and non-speculative

02:18PM EDT - physically these accelerators could be placed far away from core logic as needed

02:18PM EDT - dozens to hundreds of modulo ops with a couple of doubleword instructions 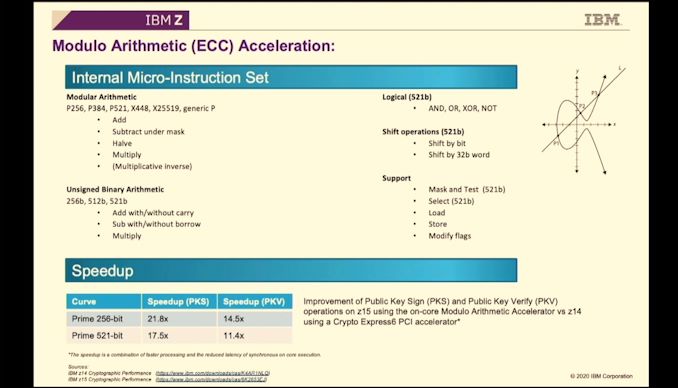 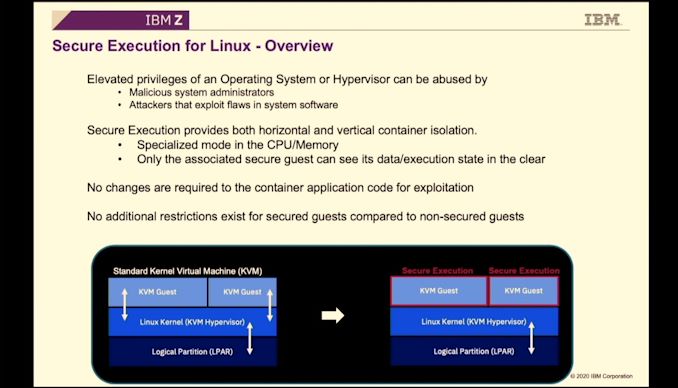 02:20PM EDT - ultravisor sits between the hypervisor and OS 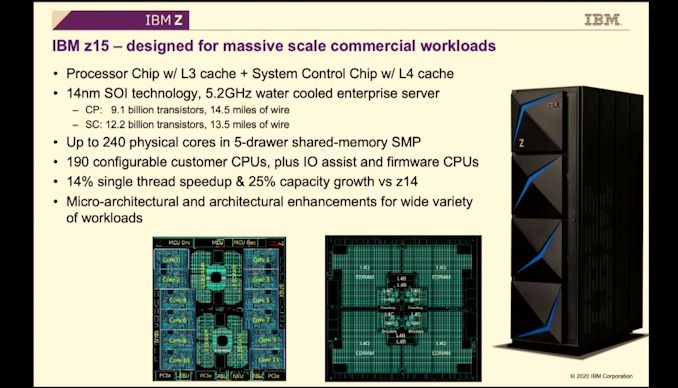 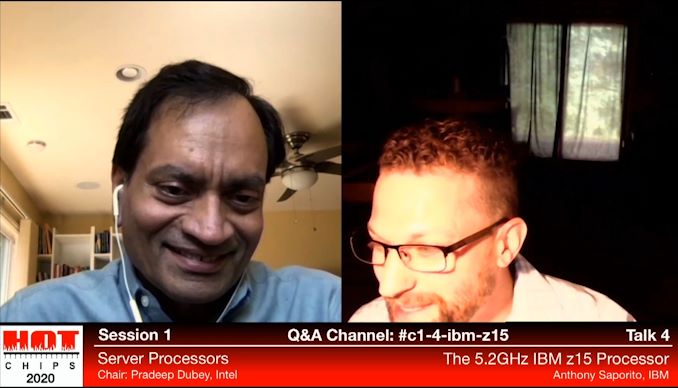 02:25PM EDT - Q: Pipeline depth? A: It's long! Long front end and back end and extends with the recovery

02:26PM EDT - Q: For secure execution, what is the isolation from firmware? A: Validated trusted firmware / ultravisor. That's an integral part of our secure guest security

02:27PM EDT - Q: Async branch prediction? What happens if it's behind i-fetch A: It's lossless, and i-fetch is in-order. After a pipeline restart, if i-fetch is ahead, the pipeline will react and throw away as required. There are syncs - there's a hard sync at dispatch, so no predictions are dropped

02:30PM EDT - Q: Is power/eff an important focus? A: It does consume less power than z14 that's similar configured. From a chip perspective, the focus wasn't to reduce overall power - the focus was on performance and throughput. That was done to put two more cores in and double caches - we burned the power budget to add in more performance. This is the sort of product this is. We stuff more hardware and acceleration.