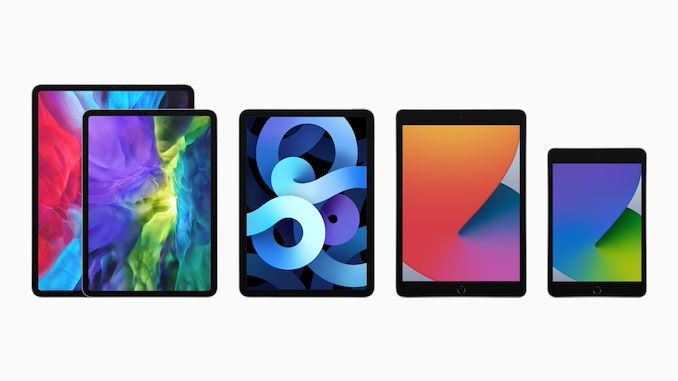 This year’s September Apple event has been relatively unusual, not only because of the pandemic and online-only nature of the show, but also because amongst the new hardware releases there’s been an evident lack of a new iPhone at this point in time.

Apple however didn’t disappoint, and managed to showcase brand-new iPads and Apple Watches. Amongst the new tablet line-up, we find the new 8th generation iPad which sees an upgrade in its computing capabilities with the new A12 chip, and the newest iPad Air which sees a total redesign, adopting the design queues of the iPad Pro siblings, and also for the first time introducing the new Apple A14 chipset – the industry’s first 5nm processor.

Starting off with the most exciting tablet today, which is the new iPad Air:

At the heart of the new tablet we find Apple’s newest A14 chip, which is a keystone component of the new generation devices and will also likely power the next generation iPhone once it gets released later this year. Apple’s event disclosures this year were a bit confusing as the company was comparing the new A14 metrics against the A12, given that’s what the previous generation iPad Air had been using until now – we’ll need to add some proper context behind the figures to extrapolate what this means. 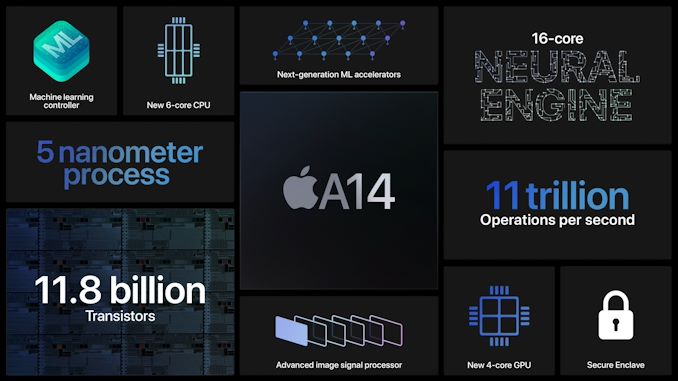 What we do know though is that it’s in reference to the A12 chipset, and the A13 already had claimed a 20% boost over that generation. Simple arithmetic thus dictates that the A14 would be roughly 16% faster than the A13 if Apple’s performance metric measurements are consistent between generations.

On the GPU side, we also see a similar calculation as Apple claims a 30% performance boost compared to the A12 generation thanks to the new 4-core GPU in the A14. Normalising this against the A13 this would mean only an 8.3% performance boost which is actually quite meagre.

In other areas, Apple is boasting more significant performance jumps such as the new 16-core neural engine which now sports up to 11TOPs inferencing throughput, which is over double the 5TOPs of the A12 and 83% more than the estimated 6TOPs of the A13 neural engine.

Apple does advertise a new image signal processor amongst new features of the SoC, but otherwise the performance metrics (aside from the neural engine) seem rather conservative given the fact that the new chip is boasting 11.8 billion transistors, a 38% generational increase over the A13’s 8.5bn figures.

The one explanation and theory I have is that Apple might have finally pulled back on their excessive peak power draw at the maximum performance states of the CPUs and GPUs, and thus peak performance wouldn’t have seen such a large jump this generation, but favour more sustainable thermal figures. What speaks against such a theory is that Apple made no mention at all of power or power efficiency this generation, which is rather very unusual given they’ve always made a remark in regards to this aspect of the new designs. We’ll have to see if this is indicative of the actual products, of it’s just a side-effect of the new more streamlined presentation style of the event.

Whatever the performance and efficiency figures are, what Apple can boast about is having the industry’s first ever 5nm silicon design. The new TSMC-fabricated A14 thus represents the cutting-edge of semiconductor technology today, and Apple made sure to mention this during the presentation. 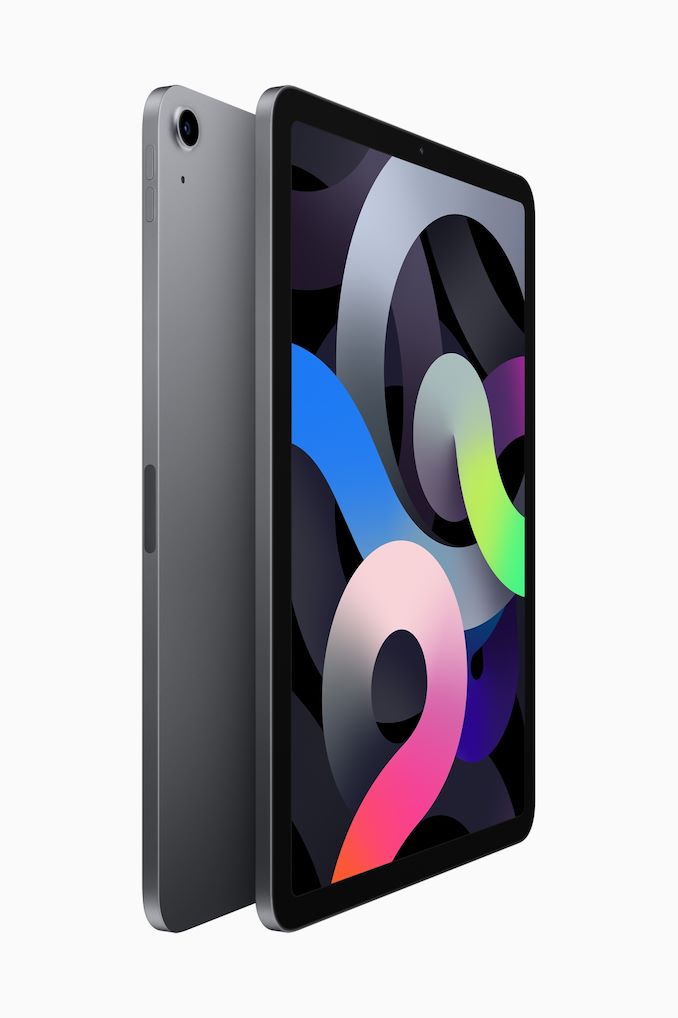 Coming back to the iPad Air, the new tablet is a complete redesign for the mid-range device, and now adopts the new design language that had been introduced with the latest iPad Pro models over the last generations. This means a new thinner bezel design and the loss of the home button.

Centre-stage we find a new 10.9” liquid retina IPS LCD panel with a 2360 x 1640 resolution. The panel comes with all bells and whistles you expect from Apple, such as a full lamination manufacturing process to enable better contrast and a “pop-out” feeling, True Tone and a Display P3 colour gamut. 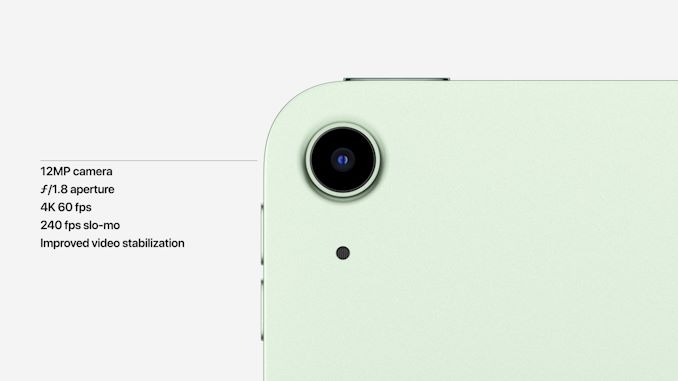 We’re seeing the adoption of the same 12MP 1.22µm pixel sensor as on the recent generation iPad Pro models, sporting a for a tablet relatively large f/1.8 aperture. 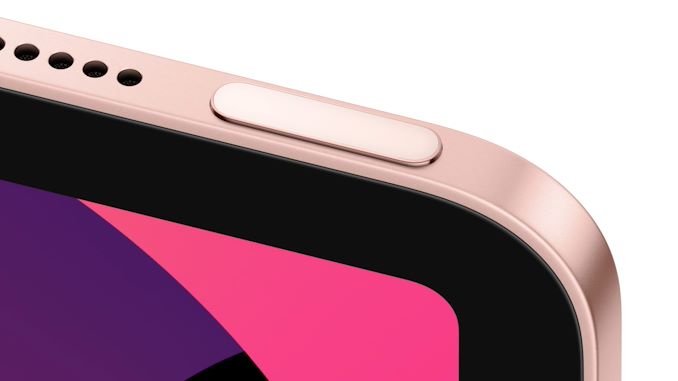 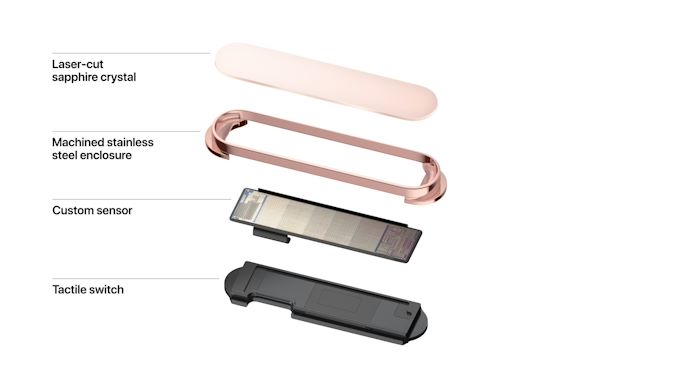 Interestingly, because of the removal of the TouchID home button on the tablet, Apple has opted to not just solely rely on Face ID, but to introduce a new fingerprint scanner on the frame of the device. The new capacitive design isn’t exceptionally novel in the industry, however it’s the first time that we see Apple employ such a unit in their products. 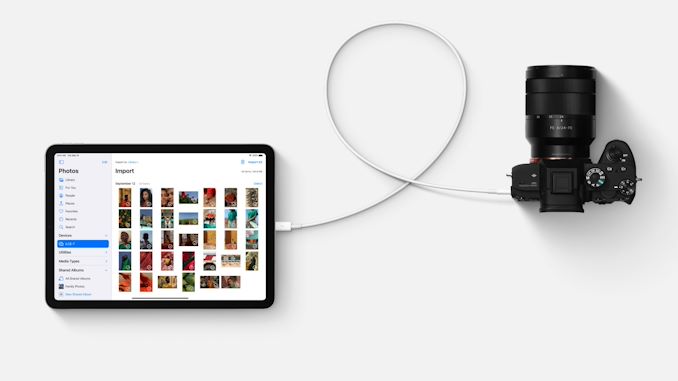 Another big noteworthy change in the new iPad Air is the fact that it’s now using a USB-C connector rather than Lightning. Apple here explains that the new connector allows for much faster transfer speeds between more devices. It’s a much welcome addition to the new generation, and we’re still crossing our fingers that Apple will make the same choice on the next-gen iPhone.

Also announced today was Apple’s new 8th generation iPad. The lower-entry tablet here largely retains the specifications of its predecessor when it comes to form-factor, display, cameras and connectivity. 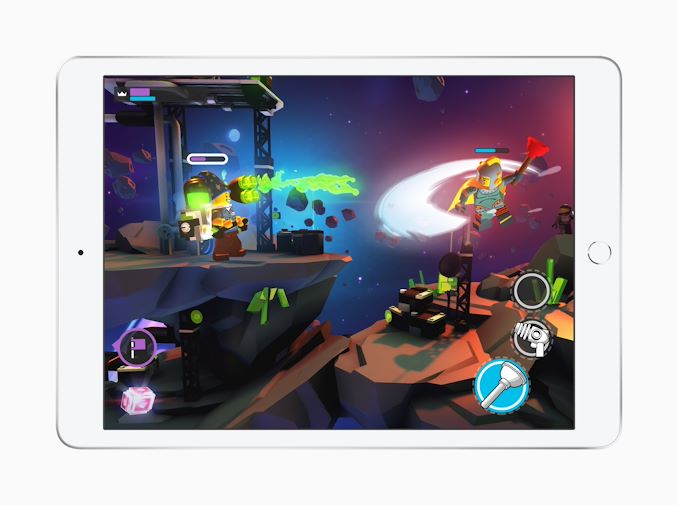 The big improvement for this generation is the move from the A10 chip to the newer A12 generation. Although it’s not the newest silicon, at this price range the upgrade represents a massive performance boost, and now it means that even the lowest-end iPad supports high-performance machine learning through the inclusion of the Neural Engine.

The new iPad Air will commence at $599 which is an uptick in terms of price range compared to its predecessor. The upgrade from 64GB to 256GB storage costs an extra $130, whilst cellular LTE connectivity over the basic Wi-Fi models costs an extra $150 as well. Oddly enough, availability of the iPad Air will only start in October, which is unusual for an Apple launch.

The 8th generation iPad starts at the same prices as the 7th gen, meaning $329 for the basic 32GB Wi-Fi model, with an extra $130 for the 128GB variant, and an extra $100 for cellular connectivity. Availability for the new iPad starts this Friday the 18th.