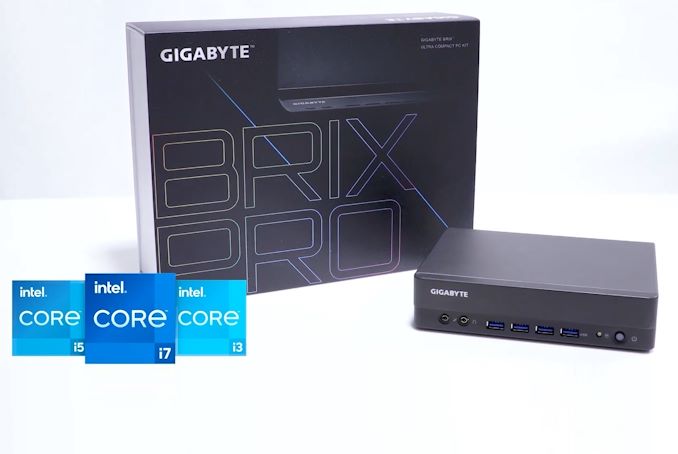 Intel's Tiger Lake launch was focused on ultrabooks and notebooks, as various SKUs with TDP ranging from 7 to 28W were launched. The performance of Intel's low-power parts (U- and Y-series) have been good enough to land them inside small and ultra-compact form-factor systems. These systems have become a big hit in the market (not least, Intel's own NUC systems) since they gained prominence in the early 2010s. Vendors such as ASRock, ASUS, ECS, and GIGABYTE also jumped on this bandwagon to market 'NUCs' under their own branding. GIGABYTE was one of the early ones to do so with their BRIX series of mini-PCs. These SFF and UCFF systems find applications in multiple areas including content creation, productivity, and gaming, as well as embedded systems applications such as digital signage.

Intel's Tiger Lake-based NUCs (Panther Canyon and Phantom Canyon) are an open secret in tech circles. ASRock Industrial's Tiger Lake NUCs such as the NUC BOX-1165G7 have also been hinted at in Intel's marketplace - a retail follow-up to the embedded market-focused iBOX 1100 and NUC 1100 solutions. GIGABYTE, however, became the first vendor to officially announce Tiger Lake-based mini-PCs targeting the retail market with the launch of the GIGABYTE BRIX PRO. Three models (BSi3-1115G4, BSi5-1135G7, and the BSi7-1165G7) are being introduced. Their specifications are summarized in the table below.

One of the unique aspects of the units is the availability of 4x HDMI 2.0 ports - each capable of driving a 4Kp60 display. In addition, a Thunderbolt 4 port (with a display output capability of 8Kp60) is also available. The system can drive four of those five display outputs simultaneously. Segments of the chassis are metallic, allowing for the Wi-Fi antenna to magnetically clasp to it.

The Tiger Lake-U processor can be configured with different PL2 values depending on the power delivery circuitry. GIGABYTE believes that the robustness of its board design, coupled with the 135W external power adapter can sustain upwards of 70W for the PL2 setting.