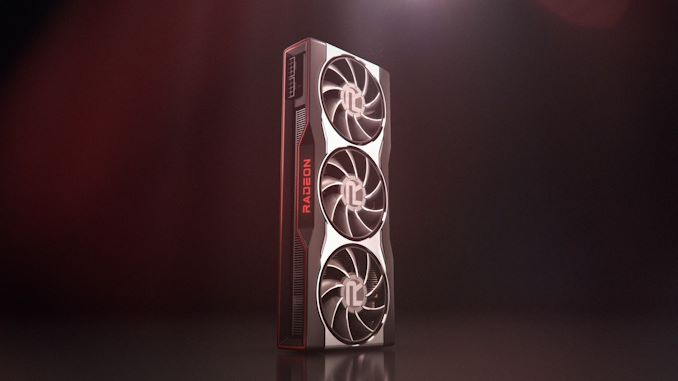 As part of today’s Zen 3 desktop CPU announcement from AMD, the company also threw in a quick teaser from the GPU side of the company in order to show off the combined power of their CPUs and GPUs. The other half of AMD is preparing for their own announcement in a few weeks, where they’ll be holding a keynote for their forthcoming Radeon RX 6000 video cards.

With the recent launch of NVIDIA’s Ampere-based GeForce RTX 30 series parts clearly on their minds, AMD briefly teased the performance of a forthcoming high-end RX 6000 video card. The company isn’t disclosing any specification details of the unnamed card – short of course that it’s an RDNA2-based RX 6000 part – but the company did disclose a few choice benchmark numbers from their labs. 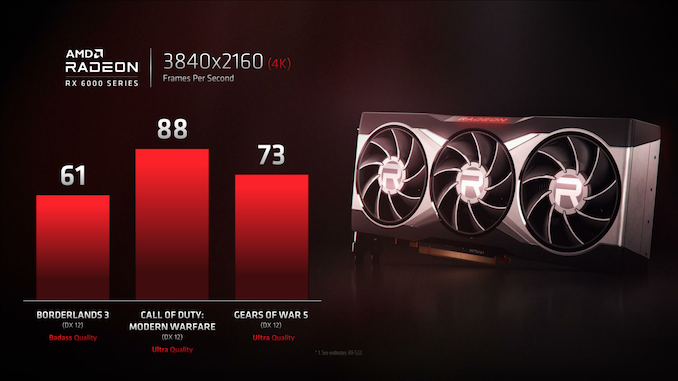 Dialing things up to 4K at maximum quality, AMD benchmarked Borderlands 3, Gears of War 5, and Call of Duty: Modern Warfare (2019). And while these are unverified results being released for marketing purposes – meaning they should be taken with a grain or two of salt – the implied message from AMD is clear: they’re aiming for NVIDIA’s GeForce RTX 3080 with this part.

Assuming these numbers are accurate, AMD’s Borderlands 3 performance are practically in lockstep with the 3080. However the Gears 5 results are a bit more modest, and 73fps would have AMD trailing by several percent. Finally, Call of Duty does not have a standardized benchmark, so although 88fps at 4K looks impressive, it’s impossible to say how it compares to other hardware.

Meanwhile, it’s worth noting that as with all vendor performance teases, we’re likely looking at AMD’s best numbers. And of course, expect to see a lot of ongoing fine tuning from both AMD and NVIDIA over the coming weeks and months as they jostle for position, especially if AMD’s card is consistently this close.

Otherwise, the biggest question that remains for another day is which video card these performance numbers are for. It’s a very safe bet that this is AMD’s flagship GPU (expected to be "Big Navi", Navi 21), however AMD is purposely making it unclear if this is their lead configuration, or their second-tier configuration. Reaching parity with the 3080 would be a big deal on its own; however if it’s AMD’s second tier-card, then that would significantly alter the competitive landscape.

Expect to find out the answers to this and more on October 28th, when AMD hosts their Radeon RX 6000 keynote.