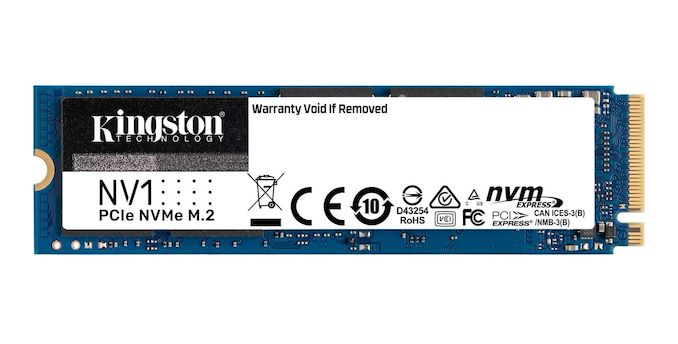 As previewed at CES, Kingston's newest entry-level consumer NVMe SSD is now shipping. The new NV1 uses a similar strategy to Kingston's entry-level SATA drives like the A400, where Kingston is not guaranteeing a specific set of internal components and expects to mix controllers and NAND to hit the cheapest price points. That results in very conservative performance and endurance specifications: sequential transfers around 2GB/s and endurance ratings around 0.2 DWPD for three years.

The Kingston NV1 uses DRAMless SSD controllers like the Phison E13T and Silicon Motion SM2263XT, which are both getting a bit old but are still sufficient to offer a step up from SATA performance. The NAND will tend to be TLC on the smaller capacities and QLC for at least the 2TB model, but realistically Kingston could use either type of NAND on any of the capacities depending on market conditions.

The NV1 is a more low-end drive than Kingston's existing A2000 NVMe SSD, which uses TLC NAND and has DRAM, but uses the 4-channel SM2263 controller rather than a more mainstream 8-channel controller. The NV1 does reflect the market's shift toward higher capacities, with the product line starting at 500GB and going up to 2TB. We expect retail prices for the NV1 will end up cheaper than the A2000, but for the moment the pricing direct from Kingston is only marginally cheaper. The NV1 has been listed on CDW with pricing that is generally competitive with other low-end NVMe drives.