The Smartset App is very different than the majority of similar software packages, largely due to the fact that it does not run in the background to monitor or intercept the keyboard’s commands. Instead, it is an interface used to hard-program the keyboard itself. As an added perk of this design, the Smartset software is a portable application, and does not require installation.

Overall, the TKO Tournament is a fully programmable keyboard and can store up to nine different profiles, but the innovation here is that everything is stored inside the keyboard. Every change that is saved while using the SmartSet app is permanent, meaning that the keyboard will retain all of its programmed profiles, commands, lighting effects, macros, and everything else, regardless of the device is it plugged in. Once it is programmed, the keyboard requires no software to perform any of the programmed functions, and even the device’s OS is mostly irrelevant, save for any programmed OS-specific commands (if present).

This element underscores the portability aspect of the TKO Tournament Gaming keyboard. Gamers can take it with them and use the keyboard with any machine, all without any configuration or support required by the host system. 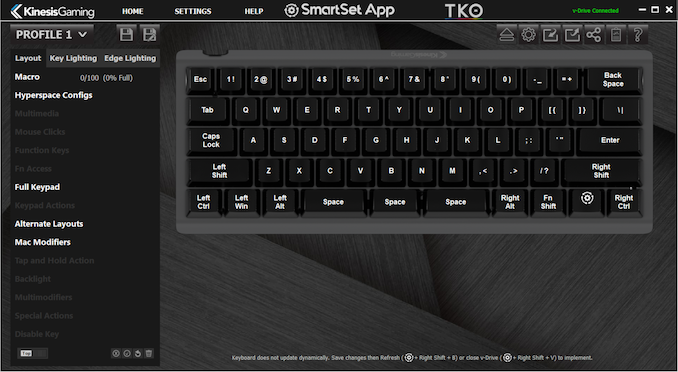 This portability does somewhat limit the advanced programming capabilities of the software, though. While multimedia functions, special characters, and even mouse clicks can be tethered to any key, advanced commands such as the launching of third-party applications are not supported. That is because no external device can actually “tell” the OS what to launch. An installed application can do so, which is why most of the competition supports this function, but that is not something one can implement on a device that requires no software at all. 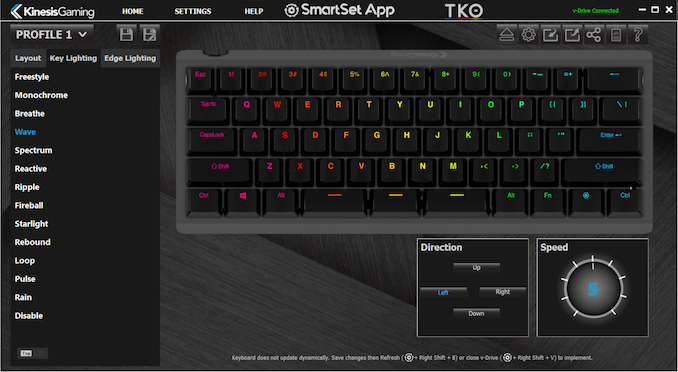 In the few years that we've been covering Kinesis keyboards, the company has continued to considerably develop their SmartSet application. It now has a two-fold configuration screen, split between layout and lighting programming. A third tab controls the edge lighting as well. The interface is cleaner and there clearly are more configuration options than just a few versions ago. There are also buttons that can initiate a tutorial, updates, profile import and export commands, and global configuration changes. 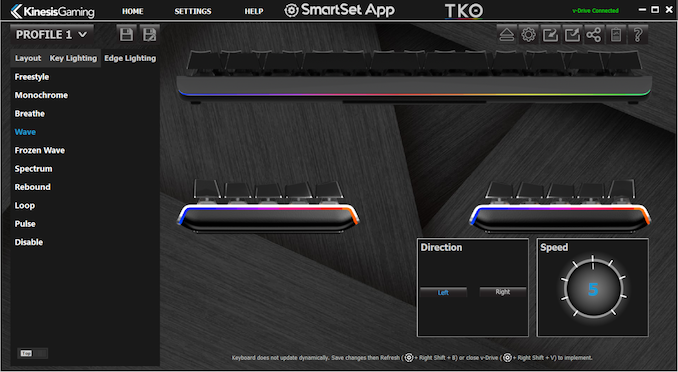 The second page of the software allows for lighting programming. It is relatively simple to program the lighting effects per profile, with several pre-programmed visual effects already present. If a pre-programmed effect is selected, the user can adjust its direction and speed. Per-key manual programming is also possible. 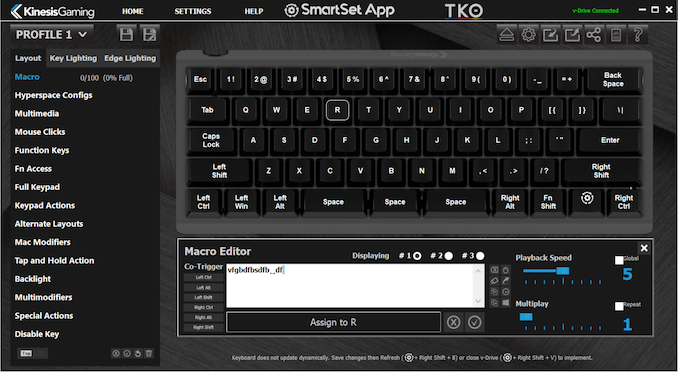 Users can reprogram any key. The keyboard supports nine profiles and, with two layers each, that is quite a lot of possible layout variations. Aside from simple layout changes, users can also tether advanced functions, keystrokes, or even complete macros to every single key. Advanced functions may be limited by what the keyboard can actually do without having to use any installed software but Kinesis does offer a hoard of options, ranging from multimedia controls to multimodifiers. Mouse clicks also are available, but mouse movements commands are not. 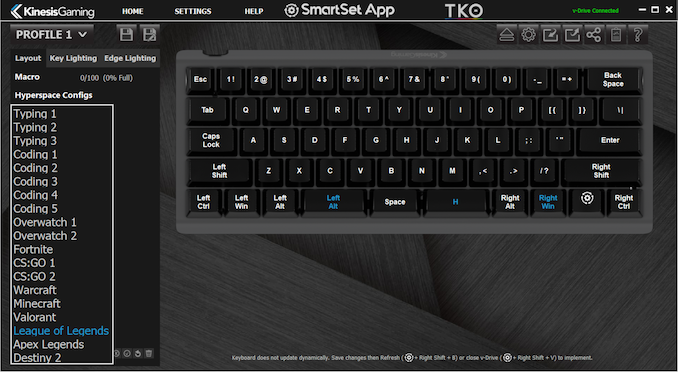 The Macro recorder is relatively basic. The initial version of the recorder was limited to simple keystroke combinations but Kinesis evolved it a bit and it now supports delay programming. There is also a repeat option but is limited to nine iterations. The playback speed of the macros can be either individually adjusted or set to follow the “global” setting. 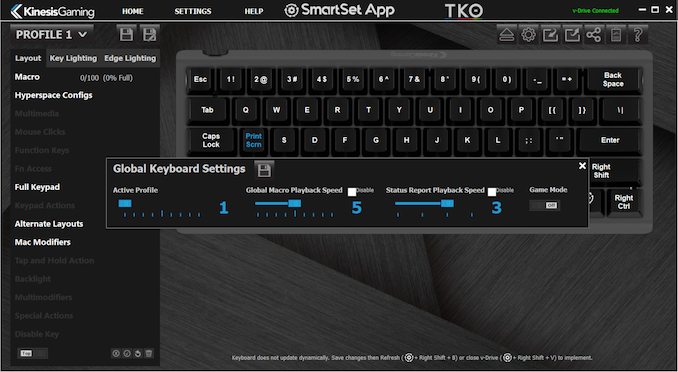 One of the unique aspects of the macro programmer is that the user can select a “trigger” key per particular macro. The trigger key is one of the Shift, Alt, or Ctrl keys. Launching the macro requires the trigger key to be pressed prior to pressing the key that the macro is tethered to. This way, it is possible to store several different macros into any single key, as long as they use a different trigger.

At this point, we must emphasize that one must not forget to click on the “save” button after making any changes. Everything, from layout changes to lighting effects, is stored in the keyboard’s internal vDrive memory. If the software is closed without saving the changes or if the keyboard is disconnected from the system, any and all changes will be discarded.