At the heart of the Google Tensor, we find the TPU which actually gives the chip is marketing name. Developed by Google with input and feedback by the team’s research teams, taking advantage of years of extensive experience in the field of machine learning, Google puts a lot of value into the experiences that the new TPU allows for Pixel 6 phones. There’s a lot to talk about here, but let’s first try to break down some numbers, to try to see where the performance of the Tensor ends up relative to the competition.

We start off with MLCommon’s MLPerf – the benchmark suite works closely with all industry vendors in designing something that is representative of actual workloads that run on devices. We also run variants of the benchmark which are able to take advantage of various vendors SDKs and acceleration frameworks. Google had sent us a variant of the MLPerf app to test the Pixel 6 phones with – it’s to be noted that the workloads on the Tensor run via NNAPI, while other phones are optimised to run through the respective chip vendor’s libraries, such as Qualcomm’s SNPE, Samsung’s EDEN, or MediaTek’s Neuron – unfortunately only the Apple variant is lacking CoreML acceleration, thus we should expect lower scores on the A15.

Starting off with the Image Classification, Object Detection, and Image Segmentation workloads, the Pixel 6 Pro and the Google Tensor showcase good performance, and the phone is able to outperform the Exynos 2100’s NPU and software stack. More recently, Qualcomm had optimised its software implementation for MLPerf 1.1, able to achieve higher scores than a few months ago, and this allows the Snapdragon 888 to achieve significantly better scores than what we’re seeing on the Google Tensor and the TPU – at least for those workloads, in the current software releases and optimisations.

The Language Processing test of MLPerf is a MobileBERT model, and here for either architectural reasons of the TPU, or just a vastly superior software implementation, the Google Tensor is able to obliterate the competition in terms of inference speed.

In Google’s marketing, language processing, such as live transcribing, and live translations, are very major parts of the differentiating features that the new Google Tensor enables for the Pixel 6 series devices – in fact, when talking about the TPU performance, it’s exactly these workloads that the company highlights as being the killer use-cases and what the company calls state-of-the-art.

If the scores here are indeed a direct representation of Google’s design focus of the TPU, then that’s a massively impressive competitive advantage over other platforms, as it represents a giant leap in performance. 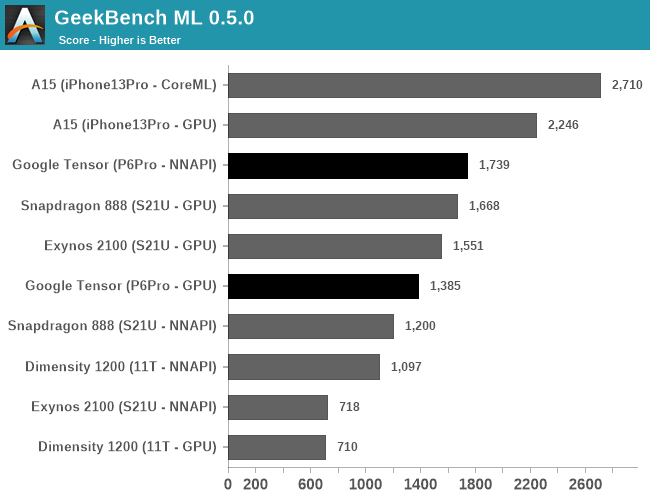 Other benchmarks we have available are for example GeekBench ML, which is currently still in a pre-release state in that the models and acceleration can still change in further updates.

The performance here depends on the APIs used, with the test either allowing TensorFlow delegates for the GPU or CPU, or using NNAPI on Android devices (and CoreML on iOS). The GPU results should only represent the GPU ML performance, which is surprisingly not that great on the Tensor, as it somehow lands below the Exynos 2100’s GPU.

In NNAPI mode, the Tensor is able to more clearly distinguish itself from the other SoCs, showcasing a 44% lead over the Snapdragon 888. It’s likely this represent the TPU performance lead, however it’s very hard to come to conclusions when it comes to such abstractions layer APIs. 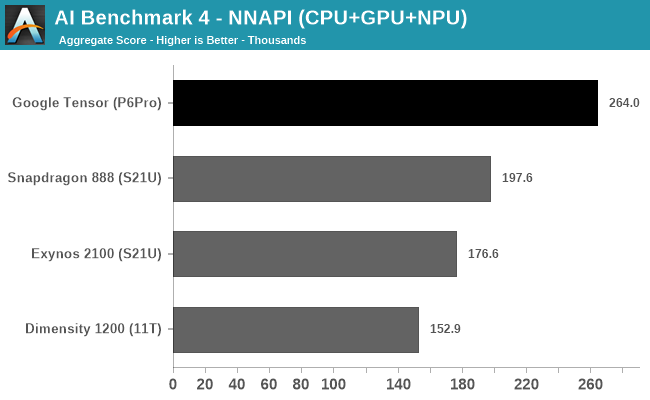 In AI Benchmark 4, when running the benchmark in pure NNAPI mode, the Google Tensor again showcases a very large performance advantage over the competition. Again, it’s hard to come to conclusions as to what’s driving the performance here as there’s use of CPU, GPU, and NPUs.

I briefly looked at the power profile of the Pixel 6 Pro when running the test, and it showcased similar power figures to the Exynos 2100, which extremely high burst power figures of up to 14W when doing individual inferences. Due to the much higher performance the Tensor showcases, it also means it’s that much more efficient. The Snapdragon 888 peaked around 12W in the same workloads, so the efficiency gap here isn’t as large, however it’s still in favour of Google’s chip.

All in all, Google’s ML performance of the Tensor has been its main marketing point, and Google doesn’t disappoint in that regard, as the chip and the TPU seemingly are able to showcase extremely large performance advantages over the competition. While power is still very high, completing an inference faster means that energy efficiency is also much better.

I asked Google what their plans are in regards to the software side of things for the TPU – whether they’ll be releasing a public SDK for developers to tap into the TPU, or whether things will remain more NNAPI centric like how they are today on the Pixels. The company wouldn’t commit yet to any plans as it’s still very early – in generally that’s the same tone we’ve heard from other companies as even Samsung, even 2 years after the release of their first-gen NPU, doesn’t publicly make available their Eden SDK. Google notes that there is massive performance potential for the TPU and that the Pixel 6 phones are able to use them in first-party software, which enables the many ML features for the camera, and many translation features on the phone.