NVIDIA this morning has made an unexpected news drop with the announcement of a trio of new GeForce laptop GPUs. Joining the GeForce family next year will be a new RTX 2000 series configuration, the GeForce RTX 2050, as well as an update to the MX lineup with the addition of the GeForce MX550 and GeForce MX570. The combination of parts effectively provide a refresh to the low-end/entry-level segment of NVIDIA’s laptop product stack, overhauling these products in time for new laptops to be released next year.

While the announcement of these parts makes sense in context, the timing of this announcement is a bit odd, to say the least. NVIDIA is dropping this news not only on a Friday (a day normally reserved for bad news), but the last working Friday of the year at that – most of the tech industry has the remaining two Fridays off. So make of that what you will.

Still, with CES 2022 starting bright and early on January 3rd, 2022, there’s little time left to announce anything that won’t be announced at the show itself or needs to be announced ahead of it. So it looks like NVIDIA is laying the groundwork for some partner laptop announcements next month, as OEMs will want new(er) laptop video card SKUs to pair with the new laptop CPUs that we’re expecting to come out in the first part of 2022.

More curious, perhaps, is that NVIDIA’s announcement today is for laptop parts that the company doesn’t expect to hit retail shelves until the Spring of 2022. It’s not unusual for OEM parts such as laptop GPUs to be announced a fair bit in advance, since laptops themselves tend to get announced ahead of time. However as it’s still (barely) Fall – we haven’t even reached Winter yet – Spring of 2022 is still over 3 months off, so NVIDIA is announcing these low-end parts well in advance of when they’re expected to reach consumer hands. We’ll see how things play out at CES, but this may be a sign that the industry is going to jump the gun a bit and use the show to announce laptops that won’t be available until a few months later (CES is a fixed point in time; hardware dev cycles aren’t).

Diving into the hardware itself, let’s start with the GeForce RTX 2050. The fastest of the new laptop accelerators announced today, it’s also the most curious, for two reasons. First and foremost, this is the second time this month that NVIDIA has issued a new GeForce RTX 2000 series SKU, following the 12GB desktop RTX 2060 last week. Secondly, this is a very odd configuration, as it’s fully RTX-enabled, RT cores and all; but NVIDIA never produced a low-end Turing TU10x chip with those features.

Update: NVIDIA has since responded to us and informed us that, despite the RTX 2000 series naming, RTX 2050 is based on Ampere, not Turing. Specifically, GA107, the same GPU used in the RTX 3050 series.

From a high-level perspective, NVIDIA is clearly doing the tech industry equivalent of rummaging through the pantry and cooking up whatever is left over. The chip crunch means that NVIDIA is already producing every Ampere (GA10x) chip they can on Samsung’s 8nm process, so they are completely capacity constrained there. This means that NVIDIA is looking to salvage virtually every last die that they can, and even though RTX 3050 is already itself based on a less-than-fully-functional GA107 die, NVIDIA is now going one step further by creating a further cut-down GA107 SKU. Meanwhile this also helps to keep the low-end of NVIDIA's product stack competitive, both against AMD's dGPUs and the ever-increasing performance of integrated GPUs.

Much odder, however, is NVIDIA's decision to classify the new SKU as an RTX 2000 series part. Which, for the previous 3 years, has been exclusively comprised of Turing TU10x parts. NVIDIA has not provided an explanation for this decision (and I doubt they ever will), but for now it means that the RTX 20 series will live on for another generation in some fashion thanks to the inclusion of an Ampere-based product. And while this just made talking about NVIDIA's laptop GPU lineup a whole lot harder, it's hard to particularly chide NVIDIA here since this is an Ampere part playing down a level (as it were), as opposed to the more common (and much loathed) tradition of rebadging older parts in order to satisfy OEM demands.

So what is the RTX 2050? We're essentially looking at an additional salvage bin of the GA107 GPU that is designed to occupy a slot below the Ampere-based RTX 3050 for Laptops. The RTX 2050 comes with 2048 CUDA cores – the same as the RTX 3050 – but is aimed at low-power configurations, so it has relatively low clockspeeds as a result. NVIDIA’s official figures for the boost clock are just 1155MHz to 1477MHz. On paper, this gives it a total throughput of between 4.7 TFLOPS and 6.0 TFLOPS.

And being that this is an RTX-branded part, it is fully RTX enabled, as NVIDIA likes to put it. That means it ships with both tensor cores and ray tracing (RT) cores enabled, and making the RTX 2050 the lowest-power/lowest-performing SKU to come with these features. In practice I have significant doubts that such a slow Ampere part can do ray tracing fast enough to be useful. However the inclusion of the tensor cores should be good news for anyone who’s good with using DLSS to enhance sub-native resolution rendering.

And you’ll be doing a lot of lower-resolution gaming with the RTX 2050, as the biggest cutback to the underlying GA107 GPU is to its memory controllers. NVIDIA has disabled half of GA107's memory controllers, leaving it with a very narrow 64-bit memory bus. So while RTX 2050 has what we believe to be 32 ROPs to push pixels (the same as RTX 3050), it’s quite light on the memory bandwidth that would be needed to keep those ROPs fully fed. Bus width aside, NVIDIA is using 14Gbps GDDR6 here, so the SKU gets (up to) 112GB/second of memory bandwidth, which is a straight one-half the bandwidth of the RTX 3050. Meanwhile the narrow memory bus means that laptop vendors can get away with a rather small physical implementation – they’d need just 2 GDDR6 chips to pair with the already fairly small GA107 GPU.

The cut-down memory bus also is a big component in keeping power utilization of the RTX 2050 down. NVIDIA is aiming it for 30W to 45W configurations, which is close to their traditional power window for the MX series of laptop GPUs, and at the upper bound is about half of what RTX 3050 scales up to. Typically, these lower-power SKUs get paired with low-power CPUs (e.g. Intel H35 series), but given the chip shortage, I wouldn’t be surprised to see laptop vendors pair them with just about anything that needs a dGPU.

And for those pairings, laptop vendors will need to make sure they’re using a chip with an integrated GPU. According to NVIDIA’s specifications, they have disabled all of the chip’s display outputs, so there are no HDMI or DisplayPort headers available to drive laptop or external displays. Put another way, Optimus is the only configuration supported, as the iGPU will be needed to drive the screen. In practice this isn’t a very big shift since most laptops use Optimus configurations to begin with, but let it be noted that NVIDIA has explicitly removed any option to use the RTX 2050 alone. Unfortunately, this also means that G-Sync is not supported in any fashion.

Ultimately, if nothing else, RTX 2050 is going to go down in history as one of the weirder laptop SKUs that NVIDIA has ever released. But with the chip crunch seemingly remaining with us for some time yet, NVIDIA and other chip vendors are going to get increasingly creative to get any chips they can on the market. The resulting performance of this SKU won’t be anything worth writing home about, I suspect – it’s very much a low-end SKU – but if it’s meaningfully faster than integrated graphics, then it’s filling a much-needed role right now.

Compared to the RTX 2050, NVIDIA’s new entry-level laptop GPUs are decidedly more traditional. NVIDIA’s MX series of laptop GPUs take up the very bottom of NVIDIA’s product stack, and are the first step above integrated graphics in most laptop designs. These parts are also commonly used for adding dGPUs to thin and light laptops, given the relatively small sizes of the chips used, as well as their low TDPs.

Last updated back in August of 2020 with the GeForce MX450, for this generation of the MX series NVIDIA has brought back a two-chip stack. This gives us the MX550, and the faster MX570.

Unfortunately, NVIDIA is notoriously mum when it comes to officially disclosing the specifications of the MX series, and this year is no different. So we don’t have any specifications to share with you with respect to CUDA cores, ROPs, clockspeeds, or memory configurations. NVIDIA isn’t even offering a “GeForce Performance Score” estimate for these parts, which in previous generations was a basic estimate of performance versus Intel’s most recent integrated GPU. So there’s very little we can definitively tell you besides the fact that these parts exist – or at least, will exist in the Spring of 2022.

Inevitably, once these parts start shipping someone will be about to query them and document their configuration details. But for the moment we can at least take a couple of educated guesses based on a few choice disclosures from NVIDIA, as well as their published photos. 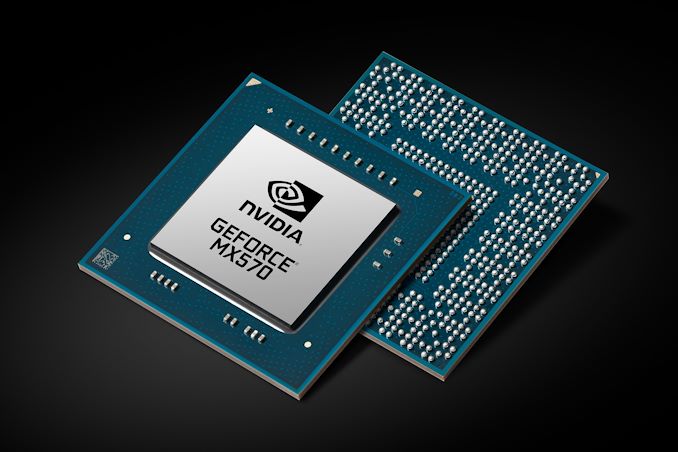 First and foremost, NVIDIA’s literature confirms that MX550 is based on the Turing architecture. The last-generation MX450 was based on the TU117 GPU, and this is the logical choice for this generation as well. NVIDIA is not disclosing the number of CUDA cores enabled on MX550, but they are disclosing that it’s more CUDA cores than the MX450, which came in at 896 CUDA cores. So it would seem that MX550 is 1024 CUDA cores – a full TU117 configuration. In the strictest sense this avoids the MX550 being a pure rebadge, but given the relatively small changes, I wouldn't expect it to perform significantly higher than the MX450 before it.

Meanwhile MX570 makes no mention of Turing. Instead, NVIDIA mentions “more power-efficient CUDA Cores.” And, after checking with the company, NVIDIA has since confirmed that, unlike MX550, MX570 is an Ampere-based part using GA107. This effectively makes it the smaller sibling to the new RTX 2050. This comes as a bit of a surprise, since NVIDIA tends to stick to a single GPU for the MX series – but it's clearly has been (and is going to be) that kind of year.

Both SKUs are also slated to come with faster memory. MX450 was typically seen with 10Gbps GDDR6, so it’s a relatively safe assumption that NVIDIA is pairing the new MX500 parts with 12Gbps GDDR6. The MX series has always been equipped with a 64-bit memory bus, so that is almost certainly the same situation here. In which case we’re looking at 96GB/sec of memory bandwidth.

Past that, NVIDIA is offering no further details. The MX series is not sold on the basis of features, and NVIDIA is offering no indication that the Ampere-based MX570 has any of its advanced features enabled, such as the RT or tensor cores. For all practical purposes, it's functionally closer a feature level 12_1 SKU, rather than 12_2/DirectXU as the hardware is capable of.