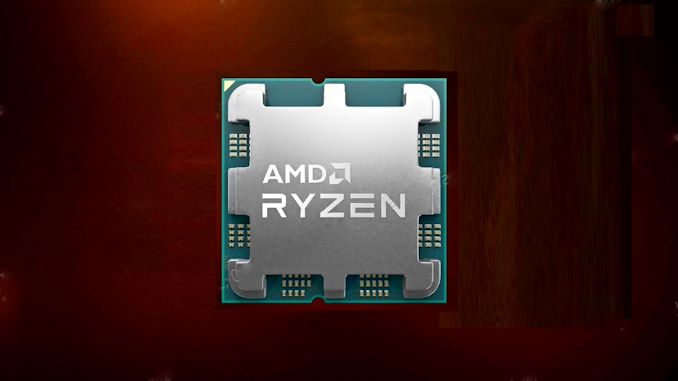 One of the things I look forward to every year is whether the major companies I write about are prepared to showcase their upcoming products in advance – because the year starts with the annual CES trade show, this is the perfect place. A company that’s able to present its 12-month portfolio comes across as confident in its ability to deliver, and it also gets the rest of us salivating at the prospect of next-generation hardware. This time around AMD steps up to the plate to talk about its new V-Cache CPU coming soon, and its new Zen 4 platform coming in the second half of the year.

Every CPU has levels of internal memory, known as cache, which starts as a bank of ‘Level 1’ fast but small memory, rising up to a ‘Level 2’ medium-sized medium speed memory, and then a ‘Level 3’ larger sized slower memory. Beyond this there’s the main DDR memory, which is super big, but super slow in comparison – main memory is 100x slower to access, but can hold a lot more data.

Last year AMD announced that it had been working on stacked onboard memory in the form of cache. This V-Cache concept took one of the standard 8 core chiplets from the Ryzen 5000 series, which already had 32 MB of L3 cache, and stacked on top of it another 64 MB of L3 cache, giving a total of 96 MB. Stacking chips is difficult, and AMD has been working with TSMC to productize this advanced packaging technique. 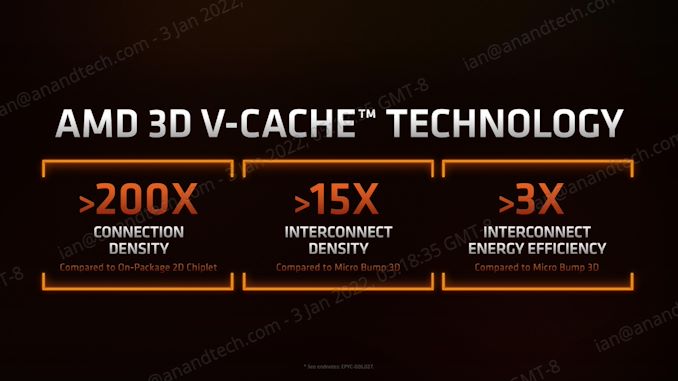 The main 8-core chiplet, built on TSMC 7nm, measures 82 mm2. This extra stacked chiplet is only 36 mm2, and sits directly above the cache already on the chip, so it does not cover the cores. The extra 64 MB of L3 cache chiplet is manufactured on a version of TSMC 7nm that is optimized for cache density, and so AMD has placed 64 MB on top of 32 MB directly. The cores are not covered for thermal reasons – the cores are where the power is used, and so thermal spaces are placed on top to make the top of the combined chip fully flat.

AMD stated last year that it would be manufacturing consumer and enterprise versions of this increased cache in 2021 for launch in 2022. At the Data Center event last year in November, AMD announced the version that would go into servers, and called it Milan X. For consumers, AMD is announcing today what this increased cache version of Ryzen looks like. Introducing, the Ryzen 7 5800X3D. 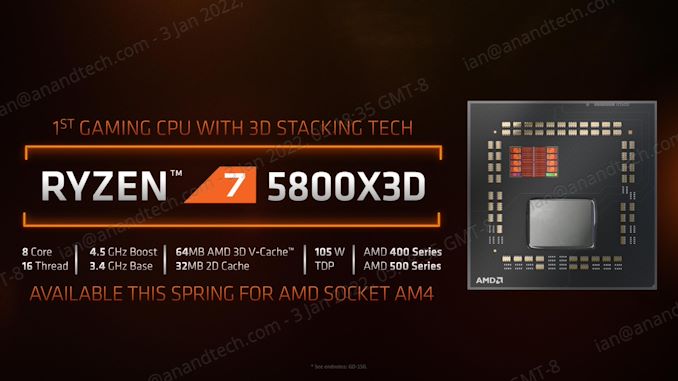 The processor will launch in the Spring (March/April we think), and exact pricing is yet to be announced.

For those that have been following AMD’s V-Cache news over this past year, I bet you have exactly the same questions I did when AMD first briefed us on this announcement. Here is a summary of the questions I asked, and my interpretations of the responses.

Why only Ryzen 7, not Ryzen 5/Ryzen 9? Because this is a new project for AMD, they want to find out how a processor like this will be welcomed into the market. A lot of users (myself included) expected AMD to go all-in with a big 16-core version, however anything Ryzen 9 requires two chiplets, and adding the extra V-Cache does require an extra cost in silicon and packaging. During a semiconductor shortage, I was told that this is the best way to get it into the hands of many people while also not in the super high-cost bracket. It also means one single unified 96 MB of L3 cache, without having to deal with two chiplets worth which might not be optimized immediately. Future versions of V-Cache on next-generation products may be expanded to other Ryzen members of the family.

The frequencies are lower than the regular 5800X? The cache does add a few watts to the power both in terms of idle and load. Rather than bin a stricter chiplet, the decision was made to reduce the frequency a little, but still allow overclocking. The chip, while listed at 105 W, still has the 142 W package power tracking for motherboards that support it.

Who is this chip for? The focus is on users playing video games over anything else. The extra cache is meant to help with communications with discrete graphics cards, offering additional performance above the regular R7 5800X. Productivity workloads are less likely to be affected, and for those users the regular Ryzen CPUs are expected to be better. The Ryzen 7 5800X3D is designed to be the ‘World’s Fastest Gaming Processor’ (when compared to the 5900X and 12900K).

In terms of those performance metrics, AMD is quoting:

Both systems were running Windows 11.

The critical element here I think is going to be the price. As I’m writing this piece, I can find the following prices:

Even though AMD is promoting the Ryzen 7 5800X3D to be higher performance than the 5900X in gaming, if it goes anywhere north of $500, it might be badly received. At $500, it would be a +$130 add-on from the regular Ryzen 7 5800X. Are users willing to pay almost 30% more for triple the L3 cache for up to 15% more performance in gaming? Or is this just simply a play for the world’s fastest gaming processor, regardless of cost?

Don’t get me wrong here, I think the technology is great. But in order for AMD to keep the same margins, it might be more expensive than people think. I’m looking forward to getting it in hand for review – let us know what sort of tests you want to see.

Perhaps not that surprising given all the information from last year, AMD has confirmed that Zen 4 based Ryzen CPUs coming in 2022 will be built on TSMC’s 5nm process (we assume N5), will be built on the AM5 socket, and feature DDR5 as well as PCIe 5.0. What we get new out of this disclosure are images of the new socket, and a render of the CPU form factor.

With AM5, AMD is going to move to a Land Grid Array (LGA) style of processor, similar to Intel, eliminating the Pin Grid Array (PGA) that has been used on the current Ryzen desktop processors. AMD is no stranger to LGA, given that its EPYC enterprise processors and Threadripper processors both use it. The new AM5 socket is a 1718 pin design, with the pins in two orientations: 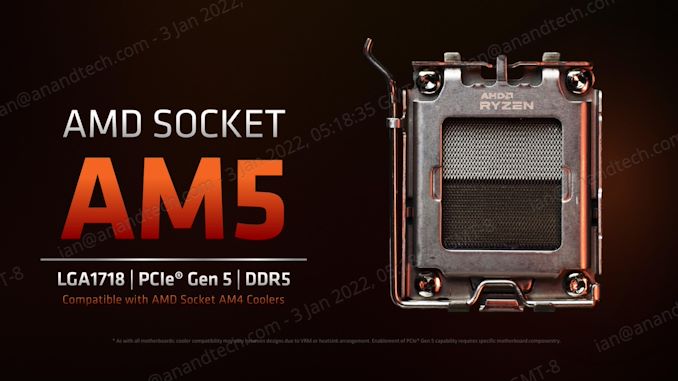 If this sort of socket looks familiar to any of you, it’s because it appears to be a denser version of AMD’s old socket F back in 2006-2010. While that old socket at 1207 pins for Opteron enterprise processors, this one has 1718, so you’ll see us refer to it as LGA1718. Compared to Intel’s 12th Gen Core processors that use an LGA1700 socket, both the major platforms are around the same number of pins.

It is worth noting that this sort of socket, like the old Socket F, means that the bottom of the Zen 4 processors will be nothing but contact pads. The use of an LGA socket means the pin density is defined at the socket level, rather than on the processor, and it’s easier to design a socket with a higher pin density. But the pin-only rear means that some of the power circuitry for the chip will be both in-package and on the top, which is handy given that AMD is also showcasing what the CPU will look like. 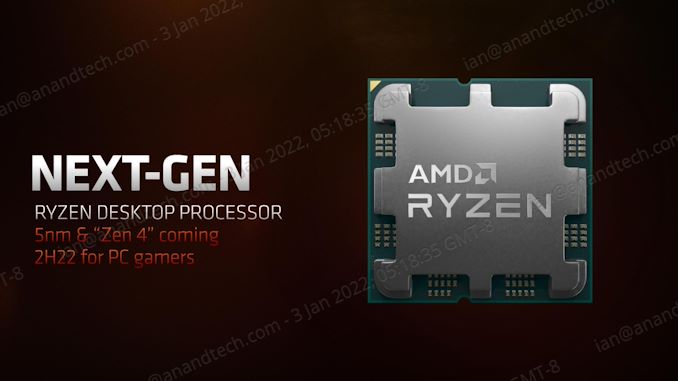 We’ve got another square-like CPU package, however to accommodate some of that power delivery the heatspreader has this sort of octopus arm design to it. The heatspreader is not rotationally symmetric, with the top/bottom (as shown) central arms being smaller than the left/right central arms. The processor also has two notches, one at the top and one at the bottom, just left of center to make sure that the processors are entered in the right way. There’s also that yellow arrow on the top left corner to help guide the user.

On top of showcasing the CPU and the LGA1718 socket, AMD is confirming that the AM5 platform will support AM4 coolers. This means we should expect the mounting holes for AM5 to be the same, or at least the platform to accept both old and new.

Next-Gen Ryzen, featuring Zen 4 cores, 5nm manufacturing, and the new AM5 socket, is coming to market in the second half (2H) of 2022. Core counts and everything else will come later – I suspect we’ll get a deep dive into the architecture sometime around August, at the Hot Chips industry event, or at a special AMD event around that time.