The level of competition in the desktop CPU market has rarely been as intensive as it has been over the last couple of years. When AMD brought its Ryzen processors to market, it forced Intel to reply, and both have consistently battled in multiple areas, including core count, IPC performance, frequency, and ultimate performance. The constant race to improve products, stay ahead of the competition, and meet customers' changing needs has also sent the two companies off of the beaten paths at times, developing even wilder technologies in search of that competitive edge.

In the case of AMD, one such development effort has culminated with 3D V-Cache packaging technology, which stacks a layer of L3 cache on top of the existing CCD's L3 cache. Owing to the fact that while additional cache is beneficial to performance, large quantities of SRAM are, well, large, AMD has been working on how to place more L3 cache on a CPU chiplet without blowing out the die size altogether. The end result of that has been the stacked V-Cache technology, which allows the additional cache to be separately fabbed and then carefully placed on top of a chip to be used as part of a processor.

For the consumer market, AMD's first V-Cache equipped product is the Ryzen 7 5800X3D. Pitched as the fastest gaming processor on the market today, AMD's unique chip offers eight cores/sixteen threads of processing power, and a whopping 96 MB of L3 cache onboard. Essentially building on top of the already established Ryzen 7 5800X processor, the aim from AMD is that the additional L3 cache on the 5800X3D will take gaming performance to the next level – all for around $100 more than the 5800X.

With AMD's new gaming chip in hand, we've put the Ryzen 7 5800X3D through CPU suite and gaming tests to see if it is as good as AMD claims it is.

To outline the framework of the 3D V-Cache, AMD is using a direct copper-to-copper bonding process, with the additional layer of 64 MB L3 cache stacked on top of the existing 32 MB L3 cache on the die. AMD claims this increases gaming performance by 15% on average when comparing the Ryzen 9 5900X (12c/16t) to a 12-core 3D chiplet prototype chip. Whether AMD's claim is based solely on the 12-core design or if this level of performance increase is linear when using fewer cores is hard to determine. 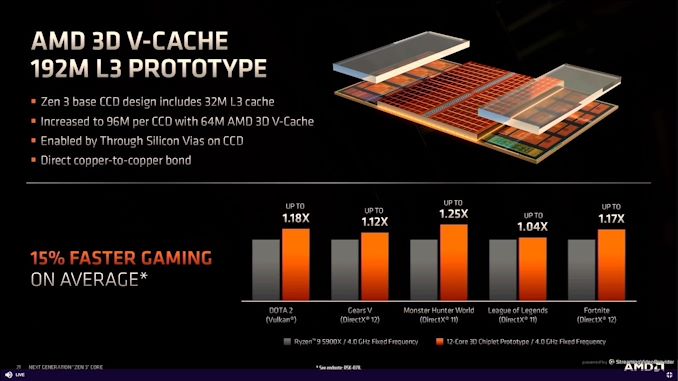 It is clear that 3D V-Cache and its innovative bonding technique, which fuses additional L3 cache on top of existing L3 cache, is an interesting way to deliver solid performance gains, given how crucial L3 cache levels can be for specific game titles. AMD also claims that the large levels of L3 cache improve performance in multi-threaded workloads such as video encoding.

The design of the Vertical (V) Cache is based on the same TSMC 7 nm manufacturing process as the CCD, with a thinning process that is part of TSMC's technologies designed to negate any thermal complications that would arise. Bridging the gap between the 32 MB of on-die L3 cache and the vertically stacked 64 MB of L3 Cache is a base of structural silicon, with the direct copper to copper bonding and connected by silicon VIAs and TSVs.

As the 3D V-Cache is primarily designed to improve performance in game titles, the new chip isn't too far from the Ryzen 7 5800X in regards to raw compute throughput. There will be a slight advantage to the Ryzen 7 5800X and Ryzen 9 5900X in this area with higher core frequencies on both models. Still, as I've previously mentioned, the real bread and butter will be in gaming performance or at least games that will benefit and utilize the extra levels of L3 cache.

AMD Ryzen 7 5800X3D: Overclocking Support for Memory, But not the Core

Although the Ryzen 7 5800X3D supports memory overclocking and allows users to overclock the Infinity Fabric interconnect to supplement this, AMD has disabled core overclocking, which makes it incompatible with AMD's Precision Boost Overclocking feature. This has disappointed a lot of users, but it is a trade-off associated with the 3D V-Cache.

Specifically, the limitations in overclocking come down to voltage limitations ( 1.35 V VCore) through the use of its packaging technology. The dense V-cache dies, it would seem, can't handle extra juice as well as the L3 cache already built into the Zen 3 chiplets.

As a result, in lieu of CPU overclocking, the biggest thing a user can do to influence higher performance with the Ryzen 7 5800X3D is to use faster DDR4 memory with lower latencies, such as a good DDR4-3600 kit. These settings are also the known sweet spot for AMD's Infinity Fabric Interconnect as set out by AMD.

Looking at the state of the desktop processor market as it is now, and by the end of the year, things look promising for users with plenty of choices available. The primary battle right now in gaming performance comes down to AMD's Ryzen 7 5800X3D ($450) and Intel's 12th Gen Core series options, with the Core i9-12900K leading the charge for team Intel.

Perhaps the most interesting debate is when it comes to buying a new processor, as both the current generational offerings from both AMD and Intel offer superb gaming performance on the whole. It's tough to select a mainstream desktop processor that doesn't work well with most graphics cards, and outside pairing up a flagship chip with a flagship video card, it will most likely come down to performance in compute, productivity, and content creation applications. We know that AMD is releasing its latest Zen 4 core later on this year, and we have come to expect advancements and progression in IPC performance.

The AMD Ryzen 7 5800X3D with its 3D V-Cache is new and exciting, and specifically for gaming performance, the battle for the title of 'fastest gaming processor' is ever-changing. Based on the existing AM4 platform, AMD has given users a leading-edge design in a familiar platform, but the biggest challenge will be in making true of AMD's claims, and that's what we aim to do in this review.

Finally, regardless of how the 5800X3D does today, AMD's stacked V-cache technology is not a one-and-done offering. AMD recently announced there will be a Zen 4 variation with 3D V-Cache at some point during the cycle, as well as announcing the same for Zen 5, which is expected in 2024.

For our testing, we are using the following:

For comparison, all other chips were run as tests listed in our benchmark database, Bench, on Windows 10 and 11 (for the more recent processors).