I'm quietly expanding our SSD test suite. I haven't made the results public but you'll see them in the coming months appear in articles and in Bench. One of my tests happens to be a power consumption test where I measure how much power the drive itself requires during a few scenarios. The results with the SandForce SSDs in particular were fascinating enough for me to unveil some of these numbers a bit earlier than I'd originally planned.

In an SSD you have two main consumers of power: the controller, any external DRAM and the NAND. Now as long as you're not bound by the speed of the controller, the biggest consumer of power should be the NAND itself. Now here's where things get interesting. SandForce's DuraWrite technology should mean that there's far less writing to NAND going on in the Corsair Force drive compared to more conventional SSDs. Unless the controller consumes an absurd amount of power, we should see this reflected in the power numbers.

Note that I am not running with Device Initiated Power Management enabled, which is disabled by default in desktop installations of Windows. Power consumption in a notebook will be lower on drives that support it but I'll save that for another article. 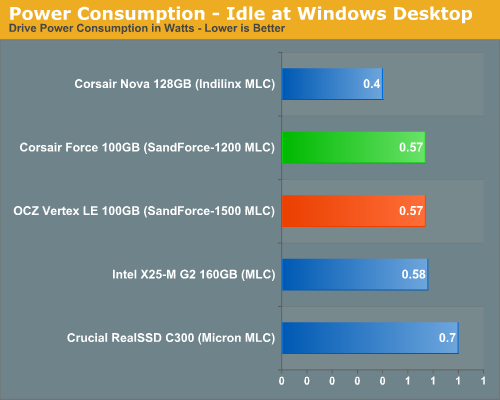 At idle the two SF drives and Intel's X25-M G2 consume roughly the same power. Crucial's C300 is a bit more power hungry while the Indilinx based Nova is noticeably lower. 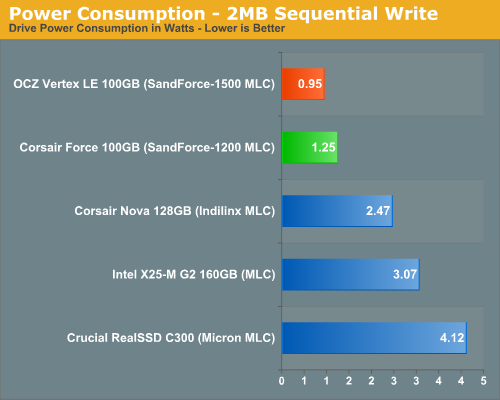 The highest power draw scenario is a sequential write test. The NAND is being written to as quickly as possible and thus power consumption is at its highest. Here we have proven our hypothesis. The SandForce drives are writing less than the competition and thus their power consumption is less than half of the Intel and Crucial drives. Based on the power numbers alone I'd say that SandForce's compression is working extremely well in this test possibly only writing about half as much data to the NAND itself. In practice this means the controller has less to track, the NAND has a longer lifespan and performance is very competitive. 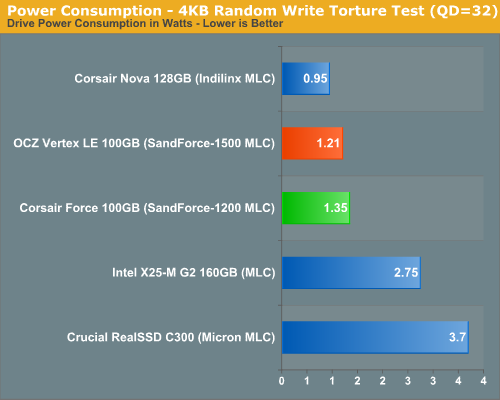 In our random write test, the power gap between the SF and Intel drives narrows but not tremendously. The Indilinx drive actually beats out the SF offerings but I have a feeling that's because we're actually more controller bound here and the data just isn't getting out to NAND.

Another curious observation is the fact that the SF-1200 based Corsair Force actually draws more power than OCZ's Vertex LE. It's not noticeable in real world desktop use, but it's odd. I wonder if the SF-1200s are really just higher yielding/lower binned SF-1500s? Perhaps they draw more power as a result?