The ASRock Vision 3D HTPC package is similar in size to the Core 100 package.

Apart from the main unit, the package also bundles the following:


While the Core 100 and ION 330 shared a similar industrial design, ASRock realized that a high end HTPC needed a shift in appearance. It now brings a Mac Mini look, though the dimensions are still the same as that of the Core 100 and ION 330. The edges are no longer abrupt, and the slimline BD drive has been replaced by a slot loading one. These are exactly the points with which we found issues in the Core 100 review. Of course, people who are concerned with the aesthetics may object to the large number of ports and imprints on the front side of the unit. In a future design, ASRock may probably shift the imprints to the top panel and hide the front ports with a full width hinged door of sorts.

Like the Core 100, the front panel has two audio jacks and two USB ports. In addition, there is also a SD card reader. However, unlike the Core 100, there are no ventilation slots in the front panel. The IR receiver is also visible. Also, the sides of the chassis are not used as antennae for the Wi-Fi (there are two metal plates inside the chassis at the rear end for this purpose).

Moving to the rear of the unit, we have a power adapter input, GbE port, eSATA port and audio jacks similar to the Core 100. However, the VGA port in the Core 100 is replaced by a dual link DVI port in the Vision 3D. The HDMI port is also HDMI 1.4a. There are 5 USB 2.0 ports and 1 USB 3.0 port to wrap up the ports in the rear. Instead of a fan slot, we have air ventilation slots, which are of the type found on the sides of a notebook. There is also a provision for a Kensington lock and a push-button mechanism to lift off the top panel.

An interesting deviation from the Core 100 exterior design is the underside of the unit. While the Core 100 was plain and needed an anti-slip pad for stability, the Vision 3D is raised with rubber bushes, and also has ventilation slots three sides, as can be seen in the picture below. 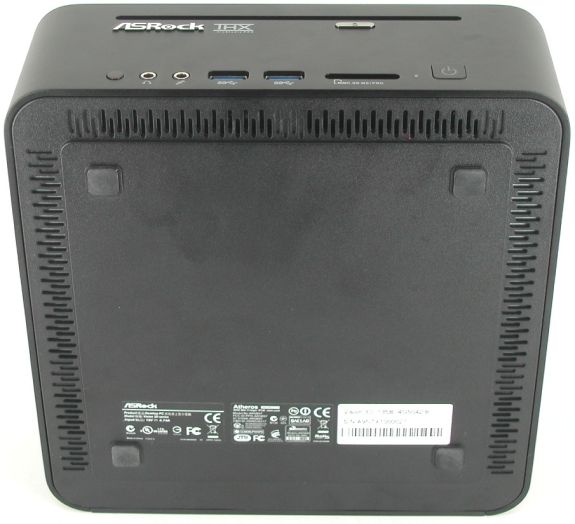 Just like a notebook, this unit also supports simultaneous display on two monitors. Testing was done mostly with the HDMI output connected to a Toshiba REGZA 37" 1080p TV through an Onkyo TX-SR 606, and the DVI port connected to a old Dell monitor running at 1280x1024. The Vision 3D ships with no OS installed. For the purpose of this review, we loaded up a copy of Windows 7 Ultimate x64. It is also possible to install Ubuntu or any other Linux distribution and still be able to take advantage of most of the HTPC functions of the system. Our analysis in the rest of the article, however, is completely from the Windows 7 standpoint.

We will conclude this section with a table to summarize the data and A/V connectivity options for the Vision 3D HTPC.