In and Around the SilverStone Raven RV03

I may be a glutton for punishment at this point, but for me, half the fun of a SilverStone enclosure is figuring out how it comes together. There's always a logic to it, but SilverStone's designs often deviate wildly from the norm and so assembly is oftentimes just as unusual. Before getting into that, though, it's worth addressing the RV03's exterior and unfortunately I think they've taken a step back with this model.

The gold strips that run up the front and across the top are removable, and that's good because they're an accent that cheapens the look of the RV03. Taken on its own this iteration's face is a little more subdued than most gaming enclosures, but compared to the RV02 it's gaudy. The RV02's 5.25" bay covers didn't have the same V-shaped accents the RV03's have (or the colored trim for that matter), and the top of the enclosure was sleeker.

There's a little bit of schizophrenia in the placement of the fan controls and USB 3.0 ports as well; the USB 3.0 ports and audio jacks are covered by a door while the fan controls are entrenched in a metal plate in the open gap between the door and snap-on cover that shields the expansion slots and I/O cluster. I can't help but feel like all of these should've been hidden under the door. 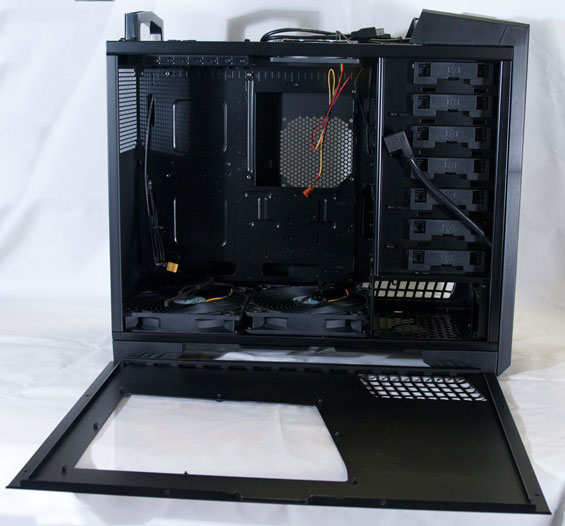 When you do pop the RV03 open, you'll find an interior that seems a lot busier than its predecessor (not to mention most other cases), and that's due to the modularity of the design. SilverStone is pretty big on customization with their enclosures and the RV03 is a doozy that way. Cable routing should be fairly simple given the spacious motherboard tray and routing holes surrounding it, and SilverStone included two drive bay adapters for the copious 5.25" bays in front (seven in all) that allow you to trade three 5.25" bays for three 3.25" bays and additional 120mm fan mounts.

Beneath the column of 5.25" bays is the power supply mount with a cable that routes in from the plug on the bottom of the case. Users of larger PSUs beware: this bay supports 180mm of depth max. There are grilles on both side panels around this bay to improve airflow and cable clearance, but this bay is really designed for PSUs with bottom intakes.

Next to the motherboard tray at the "rear" of the case is yet another 120mm fan mount that, if used, will block off the eighth expansion slot. Finally, there's a 120mm exhaust fan at the top of the case, where one would usually be in relation to a motherboard. Well, not finally, we're not quite done yet. 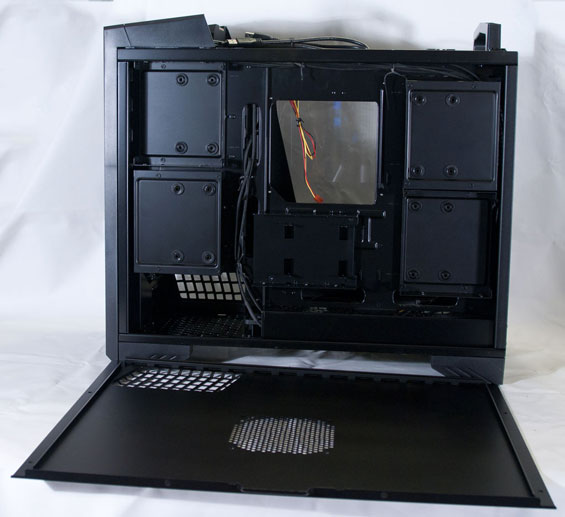 Pop over to the other side and you'll see not only the opening in the motherboard tray for aftermarket cooling ([insert generic jab at Intel's HSF mounting mechanism here]), but four 3.5" drive mounts and a fifth mount able to hold a pair of 2.5" drives. That fifth mount is expressly for SSDs, as odds are good two stacked mechanical drives would overheat if used there. Keeping the drives behind the motherboard tray is an interesting choice since it helps minimize cabling around the motherboard itself, but there's virtually no ventilation back here. SilverStone includes a 120mm fan mount in the side panel that will blow directly onto the back of the processor socket and hopefully spill some of that air to the surrounding drives, but I'd be concerned about heat nonetheless. Mechanical hard drives are specced to tolerate between 50C and 60C maximum, but remember they're mechanical: do you really want to push it?