In and Around the Thermaltake Level 10 GT

Starting this review I find myself experiencing the same issue I had when I started working on the Thermaltake Level 10 GT to begin with: where the hell do you start? But appearances can be deceiving, and once we break it down into what it really is, the whole enclosure becomes a lot easier to grok. What you're going to find is that the Level 10 GT isn't a radically redesigned ATX enclosure so much as just an ATX enclosure with tessellation turned on. 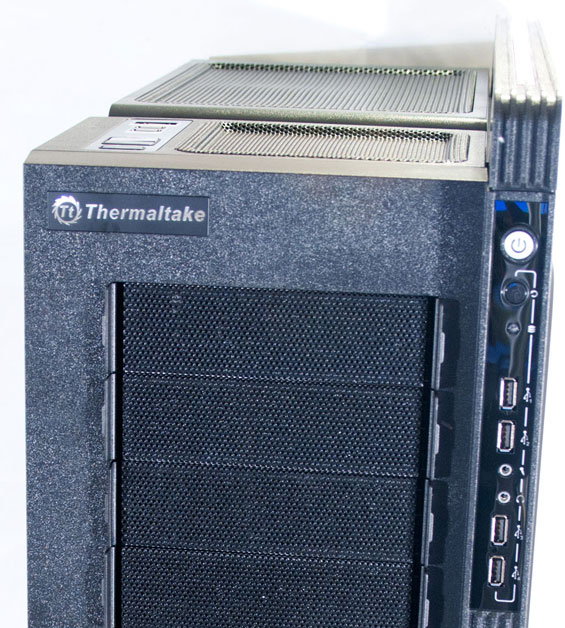 The front of the case sports four 5.25" external bays along with a single 3.5" external bay for either your archaic floppy disk drive or more likely your card reader. Given the way controls are beginning to migrate to the top of cases (a trend I'm actually a fan of), one day I'd like to see a 3.5" bay mounted vertically so the card slots would be at the top next to everything else. The Level 10 GT divides buttons and controls across the front stripe and the top of the enclosure in a way that seems like a strange compromise: the fan control, USB 3.0 ports, and eSATA port are all at the top of the case, while the audio jacks, four USB 2.0 ports, and power and reset buttons are all along the bar on the front. It's a strange orientation decision, only made stranger when you consider that the "show off" side of the Level 10 GT is on the left while these ports are on the right. Depending on where you put your desk and computer, something's going to be awkward.

On any given case, the left side is where the magic happens, and that's doubly true on the Level 10 GT. Its best and brightest user-friendly features are here, with a button that opens the hinged (and removable) side panel, a lever for directing airflow from the side intake, the window, and the five hot-swappable drive bays. The drive bays and side panel are all locked into place on shipment, and you'll need to use one of the keys (which ship attached to the back) to unlock them. There's also a rubber stopper next to the 5.25" bays that can be removed to add a removable headphone rack to the Level 10 GT, a nice convenience feature.

When you get to the back of the Level 10 GT it's business as usual, with a bottom-mounted power supply bay, eight expansion slots, and three rubber-lined grommets for water-cooling tubing. 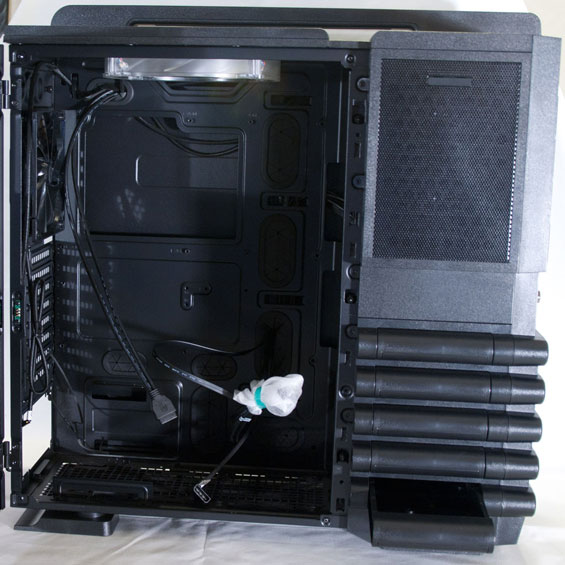 Opening up the Level 10 GT reveals what I honestly consider the major flaw of the design: it's not actually that easy to work with and it's out of the norm in ways that may not be necessary. The 5.25" drive bays aren't truly cordoned off internally like the exterior of the enclosure would have you believe, but they're basically inaccessible from the left side. Likewise, you're not going to be replacing the front 200mm intake fan any time soon, or really any of the fans except maybe the rear fan. The cabling is wrapped up within the case, and the front fan is borderline inaccessible. 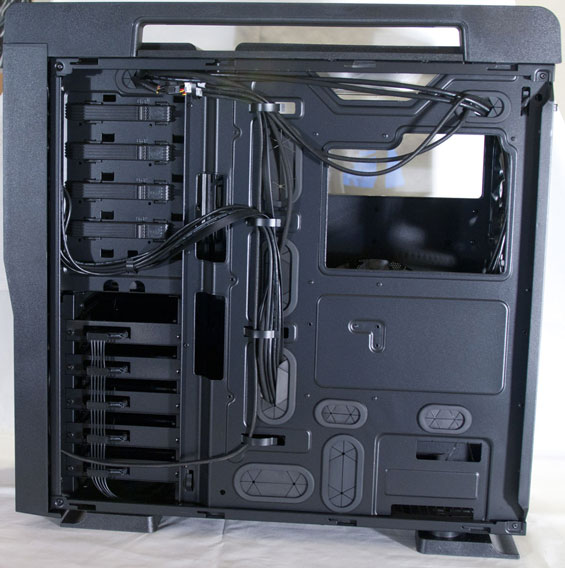 When you get around to behind the motherboard tray, you'll see a cutout for heatsink fan mounts, and all the hotswap drive bays are pre-cabled...sort of. This part is really confusing and was one of my major gripes when I reviewed the CyberPowerPC unit. Thermaltake has a power cable connected to all the bays, but leaves it to the end user to connect the SATA ports, and as a result of the SATA data cable spec's fatal flaw (loose connections), one of the drives didn't register on boot. When In-Win's $100 BUC integrates both the power and data leads and Thermaltake's case costing more than twice as much doesn't, I take issue. And given that it will take some force to replace the back panel (as it does with most cases), I worry that these cables will get knocked loose if they're not properly routed and affixed.

This is also the only side you can secure the 5.25" and 3.5" external bays on, which means they get to float free on the other side. There's a toolless clamp for the 5.25" drives and you can add an additional screw to secure them, but that doesn't make up for the lack of an easy way to secure the drives on both sides. As a result, our test optical drive felt pretty loose.