In and Around the SilverStone Fortress FT02

I'm not going to lie, I had high hopes for the FT02. Cursory experience with a boutique build utilizing the enclosure was, while backbreaking, ultimately pleasant. A healthy number of you hold it in high esteem, and frankly, it's just nice to look at a case that's understated. The Raven RV03 seemed gaudy in places, but it's also about as out there as SilverStone's designs seem to get in terms of aesthetics.

So what stands out about the FT02 from the moment you unwrap it (besides its staggering 33.1-pound weight) is how sleek and minimalistic it really is. This is the polar opposite of gaudy gaming-oriented enclosures: the design is basically a black aluminum band wrapped around the front, top, back, and bottom of the case, with a steel internal body and side panels. The FT02's side panels are both padded with foam internally, and the case is available with or without a side window (our review unit eschews the window.)

Of course it's SilverStone, so the design is going to be anything but normal, and the FT02 fits their mold by utilizing the 90-degree rotated motherboard design pioneered by their Raven series of cases. The aluminum unibody band produces a healthy gap between the bottom of the case and the floor, creating a space for the three 180mm intake fans in the bottom to easily bring in cool air. The top of the enclosure is where the I/O shield and expansion slots are, along with a single 120mm exhaust fan, and this area is covered by a large mesh panel that snaps on and off with a little force. By removing this panel, you'll see the two side panels are held on by two top-mounted thumbscrews each. 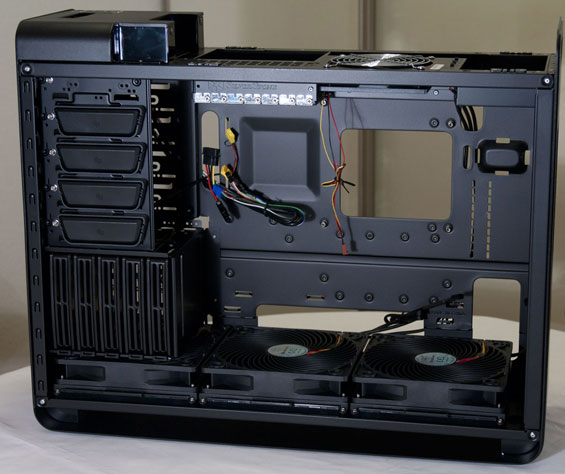 Once we're inside the case, we can see where all of SilverStone's engineers really spent their time. The motherboard tray is indeed rotated in such a way that two of the three bottom intake fans blow directly into the video card and processor heatsink. The net result is an unobstructed path of air that barrels directly through our hottest components. What struck me most about the FT02 was how much cleaner its internal design was compared to the Raven RV03; with a larger chassis and more breathing room, the FT02's insides are more simplified and orderly.

To the left are the five 5.25" external bays, and below them are five drive cages for 2.5" or 3.5" drives, mounted vertically to allow the third 180mm fan to blow straight up through them. The mounting seems a little bit tight, but should be adequate for keeping the drives cool. What's weird is that only one of the 3.5" drive bays features a SATA backplane for hotswapping (made odder by the two step process of getting into the case to begin with); there are places to mount additional backplanes for the other four drive cages, and once again I'm sure SilverStone would love to sell you those separately. Weirder still, the backplane uses a molex connector instead of SATA for power.

There are plenty of places to route cables behind the motherboard tray, but it's here that our SilverStone rep warned us that the FT02 may not be with the times, citing a lack of space behind the tray compared to other, more modern cases. It does appear a bit cramped, but we'll see when we get to assembly.

Initial impressions were pretty positive, and if anything the FT02 makes the RV03 look like a massive step back for the company. The whole fit and finish of the FT02 is attractive, and assembly should be much cleaner if still fairly involved compared to more standard ATX case designs.