So far we've tested HP's TouchSmart 610 all-in-one and Dell's Inspiron One all-in-one, and in both cases we've found things to like along with aspects that left us wanting. Today we have on hand Toshiba's DX735 in its least expensive configuration. Starting at under a grand, the DX735 at least superficially suggests a design that's more focused, more streamlined, and less schizophrenic than the competition. Did Toshiba do right where the others stumbled, or is the DX735 just another case of too many compromises? 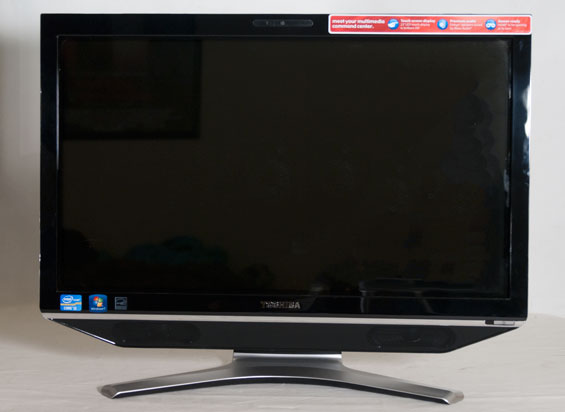 A Toshiba computer meant to be used solely on the desktop seems like a rare thing, but once you take a look at the specifications you'll see they went in a completely different direction from HP and Dell. While HP and Dell paired desktop processors with underpowered discrete notebook graphics, Toshiba cut a lot of the fat and just went for pure notebook hardware (excepting the hard drive). Here's what we received for review.

This is going to sound strange after my having taken Dell's Inspiron One to task for using a mediocre, halfway point of a processor, but I actually like the Intel Core i5-2430M that Toshiba employs in the base DX735 model which we have on hand. Where the other manufacturers are experimenting with mixed results, from the get-go you can tell Toshiba has basically grafted a notebook on to the back of a 23" touchscreen, and that's not necessarily a bad thing.

The dual-core i5-2430M has two cores with Hyper-Threading clocked at 2.4GHz, able to jump to 2.7GHz on both or 3GHz on one. That's not overwhelmingly fast and it's certainly no quad-core replacement, but the decent dual-core processor coupled with a lack of dedicated graphics hardware (or even a dedicated graphics option) makes the DX735's target market clear: this is an internet appliance. Users who want a little more oomph can spend up $100 to get a model that sports a quad-core i7-2670QM that should be more or less comparable in performance to the i5-2400S in Dell's all-in-one, but at a substantially lower wattage.

The Intel HD 3000 integrated graphics are standard across the line and are adequate for the purposes of this all-in-one, while the default 4GB RAM is a perfectly reasonable starting point. I do quibble a bit with Toshiba only offering up to 6GB on their "top end" model; RAM is cheap enough that 8GB should be easily doable.

Where Toshiba wisely diverges from notebook hardware in the DX735 is the use of a full-size hard drive. While it may add heat and weight to the system, Toshiba was frugal enough with their thermal budget that they're able to employ the 1TB Seagate Barracuda 7200.12. The drive is reasonably fast (for a hard drive) while being a good citizen, and it runs 10C cooler than Dell's drive does.

Finally, where Toshiba kills the competition is in offering USB 3.0 connectivity. While overall connectivity is pretty basic, having two USB 3.0 ports for high speed data transfer is a godsend. It's still downright perplexing why the other, more expensive models from the other vendors don't offer USB 3.0, but at least it's here.