We discussed the availability of AMD branded memory modules earlier this month, but today AMD is officially unveiling information on their memory platform. There are a few major questions many will have: why is AMD entering the memory market at all, and what do they hope to offer that we can’t already get from other vendors? Let’s take those in turns.

The reason for AMD’s entry into the memory market comes from two areas. First, AMD’s APUs are now shipping in large volumes and can definitely benefit from higher bandwidth memory modules. We’ve already shown the sort of performance scaling you can get from an A8-3850 with higher clocked DRAM, but many people buy A-series APUs as part of a prebuilt system, and right now lots of OEMs are still cutting corners on the RAM and using DDR3-1333. That’s the second aspect of the move: AMD wants to enable a [buzzword alert!] “holistic customer platform experience”, and they may be able to help drive down costs for AMD platforms. A final element AMD mentions is a desire to drive and enable future memory product developments.

The other item to discuss is what AMD offers that we may not already have. Here the distinction between AMD branded memory and other options isn’t quite so clear, but AMD will be doing testing and validation in their labs using AMD platforms. AMD also notes that they will not be using any ETT (Effectively TesTed) or gray market RAM. The latter is used as a term to collectively group hardware that may be less desirable; as an example, Intel unboxed CPUs are “gray market” because they are intended for OEM use but can still end up being sold at retail. Basically, gray market parts would cut out some of the supply channel (in the example just cited, gray box processors typically cut out AMD/Intel and only have a short warranty from the seller). ETT parts on the other hand are a way of cutting costs by skipping branding; the RAM is still tested and is supposed to be high quality, but without branding it’s one small way to reduce costs. Generally speaking, ETT memory is destined for value RAM modules, so basically AMD is saying is that their AMD RAM will start out a step above value RAM. AMD also states that they will take end-to-end ownership of the AMD Memory ecosystem, working with module manufacturers, memory partners, IC partners, distributors, and VARs (value added resellers).

With that out of the way, let’s discuss the specifics of what AMD Memory will be available and the target markets. Here’s a slide from AMD’s presentation summarizing things: 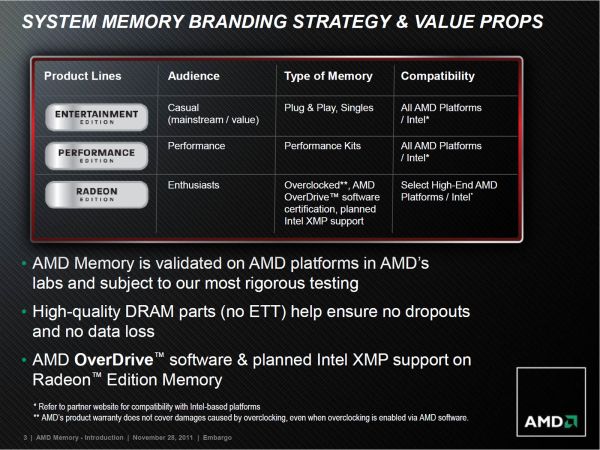 As you would expect from any memory, the AMD RAM will work with both AMD and Intel platforms; the main difference between the tiers will be the speed and packaging. Entertainment Edition memory will target the mainstream/value segment, come in single 2GB and 4GB DIMM packages, and is rated for CL9 operation at DDR3-1333 and/or DDR3-1600; Entertainment Edition memory is already available, starting in October. The Performance Edition memory should start shipping this month, and it will come in 2GB, 4GB, and 8GB capacities (these are presumably two-DIMM kits with 4GB, 8GB, and 16GB total capacities; Bulldozer could potentially use four-DIMM kits). The main difference with Performance Edition memory is that it is rated for CL8 operation at DDR3-1333/1600 speeds. Last is the Radeon Edition memory, which will come in 4GB and 8GB kits and offer DDR3-1866 and up to DDR3-2133 support with CL9 operation (and presumably CL7/8 operation at lower speeds). The Radeon Edition parts will also have support for overclocking via AMD OverDrive software; availability is expected in Jan/Feb 2012.

So what does all of this really mean? That’s the difficult part. If all AMD memory supported speeds of at least DDR3-1600, that would be a clear break from the current offerings, but the press release indicates that there will be both DDR3-1333 and DDR3-1600 parts. The upgrade to DDR3-1600 provides a significant performance increase; we linked our Llano A8-3850 article above showing some of our own results, but here are some charts of our testing along with AMD’s results:

AMD shows up to a 20% performance increase in their testing by upgrading from DDR3-1333 to DDR3-1600, while our own results show an average increase in performance of around 14% across seven tested games (with a range of improvement of around 8% to 41%). Should you choose to spring for faster DDR3-1866 memory (or just overclock some decent DDR3-1600 RAM), the average performance increase is around 20% and up to 40% in some cases (or as low as 8% in Civ5). This isn’t too surprising as the AMD Fusion GPUs are significantly faster than competing solutions and the combination of shared memory bandwidth with the rest of the platform along with generally slower memory speeds (compared to dedicated GPUs) is a double-whammy. So why would AMD continue to sell anything less than DDR3-1600? Your guess is as good as mine. 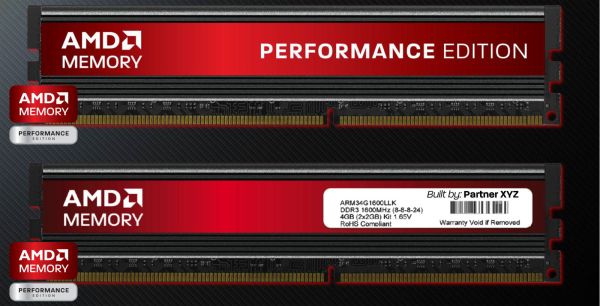 Several of us have chatted about the AMD Memory announcement, and really we’re not quite sure if this is necessary or useful. If it means systems with better quality and higher performance RAM at the same price, that would be a good thing, but the persistence of DDR3-1333 for desktop parts doesn’t jive with that goal. What’s more, RAM prices are already incredibly low, so AMD entering a commodity market doesn’t appear to be a good way to improve the bottom line.

AMD’s first partners for their branded memory initiative are Patriot Memory and VisionTek, with Patriot being a familiar name to memory shoppers and VisionTek known for their graphics products. There’s nothing inherently wrong with AMD branded memory, but unless the price is lower than existing options (e.g. AMD mentions bundles as something we’re likely to see), there’s also not much that it adds to the market. For now, we’ll stick with recommending you buy RAM that will supports at least DDR3-1600 speeds if you’re buying a Llano (or future APU) system; whether that memory is AMD branded or otherwise will likely be far less important than how much the memory costs for the desired level of performance.