NZXT Switch 810: When Too Much Isn't Enough

In and Around the NZXT Switch 810

When you get it out of the box and eyeball it, the NZXT Switch 810 really does come off as a fairly sleek and attractive design. It's a little flashier than most, but it's not over-the-top Stormtrooper-style like the Phantom; the Switch is just distinctive. Our review unit is a two-toned white-on-black unit, but you can also get it in black-on-black if you want something a little less eye-catching. 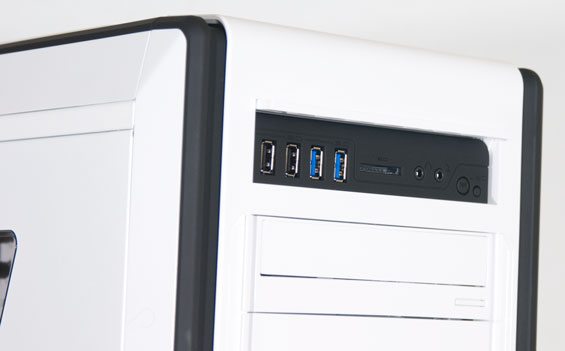 Starting at the front, NZXT includes easily removable drive bay shields (one of which is an optical drive bezel that actually lines up with the drive we use for testing--nice!), a single 3.5" hotswap bay, and at the very top behind a cover, the case's I/O cluster featuring two USB 3.0 ports, two USB 2.0 ports, the standard mic and headphone jacks, the reset button, and two other welcome features: an integrated SD card reader and the button for toggling the rear LEDs on and off. The bottom of the fascia can also be popped off, revealing the two fan mounts.

The top of the Switch 810 includes the removable vent, the power switch, and the HDD activity and power lights, both illuminated with white LEDs. The vent is a nice enough touch similar to what we saw in Rosewill's Thor v2, but on the Switch 810 there's actually ventilation around it that allows the top exhaust fan to still expel air while the vent is closed.

When we look at the back, there are the usual four rubber-lined holes for routing water-cooling hosing (arguably even less important in a case like the Switch 810 that can house up to a combined 980mm worth of radiators internally), nine ventilated expansion slots, and the power supply bay. You'll notice the rear 140mm fan is also adjustable; loosen the screws and you can slide it up and down or even out of the existing notches and move it higher or lower. 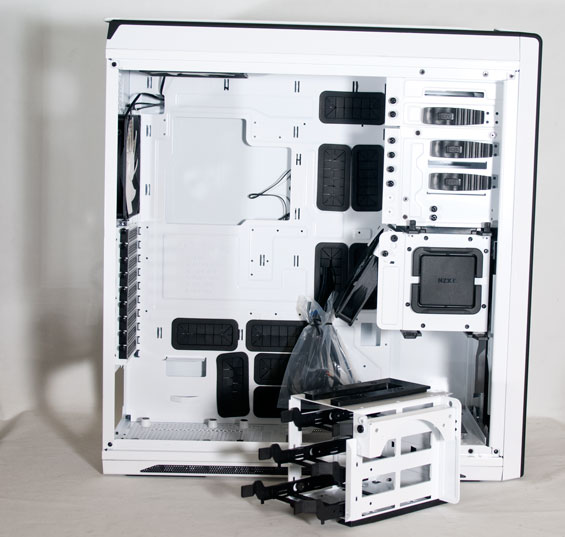 NZXT includes a windowed side panel with the Switch 810 and the window's angle matches up to the angles on the top of the enclosure. The side panels are both held on with three thumbscrews, but they're not as secure as I'd like: the panels hinge outward, but they're easy to rattle in place and though I didn't experience any problems with it in use, I still don't like seeing side panels that loose.

Open the case and you'll find plenty of real estate. The two hard drive cages are both easily removable, and while they're lateral the drive sleds actually slide out behind the motherboard tray instead of above it. You can also see two adjustable fan mounts (one of which is populated) attached to the drive cages and used for directing airflow inside the enclosure. There are plenty of rubber-lined routing holes in the motherboard tray, and the power supply sits on top of a set of rubber pegs. NZXT uses a toolless mount for the open 5.25" drive bays, and the clasps are very sturdy. 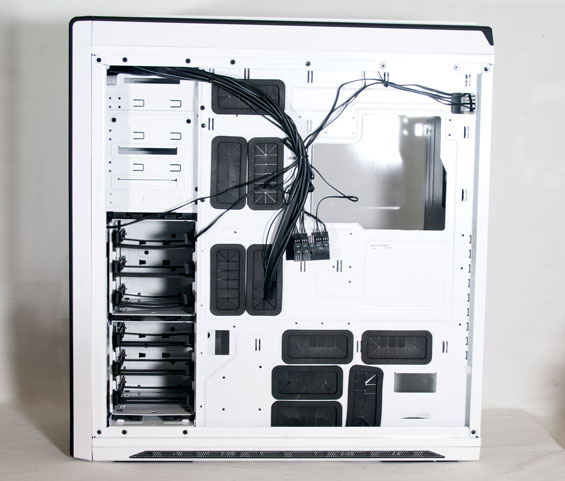 The use of plastic everywhere isn't ideal, but the Switch 810 is definitely sturdier than Rosewill's case. Where customizability is concerned NZXT has definitely made their enclosure as accommodating as possible, but at this point you'll notice an omission that's going to rear its ugly head later: there's no fan controller. There's a set of fan headers behind the motherboard tray, but no actual fan control.