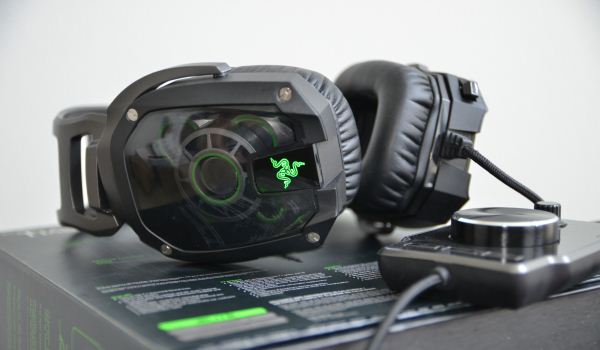 What does it do?

The Tiamat is a desktop headset, with very long cables, a large volume control unit (which features a toggle between headphones and an audio system), and a reliance on USB power. It has five 3.5mm jacks, four for different audio channels and one for mic, along with a USB used exclusively for power. Each circumaural cup has five drivers: one for front, rear, and surround, along with a center channel and a subwoofer in each ear. Razer’s other 7.1 headset, the Megalodon, makes do with two drivers and virtual surround, so this is a significant step up on paper. Compared to other large headsets, the Tiamat appears to have smaller drivers overall with a mix of 30mm (front, center) and 20mm (rear, surround) drivers to complement the 40mm subwoofer drivers. For example, the lower-end Tiamat 2.2 has two 40mm drivers for mid/high range frequencies to go with the two 40mm sub drivers, while Corsair goes with two 50mm drivers and virtual surround in its Vengeance 1500 headset.

Is it any good?

The design and aesthetic of the Tiamat is pretty stunning. Razer has traditionally put a lot of effort into the industrial design and packaging of their products, so this comes as no surprise. The external cover of the circumaural cups is translucent, so you can actually see the individual drivers. It’s awesome to see how the smaller mid/high drivers are dwarfed by the sub, and overall, it’s just a cool aesthetic. The Razer logos on each side light up in green when you plug it in, and the headband on top features matching green stitching. The mic is on the left side, and slides out of the way to stay hidden when you don’t need it. They’re pretty large headphones, to say the least, but they wear comfortably, with padded leatherette ear cups and a headband that fits well.

The audio performance depends on your use cases. In gaming situations (assuming the game supports surround), the Tiamat shines. It’s pretty helpful in placing opponents (especially in racing and FPS games), and the overall experience is pretty stellar. This holds true for well sound-engineered action movies, too. Razer has done a good job optimizing the directionality of the speakers, so you really get a sense of the surround effect. Unfortunately, in music-heavy usage, it leaves a bit to be desired, with sound that’s clearly being made by smaller drivers. This is especially noticeable at the high end, where the sound was pretty thin, maybe even a bit tinny. An audiophile would probably be better served by a mid-priced set of cans like the Sony MDR-V6 or something similar.

Razer has always been a company that has prioritized gaming over any other use case, and the Tiamat is certainly no different. But given the pricepoint, I’d like to see a bit more versatility and better audio quality for music.

Should I buy one?

Regardless of my recommendation here, I’m not sure it’s possible to find the Tiamat in stock anywhere. Razer’s store shows 4-8 weeks for delivery, while Amazon quotes 1-3 months. The Tiamat has garned enough interest that even three months after launch, Razer is having trouble manufacturing enough Tiamat units to meet demand. As with many of Razer’s products, the Tiamat is very premium in terms of quality and design and offers some unique and attractive features. It’s seriously pricey though, and if you listen to a lot of music, you’re probably not going to be thrilled with the audio fidelity. But if you’re really into gaming, this is one of the more desirable headset options out there, and that's just how Razer wants it.