Next up in our test suite are our gaming tests, which we discussed in our 2012 Mobile Benchmark Matrix. We conducted all of the 1366x768 testing with the internal LCD and connected an external 1080p display for the Mainstream and Enthusiast test results. Our Value settings are generally very easy on the V3-571G while the Mainstream settings can sometimes be a bit much and the Enthusiast settings (shown in Mobile Bench)  are typically beyond the capabilities of the GT 640M. One of the disappointing decisions Acer made with this laptop is the choice to go with slightly cheaper DDR3 memory for the GPU; while GDDR5 isn’t as necessary at the native LCD resolution, it certainly would have helped with gaming on an external LCD. Of course, we would have liked both GDDR5 and a better LCD, but we tend to be greedy. 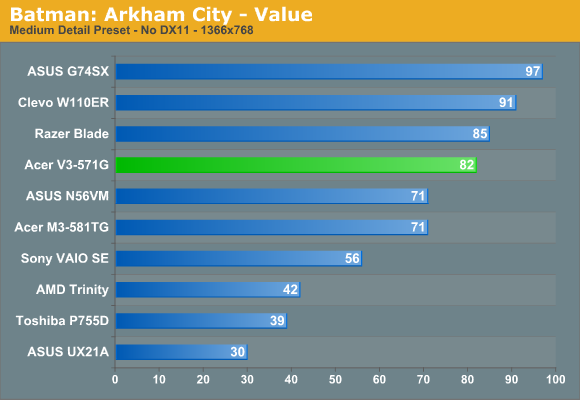 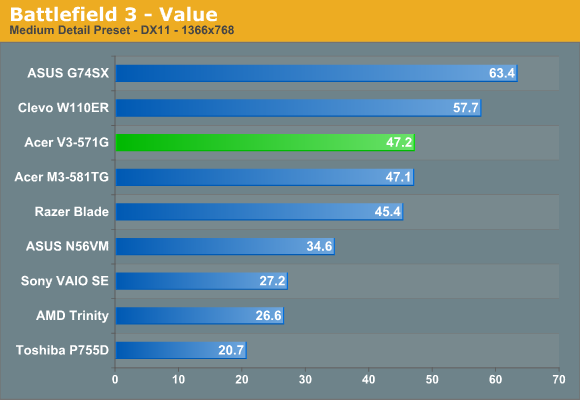 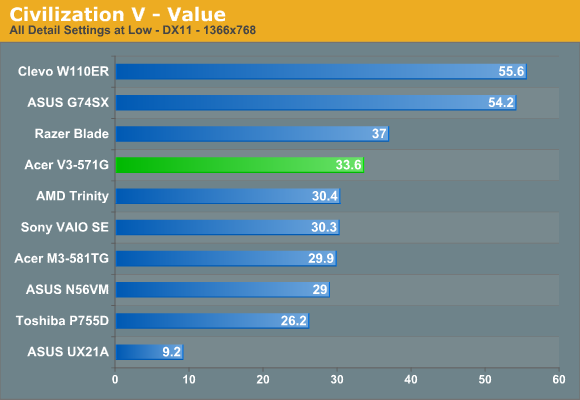 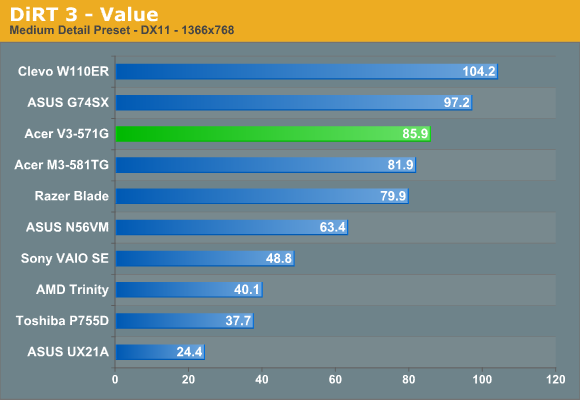 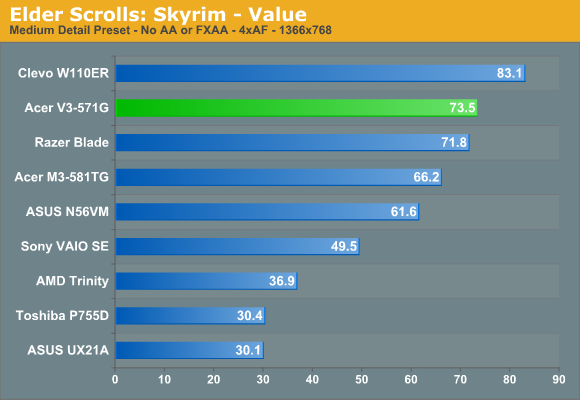 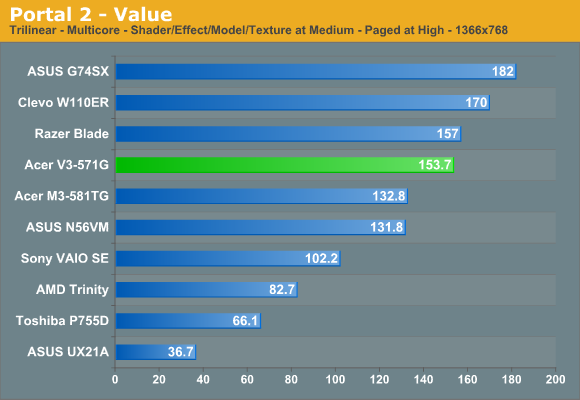 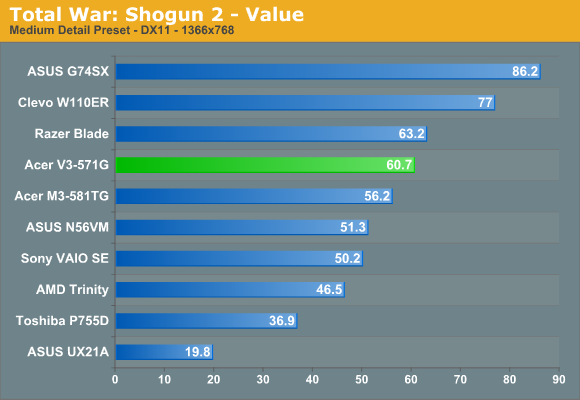 We won’t say too much about our Value settings, other than the V3-571G is more than capable of running all the test games at these settings without difficulty. Civilization V was initially the odd man out, with performance coming in just shy of 30FPS at 28.3; however, the just-released-yesterday 304.79 beta drivers have improved Civ5 performance by around 15%, pushing Civ5 up to 33.4FPS. I still feel it’s possible the current NVIDIA drivers aren’t optimized very well for mobile Kepler, but how much more performance they can eke out with driver updates remains to be seen. The previous generation GT 555M in the Razer Blade is still 10% faster than the GT 640M, and AMD’s A10 Trinity chip is nipping at the heels of what should otherwise be a much faster GPU. The GT 650M in the W110ER also comes in a whopping 65% faster (with a core clock that’s only 18% higher), so something is certainly odd with the current Civ5 results. The V3 breaks 60FPS in nearly all of the other games, Battlefield 3 being the other exception (though at 47FPS it’s certainly fast enough for multiplayer gaming).

Note that in all of these games, the Clevo W110ER with the faster clocked GT 650M (but still with 2GB DDR3) easily outperforms the GT 640M, suggesting that at least for our Value settings memory bandwidth isn’t a bottleneck. The GT 555M GDDR5 on the other hand trades blows with the GT 640M, winning several matchups but falling slightly behind in others. In terms of compute power, the GT 640M should win out by roughly 20%, but the GDDR5 memory gives the GT 555M nearly 40% more bandwidth, with the result being a pretty even fight. Let’s see what happens at our more demanding Mainstream settings. 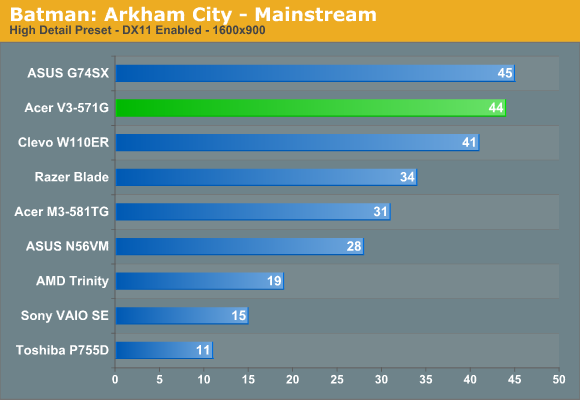 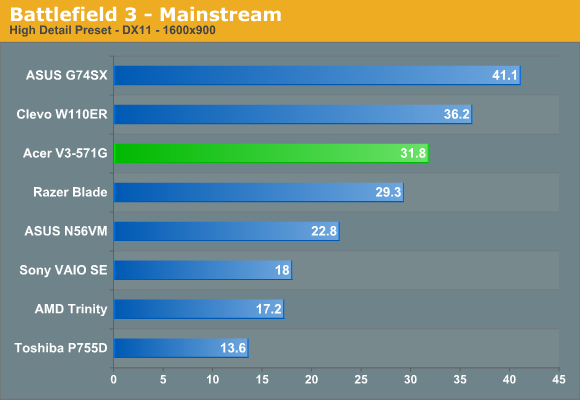 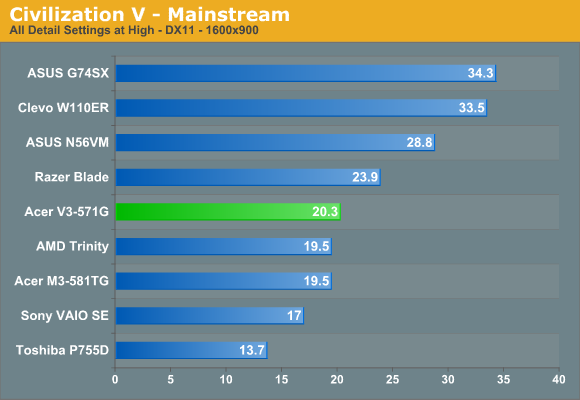 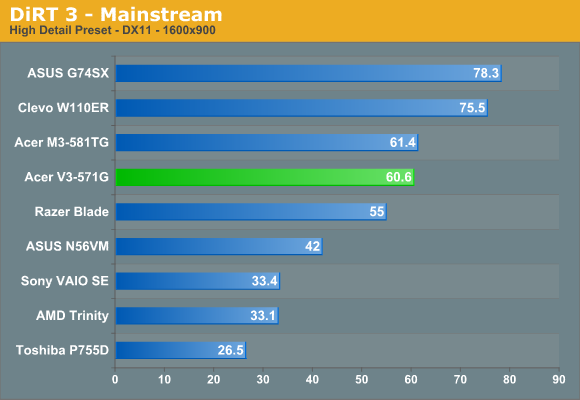 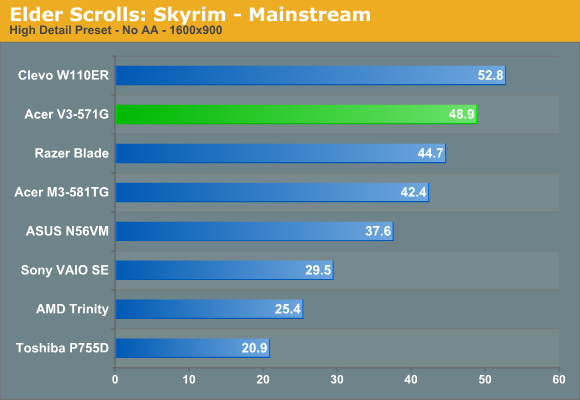 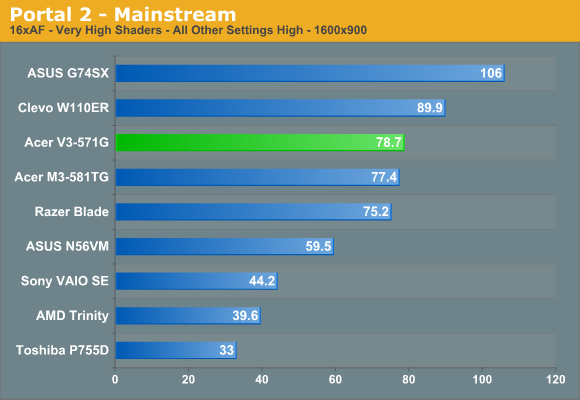 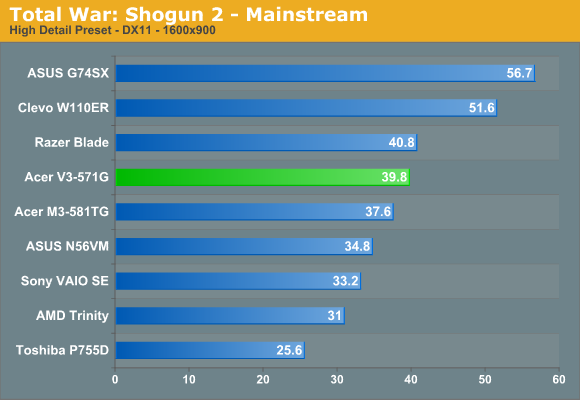 With the increase in detail levels and resolution, performance drops are pretty significant. The V3-571G manages to stay above 30FPS in all of the titles, with the exception of Civilization V, but frame rates are low enough in BF3 that we’d recommend using lower settings for multiplayer. The Razer Blade likewise continues to trade blows with the V3, indicating we’re still pretty balanced between memory and shader requirements. Of course, outside of gaming on an external display, no one would actually be running at our 900p Mainstream or 1080p Enthusiast settings, so we put together another table with our recommended settings and the performance you can expect.

Most of the games in our test suite run fine at close to maximum detail at the LCD’s native resolution. You can read our testing notes from above, and the only games that need lowered settings are BF3 and Civ5 (surprise). I also ran a test of Diablo 3 (Nightmare difficulty, midway through Act 1) and found that even 1080p at maxed out settings (with the newly added “High (Smooth)” shadowing enabled) was playable on an external LCD, with an average frame rate of 38FPS over 30 minutes. During that period, there were only four dips below 20FPS, with frame rates staying above 30FPS 91% of the time and above 25FPS 99.5% of the time. Of course, if you play on the integrated laptop display you won’t have any issues with frame rates whatsoever. [Ed: Battle.net lag on the other hand….]

The short summary of the gaming results is that the V3-571G definitely has sufficient performance for running any modern game, though not always at max quality. If you prefer gaming performance put into perspective, today’s mainstream GT 640M is generally faster than the GTX 285M from a couple years back, and it consumes less than half the power. It’s also a pretty good match up against the Radeon Mobility HD 5850 and GTX 460M—again, while using substantially less power. With GDDR5 memory, the GT 640M would likely outperform both of those cards.