We have taken a look at the Netgear NV+ v2 multiple times in the past. With the launch of RAIDiator 5.3.6, Netgear is keeping up their promise to keep the updates flowing for the ARM-based units. The new firmware brings with it a host of features which Netgear places under the ReadyNAS Cloud umbrella.

According to Gartner’s market research report for network attached / unified storage devices, Netgear leads in the total number of units shipped across all segments of the market (followed by QNAP and Synology). In terms of revenue, Netgear leads in the market for units priced $5K and lower. However, heavyweights like EMC and NetApp take the lead in terms of revenue overall. It is clear that Netgear is a name to be reckoned with in the SMB / SOHO /  home NAS market. The feature to price ratio has kept the NV+ v2 and Duo v2 afloat in the market so far. We had mentioned multiple times that the units don’t have a lot of apps or firmware features even after a year. RAIDiator 5.3.6, available for download today for the NV+ v2 and Duo v2, hopes to address some of the issues. 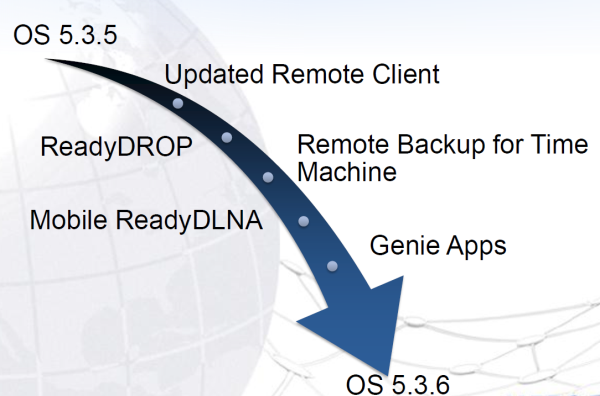 As the name indicates, it is a software application intended to enable remote access to the ReadyNAS unit. In the original review of the NV+ v2, I wasn’t very impressed with the app (when compared with WD’s WD2go solution). The updates to ReadyNAS Remote being rolled out today involve the addition of the ReadyDROP and Remote Backup for Time Machine features.

Almost all NAS vendors have come up with a DropBox-like solution using the unit for ‘unlimited’ storage with real-time synchronization capabilities across multiple clients. At CES, we wrote about Synology’s CloudStation which came with DSM 4.0. Netgear has a similar feature in RAIDiator 5.3.6 called ReadyDROP. Since the data is stored on the ReadyNAS, there is no monthly cost or capacity limits (other than the capacity of the ReadyNAS unit itself).

Netgear claims the use of patented technology from its acquisition of Leaf Networks in the ReadyDROP implementation. A secure VPN tunnel is created for synchronization, but the end user experiences the simplicity of a username and password for access, with no special router setup necessary. Options such as the ability to pause syncing when the connection is slow are also available. The files can also be accessed over the web through the ReadyDROP website.

Features such as versioning and ability to share files and folders with other people are slated to appear in a future update next year.

We covered the ReadyNAS Replicate add-on in detail in our second look at the NV+ v2. With RAIDiator 5.3.6, the Replicate add-on will become free for owners of the Duo v2 and NV+ v2. In order to access the full-featured Replicate license it must be downloaded from within the GUI.

Netgear introduced Genie Apps at the 2012 CES for their router lineup. With RAIDiator 5.3.6, the ReadyNAS NV+ v2 and Duo v2 also start getting these apps. The integrated application list automatically updates when new ones are added and also allows third parties to sell apps and subscriptions. The apps can be launched directly from the GUI.

We are excited to see that Netgear is committed to improving the feature set of the ReadyNAS NV+ v2 and Duo v2 lineup. It will be interesting to see the sort of apps which will make an appearance in the Genie Apps marketplace. Netgear also assured us that these features will be rolled out to the x86 based units in the near future.