Earlier this week we posted a short write-up about Micron’s new DDR3L-RS memory. We didn’t have a lot of technical detail to go on at the time, but Micron offered us a chance to chat with them on the phone and we were able to get more information about DDR3L-RS as well as their other memory products. Memory is something many of us take for granted in our PCs and other computing devices, but there’s a lot more going on in the market than you might expect.

If you need the least expensive memory possible, DDR3 is currently the way to go. On the other hand, if you’re making a mobile device, finding memory that uses less power even if it costs more might be the best option. Naturally, there are plenty of other options that fall somewhere in between those extremes; Micron provided us with the following chart showing where the various memory types fall in terms of price vs. power requirements. 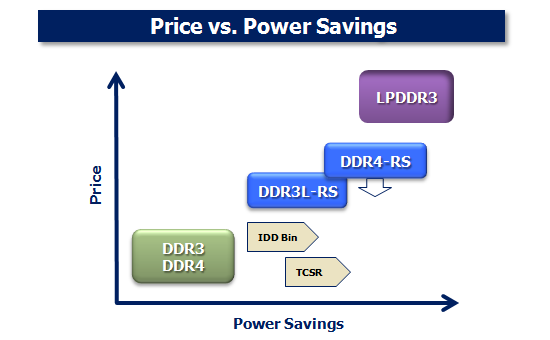 Starting at the top with LPDDR3 and other LPDDR products, their specialized nature is what gives them both their low power usage as well as their higher cost—consider how most tablets and smartphones only ship with 1GB LPDDR or less right now. Chiefly this comes because of the complexity of the devices; for example, the memory might be integrated into an SoC, or placed in a PoP package. The result is that while you can get the best power characteristics out of LPDDR, the volume is much lower as it’s generally not used in high volume markets like laptops and PCs with 8GB or more RAM. We haven’t seen any laptops that use LPDDR so far (at least, not that I’m aware of), but Intel reportedly has LPDDR3 support on their Ultrabook roadmaps, which would allow for improved battery life as well as smaller/thinner designs.

At the other end of the spectrum we have DDR3, a commodity memory where low price is generally the primary consideration. These devices are mass produced so economies of scale along with less difficult targets (e.g. 1.5V and DDR3-1600 speed) allow them to reach lower price points. Right now, for example, you can find a kit of 8GB DDR3-1600 CL9 SO-DIMMs for around $40 (and under $35 for DDR3-1333 and/or CL11).

One step up from DDR3 in terms of power efficiency is DDR3L, which targets 1.35V instead of 1.5V. Power scales linearly with voltage and current (P = V * I), and reducing the voltage typically reduces the current required for the chip as well, resulting in a substantial reduction in power draw. Getting chips that will run at a lower voltage is mainly a matter of binning, along with improvements in process technology, so the costs are very similar to regular DDR3. Sticking with the previous example, the same DDR3-1600 CL9 kits cost about 10% more if you get 1.35V DDR3L. Note that most DDR3L laptop kits will also run fine at 1.5V, but if you want to run at 1.35V you’ll generally need a laptop specifically designed to utilize the lower voltage—Apple’s MacBook Pros for instance use 1.35V CL11 memory.

Straddling the line between LPDDR3 and DDR3L, we have Micron’s new DDR3L-RS memory. The RS suffix stands for “Reduced Standby”, and through a process of binning along with a few extra features, Micron is able to cut standby power use for a system by around 25%. DDR3L-RS is also backwards compatible with the DDR3 standard, so there’s no change necessary at the controller level—all the extra work happens in the memory devices. Micron couldn’t discuss specific prices of their various memory types, but they did suggest that at the component level DDR3L-RS should cost around 20% more than DDR3L. In terms of power efficiency, Micron provided the following information showing their expected power savings: 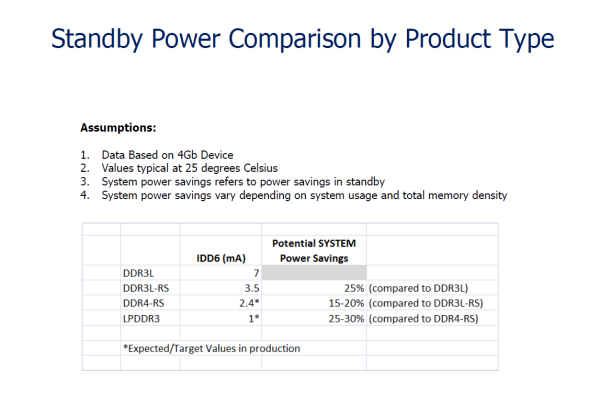 One of Micron’s key features in reducing the amount of power used in standby mode is TCSR: Temperature Controlled Self Refresh. Most systems are specified to run the RAM at up to 85C when active, but in sleep mode the temperatures drop substantially and open the door for some additional power savings. In the case of Micron’s DDR3L-RS, once the temperature hits 45C or less, they can reduce how frequently RAM needs to be refreshed and thereby reduce the power draw. It's also important to remember that DDR3L-RS won't perform any better than DDR3L in active use; its benefits as the name implies are only when the memory/system is in standby.

We should note that while we’re talking about Micron’s specific memory, DDR3L-RS, it is expected that the other major memory manufacturers (e.g. Hynix, Elpida, Samsung, etc.) will have similar RAM technologies, though the specifics of how they save power may vary among the suppliers.

What about future memory technologies like DDR4? Micron also discussed some of their upcoming designs that leverage DDR4 with us, and like the switch from DDR2 to DDR3, the change from DDR3 to DDR4 will necessitate new memory controllers and will not be backwards compatible. One of the biggest changes with DDR4 is that the standard voltage drops from 1.5V (DDR3) down to 1.2V, enabling power savings over even DDR3L. Micron will also have DDR4-RS memory available, and we’ll likely see products start to use that (e.g. some tablets) as soon as late 2012/early 2013. While Intel hasn’t officially made any statements in regards to Haswell’s memory technology, the emphasis on reducing power use would make that an ideal time for Intel to switch from a DDR3 controller to DDR4—we should know more sometime in the coming months.

Wrapping up, obviously there’s no single “silver bullet” memory technology that works best for all markets. Paying a price premium for DDR3L or DDR3L-RS on a desktop just to save a couple watts of power doesn’t really make sense, while on laptops and in particular Ultrabooks the power savings could definitely be worthwhile. Like other DRAM manufacturers, Micron looks to offer a broad selection of DRAM devices for the whole array of options. The end result is that customers can choose based on cost, form factor, power, etc. and find the best balance of features and pricing for their product. Margins on memory products have become razor thin over the years, so anything that can help companies like Micron find a way to improve their bottom line is obviously something they will pursue; currently, the ultrathin computing initiative—tablets, Ultrabooks, sleekbooks, etc.—is really pushing for improvements in memory technology.