In and Around the BitFenix Ghost

Honestly, the detailed examination of the build quality of the BitFenix Ghost is where the case actually seems to fall apart the most under scrutiny. You'll see later on that assembly wasn't an issue, but BitFenix doesn't seem to have done as good a job skirting the line between cheap and inexpensive with the Ghost as they typically have. I don't think it's a poor value, far from it, but when you're accustomed to seeing excellent values from a company it does come as a bit of a shock to see something that feels merely competitive.

BitFenix did away with their usual soft-touch plastic finish, the finish that went such a long way towards making the cases feel like quality, and instead are using a more basic plastic finish for the fascia, door, and top shell. The lines are clean and smooth while still having a touch of distinction, and I'm always fond of the black and gunmetal gray duo. The problem is that the building materials feel thin; sure the door swings open in either direction, but when you see how it's held together (plastic snapped around a plastic peg) you suddenly feel a little more skeptical. I harped on the mechanism Corsair used in the 550D, but even that feels a little more reliable than what BitFenix has going on here. 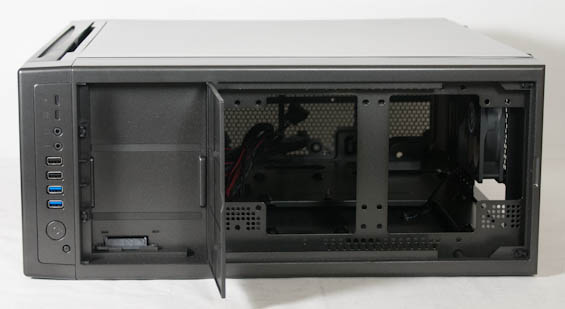 Where I think they did very right was in putting all of the I/O on top of the case so that the door was only really relevant for muffling noise from the dual front intake fans and the optical drive. This is pretty much an ideal setup, and the cubby for the hotswap SATA bay has a hinge that snaps open and shut, keeping those clean lines and surfaces. I don't live in a vacuum, though; some of my peers have commented on the top vent of the Ghost being counterproductive for containing noise, while others don't see it as a problem. I honestly can't say I go either way on it. I don't personally think it contributes substantially to the noise and I do feel it's a net gain, but your mileage may vary.

Opening and closing the Ghost, on the other hand, is kind of an ordeal and was something that really should've been rethought. While the side panels employ thumbscrews, the panels themselves are held on by locking into notches similar to how old, super-cheap cases have. This isn't an ideal way to handle this by any stretch of the imagination, as it does virtually nothing to curtail potential rattling but it does making closing up far more difficult than it has any right to be. A hinged design with some kind of sound-muffling material where the panels make contact with the chassis might have been a better call. 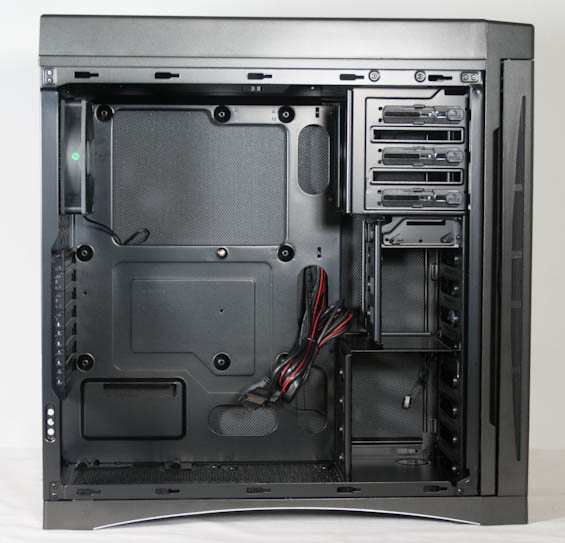 As for the interior of the Ghost, BitFenix got most of it right. In keeping costs down they include only two of their 120mm Spectre fans, one in the front as an intake and one in the back as an exhaust, and the overall number of fan mounts in the Ghost are more likely to result in a negative pressure airflow than a positive one.

Ignoring the minor annoyance of getting inside the case, though, the design is remarkably progressive. While neither drive cage is removable, I'm incredibly pleased to see a smaller 2.5" drive cage above the 3.5" drive cage, and BitFenix includes 2.5" trays. It's ridiculous how long it's taken for a vendor to produce a toolless 2.5" drive mounting design like this. There's also a peg in the center of the motherboard tray for lining up the board, and all of the board mounts are essentially extruded from the tray itself.

While I'm unimpressed with the quality of materials employed in building the Ghost, I also can't really deny that I like the aesthetic, and that I'm pleased with the conveniences that went into the design of the interior. BitFenix isn't breaking any bold new ground with their airflow design, but there's at least some refinement going on here towards making the case easier to build in. I'm also happy to see that they haven't dispensed with the 3.5" external bay, as those are still very useful for card readers.