Plextor Updates The Firmware on M5 Pro: Promises Increased Performance, We Test It

In our Intel SSD DC S3700 review we introduced a new method of characterizing performance: looking at the latency of individual operations over time. The S3700 promised a level of performance consistency that was unmatched in the industry, and as a result needed some additional testing to show that. The reason we don't have consistent IO latency with SSDs is because inevitably all controllers have to do some amount of defragmentation or garbage collection in order to continue operating at high speeds. When and how an SSD decides to run its defrag and cleanup routines directly impacts the user experience. Frequent (borderline aggressive) cleanup generally results in more stable performance, while delaying that can result in higher peak performance at the expense of much lower worst case performance. The graphs below tell us a lot about the architecture of these SSDs and how they handle internal defragmentation.

To generate the data below I took a freshly secure erased SSD and filled it with sequential data. This ensures that all user accessible LBAs have data associated with them. Next I kicked off a 4KB random write workload at a queue depth of 32 using incompressible data. I ran the test for just over half an hour, no where near what we run our steady state tests for but enough to give me a good look at drive behavior once all spare area filled up.

I recorded instantaneous IOPS every second for the duration of the test. I then plotted IOPS vs. time and generated the scatter plots below. Each set of graphs features the same scale. The first two sets use a log scale for easy comparison, while the last set of graphs uses a linear scale that tops out at 40K IOPS for better visualization of differences between drives.

The first set of graphs shows the performance data over the entire 2000 second test period. In these charts you'll notice an early period of very high performance followed by a sharp dropoff. What you're seeing in that case is the drive allocating new blocks from its spare area, then eventually using up all free blocks and having to perform a read-modify-write for all subsequent writes (write amplification goes up, performance goes down). 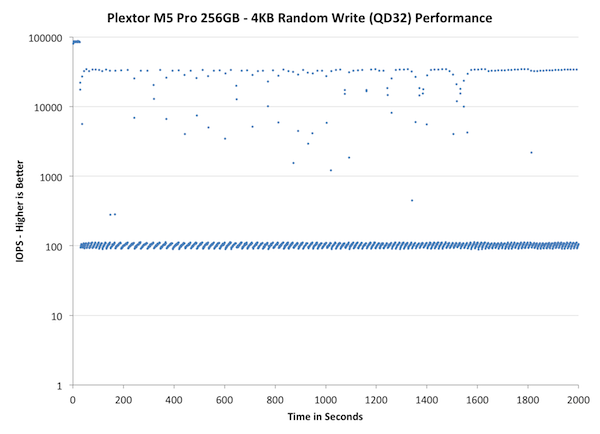 Wow, that's bad. While we haven't run the IO consistency test on all the SSDs we have in our labs, the M5 Pro is definitely the worst one we have tested so far. In less than a minute the M5 Pro's performance drops below 100, which at 4KB transfer size is equal to 0.4MB/s. What makes it worse is that the drops are not sporadic but in fact most of the IOs are in the magnitude of 100 IOPS. There are singular peak transfers that happen at 30-40K IOPS but the drive consistently performs much worse.

Even bigger issue is that over-provisioning the drive more doesn't bring any relief. As we discovered in our performance consistency article, giving the controller more space for OP usually made the performance much more consistent, but unfortunately this doesn't apply to the M5 Pro. It does help a bit as it takes longer for the drive to enter steady-state and there are more IOs happening in the ~40K IOPS range, but the fact is that most IO are still handicapped to 100 IOPS.

The next set of charts look at the steady state (for most drives) portion of the curve. Here we'll get some better visibility into how everyone will perform over the long run. 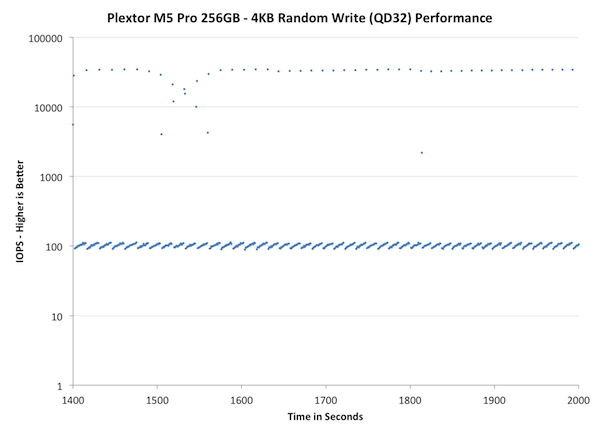 Concentrating on the final part of the test doesn't really bring anything new because as we saw in the first graph already, the M5 Pro reaches steady-state very quickly and the performance stays about the same throughout the test. The peaks are actually high compared to other SSDs but having one IO transfer at 3-5x the speed every now and then won't help if over 90% of the transfers are significantly slower. 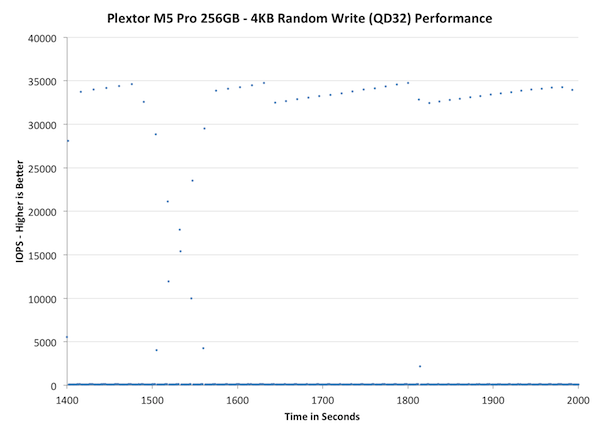