When the concept of a graphical BIOS came into force, motherboard manufacturers had several ways of going about the issue.  The main take on the matter was to skin an AMI or Award BIOS with a company logo, and dress up the options into an easier to read scenario.  Some motherboard manufacturers took this a little further, giving easy mode options and representing some of the figures as bars and so forth.  Every single manufacturer however missed a golden opportunity.

When something as complex as a BIOS is opened up to the world of software, magical things can happen.  For a start, the BIOS can be made more interactive.  None of this ‘press +/-‘ to change options, but actually representing the value in a different way.  Take the fan control options used in most software models today – we get gradient inputs, sometimes multi-point gradients, sometimes hysteresis.  This is perfectly suited for a BIOS, and yet no motherboard manufacturer has thought to go down this route, with the interpolation done on the side of software.  It amazes me quite a lot.

Part of the issue is space in the BIOS – typically modern motherboards use an 8 MB / 64 Mb BIOS chip which can be limiting if more and more features are being put in.  This is partly why a BIOS is still a small screen size – if you wanted to put in a large image background, that could easily be 200kB-600kB depending on the complexity.  These chips can cost as little as $0.30-$0.50 to be put on a motherboard, but that is part of the cost, and if a chip is needed that is 2x the size, it could be as much as 2x the cost.  This is a double pain in the side of Gigabyte who insist that every motherboard up and down the range has two BIOS chips for their DualBIOS policy.  I did once argue about making a BIOS chip like a microSD card reader allowing it to have 32GB+, but was immediately shot down due to the fact that something would have to initiate the microSD reader.

Back to the F2A85X-UP4, and Gigabyte use their 3D-BIOS design to greet us on the main screen: 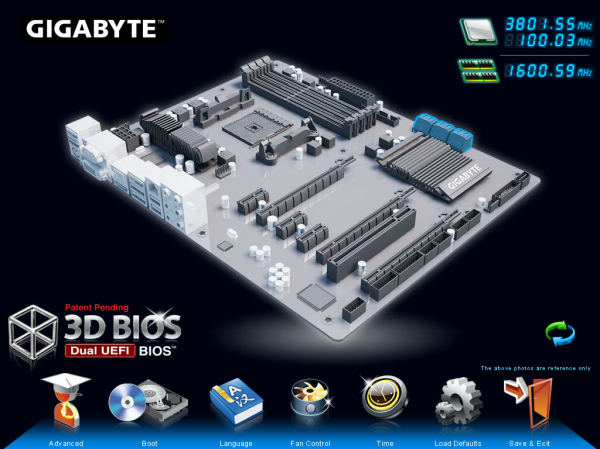 To critique the front screen, it is highly annoying to say the least.  As the image in the middle is not an actual representation of the motherboard at hand, there is no indication as to what model motherboard is being accessed.  If we had this information, we would do not have to delve into the case to see what is what.  Along with no motherboard name or BIOS version, there is no indication of the CPU model, nor the memory installed.  These are basic things that should be in every BIOS, and hopefully Gigabyte will add them in due course.

The oblique image on the front page is where the ‘3D’ part of the name comes from, and each area of the motherboard can be highlighted and clicked.  For example, clicking the CPU section gives a portion of the full options in the advanced menu: 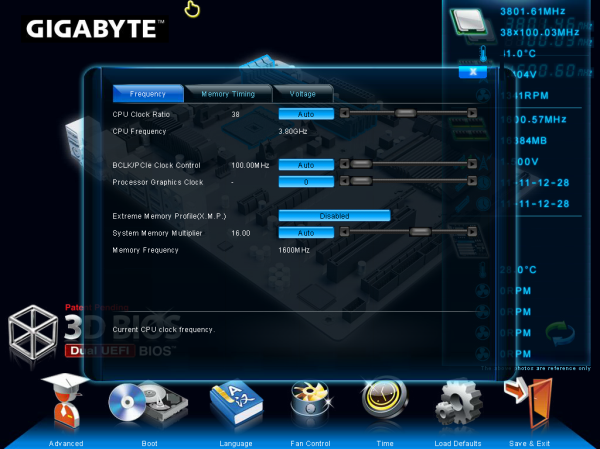 The fans can also be adjusted in the 3D BIOS by using the icon at the bottom.  This gives the following options: 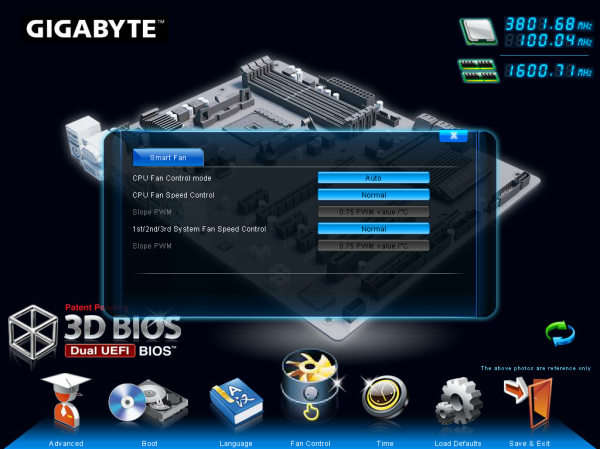 The fan headers on board are split into two categories – one for the CPU fan header and one for everything else.  The fans can be manually adjusted in terms of PWM/ºC, which is a measure of power to the fan as a variation of temperature.  As an expression of fan controls, this is absolute rubbish.  Given that the system has inputs such as CPU workload and temperatures, the internal BIOS software should be able to convert any options a user selects into a form of ‘power X at temperature Y’ table in the BIOS to act on.  The Gigabyte engineers know this as I have told them directly, and I hope it will be changed soon.

In the Advanced menu, we get a normal BIOS option interpretation: 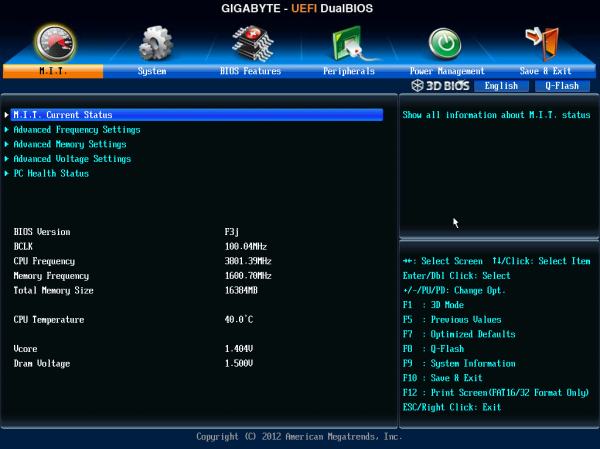 The Advanced screen here gives us more information about the product at hand than the 3D BIOS – namely the BIOS version, the CPU temperature and some voltage numbers.  Most of the overclocking goes in the following menus, although the voltage options for the CPU and memory are in separate menus to the frequency settings. 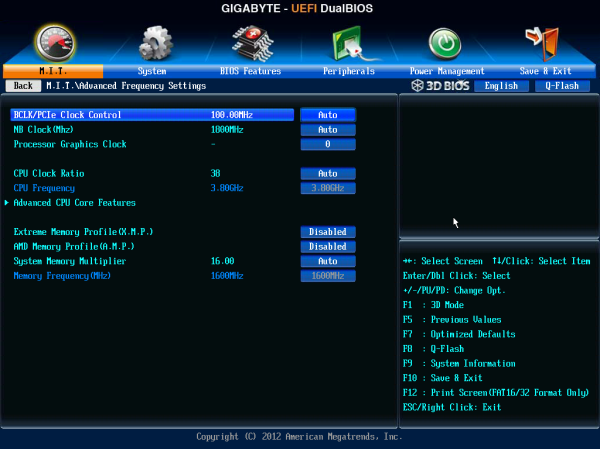 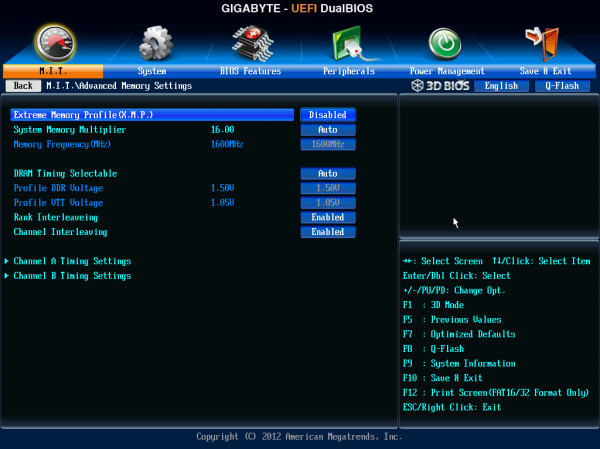 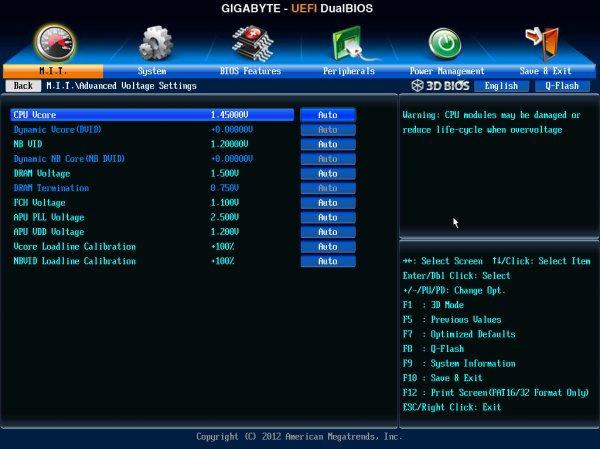 The fan options are in the PC Health part of the main Advanced menu, but offer no more options than those in the 3D-BIOS.  The boot options occur in the BIOS features menu, and the ability to turn on/off controllers comes through the Peripherals menu.

One plus point in the Gigabyte book is the boot override function, which allows for a one-time boot from a device.  This is useful for installing an OS or running a monitoring program / ghosting. 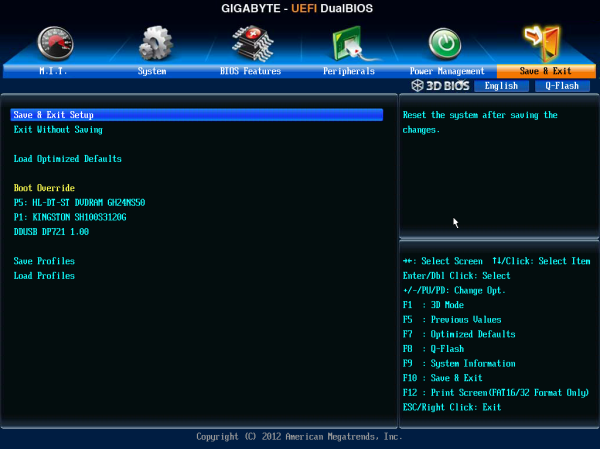