Lian-Li: What Else Can We Do With Aluminum?

Visiting Lian-Li's CES booth is usually at least an interesting experience. I often feel like the engineers and designers there just get an idea for an enclosure and "go for it," which results in a mad doctor's laboratory of experiments. Sometimes you get failed experiments (the PC-A55), sometimes you get great ones (the PC-90), but there's always something going on that's at least worth looking at. As I was telling Vivek the othe night, even if a unique product is bad, at least someone did it so nobody ever has to again. By the same token, though, if experimenting yields fruit, we all benefit. 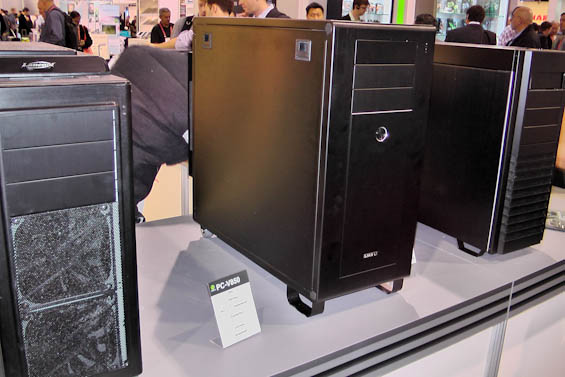 Case designers often hesitate to produce an enclosure that's necessarily wider than the standard, so the V850 on display is an interesting choice. The side panels pop off in the same fashion as Corsair's Obsidian 600T, and the rear struts are replaced with casters. Inside is a wealth of fans directed squarely at the graphics card, CPU, and motherboard area; the case is designed for cooling performance first and foremost, with noise being a distant secondary consideration. I was keen to point out to the Lian-Li rep, though, that fan controllers were very common at this year's CES at almost any price point. Hopefully this will change in time for next year. 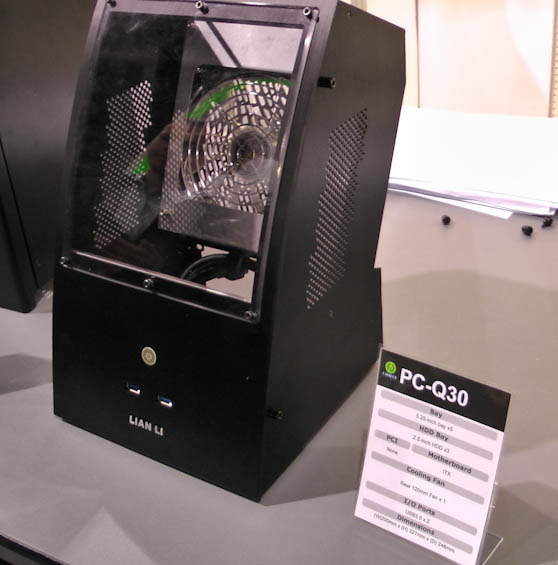 I was taken with the Q30, though I'm exceedingly skeptical about the cooling design. Thankfully this is a prototype, but it's certainly intriguing. It features a Mini-ITX mount, single half-height expansion slot, and two USB 3.0 ports in the front. The cooling is handled by a single 120mm fan that sits behind the motherboard, but that fan is actually an exhaust. I think the idea is to pull air in through the side vents, over the components, and out of the back of the case, but in practice I suspect that moving air will simply bypass the components entirely.