In and Around the BitFenix Raider

However I feel about the odd assembly (and we'll get there), I'm still convinced BitFenix makes some of the best looking affordable cases on the market. The soft-touch treatment to the surface plastic allows their designs to avoid feeling outright cheap, and as a whole there's a good fit and finish to these systems. These aren't boxes you'll be embarrassed to have visible, and the ridged/framed motif of the Raider is another winner as far as I'm concerned.

The front of the Raider is almost entirely ventilated, surrounded by strips of solid plastic. This ventilation is actually pretty opaque, but behind it lies two efficient 120mm Spectre fans. At the bottom is BitFenix's logo. Nothing super flashy, but nothing boring either. The curves keep the Raider from looking like a standard beige box. If you follow the strips up to the top of the case, you'll see the I/O nestled into the left strip and the buttons and fan controller nestled in the right. As a whole it's just a very classy looking design. The ventilation in the top of the case is only there for the 200mm fan mount beneath it, though; inexplicably there's no support for a pair of 120mm and/or 140mm fans.

BitFenix uses notched side panels on the Raider (see my last twelve reviews to get a good idea of how I feel about these), held in place with time-honored and trusted thumbscrews. Remove the side panels and you'll get a look at an oddly cramped interior. This is really where the problems start. 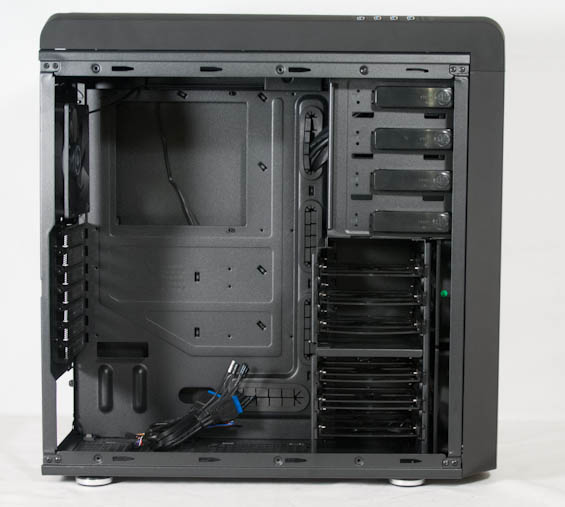 The fundamentals of the Raider's internal design are sound. There are toolless clamps for the 5.25" drive bays, two sets of three drive trays, an extruded cable channel around the motherboard tray, rubber-lined cable routing holes, and even the cabling itself is extremely neat and tidy out of the box. To remove the top drive cage, you actually just remove a single thumbscrew and the drive trays, and then the interior panel slides out. This creates additional clearance for long video cards, but we're still dealing with slightly obstructed front ventilation.

So if everything looks modern, where does the Raider go wrong? Even ignoring the case feet on the shell which are applied using adhesive (and thus invariably going to come off on their own at some point), there are in my estimation two major busts with the Raider's internal design. 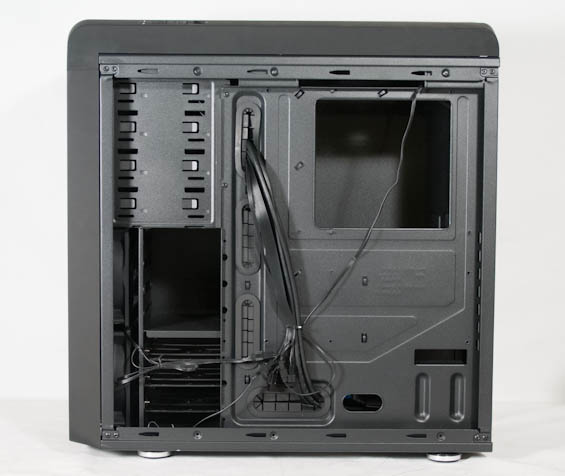 The first is the cabling: the cables aren't just arranged neatly, they're straight up taut. That should be fine, except it precludes you from removing the top panel of the case without accidentally ripping out some of the cables from their daughterboards. They're also held in place with zip ties instead of twist ties, which is another minor nuisance. Also note that because of how taut the cables are and how they're routed through the interior of the case, they effectively block off the back of the top 5.25" drive bay. You'll essentially have to undo all of BitFenix's hard work to get real use out of the case.

That's all little league compared to the real cabling issue, though: the routing holes in the motherboard tray are too small. This became a fairly frustrating issue when I went to assemble the testbed in the Raider later; the primary power cable was just plain too fat to fit through the holes.

I think the second bust with the Raider has to do with the fan mounting in the top of the case. Simply put, why weren't more fan sizes supported up here? There's clearance and virtually no reason not to, and there's even a decent amount of space under the top panel. This should be a good place to fit a radiator, and BitFenix's engineers could've made it happen, they just didn't. Alternatively, it might've been a good idea for them to just fit the case with the two 200mm fans it supports in the first place and call it a day.

As far as basic design, the Raider isn't bad but it's marred tremendously by some really goofy design choices and odd frustrations. Taken on their own, none of these things is really a dealbreaker, but cumulatively become a much bigger problem than they need be. They're problems that should've been caught and rectified early on and just...weren't.