The Galaxy S 4 features a removable 9.88Wh battery with 3.8V chemistry. The battery design is par for the course for any high end smartphone, but the fact that it's removable remains a staple of the Galaxy S design. Whether or not the bulk of consumers actually use the flexiblity offered by a removable battery is up for debate, but there's no doubt about the fact that Samsung has a strong following of users who appreciate the feature. 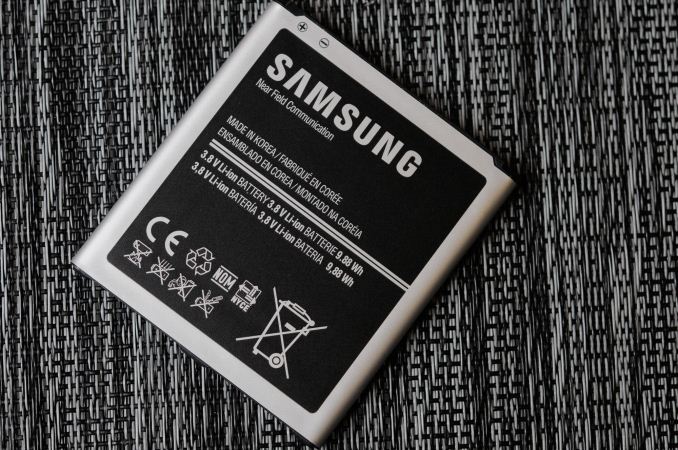 Unfortunately, only having access to the Sprint version of the Galaxy S 4 to review, most of our battery life tests on the cellular network aren't all that useful. The good news is that our WiFi tests should at least give you an idea of how well the SGS4 will compare to the HTC One when both are on the same network. We're using the latest revision of our smartphone battery life test to compare performance of all the key players here. This is now our sixth revision of the battery life test, and we feel is the optimal balance between challenging workloads and idle time. The basic overview is the same as the previous test — we load webpages at a fixed interval until the handset dies, with display set at exactly 200 nits as always. Power saving features are disabled if they turn on automatically, and background account sync is disabled. The test is performed over both cellular data on all available air interfaces and over WiFi in an environment with good signal levels. The new test has decreased pause time between web page loads and added a number of JavaScript-heavy pages. I sat down with some UMTS RRC (Radio Resource Control) emulator tools and also made sure we had a good balance of all the RRC states (DCH, PCH if possible, FACH, IDLE) so we weren’t heavily biased towards one mode or the other.

As the most relevant comparison of platforms we have today, we'll start with the WiFi version of our web browsing test: 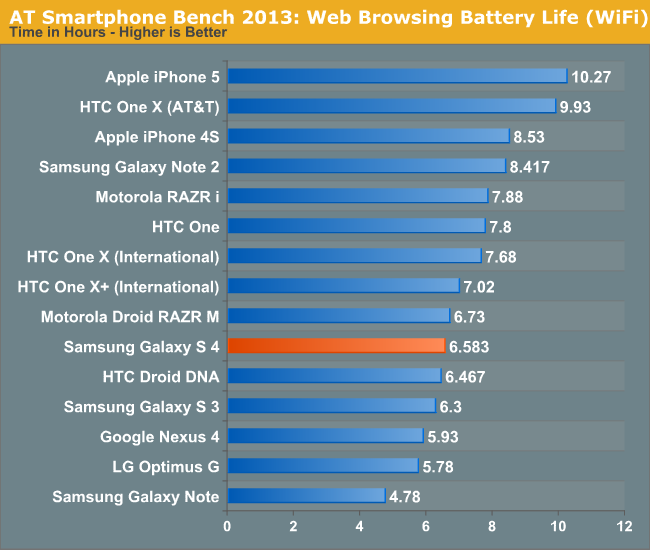 On WiFi the Galaxy S 4 falls behind the HTC One by an appreciable amount, however there's still an improvement in battery life compared to the Galaxy S 3. The Galaxy S 4's battery life isn't bad by any means, but do keep in mind that this is a large phone with a large display and a very powerful SoC. For much of the past year we've been talking about an increase in dynamic range in total platform power of high end smartphones and the Galaxy S 4 is no exception. Run it at full brightness or keep many cores running in their maximum performance states for a considerable period of time and you'll be greeted by a phone that's quickly in need of a power outlet.

As I mentioned earlier, we only have access to the Sprint version of the Galaxy S 4 at this point which unfortunately means that our 3G results aren't all that comparable to other devices here. 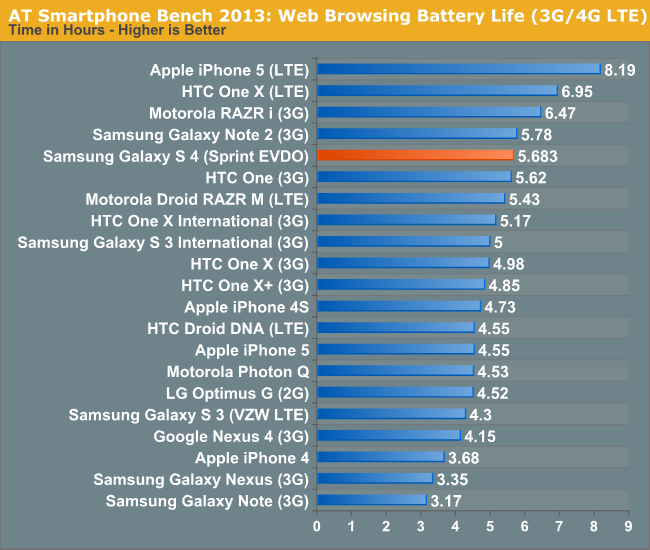 Even on Sprint, the Galaxy S 4 does surprisingly well. 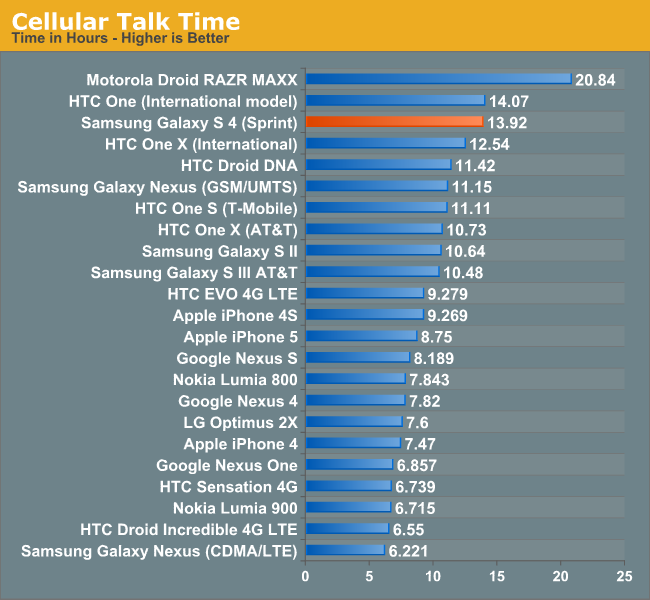 Talk time is excellent on the Galaxy S 4, with the phone delivering effectively the same battery life as the HTC One. Without having to power on that huge display, the Galaxy S 4 can last for a very long time on a single charge. 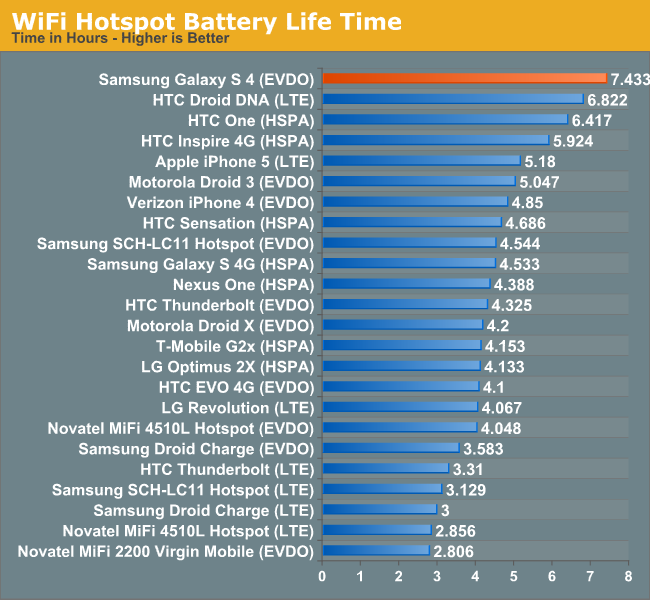 A combination of the Sprint network and the fact that the Galaxy S 4's display remains off during our hotspot test resulted in great battery life here as well. Again, this data isn't all that useful if you're not on Sprint but Samsung tells us we should be able to get our hands on an AT&T SGS4 in the not too distant future.

Samsung appears to implement Qualcomm's Quick Charge specification in the Galaxy S 4 and its bundled charger. I realize we haven't done a deep dive into what Quick Charge is and how it works, but I'll try to go through a quick explanation here. Most conventional chargers are linear, they take a fixed amount of input current (at 5V) and pass it along to the device being charged. The problem is that at deeply discharged states, the device's battery might be at a substantially lower voltage. A traditional linear charger won't change the current supplied based on the voltage of the battery being charged, and as a result can deliver sub-optimal charge times. When implemented, Qualcomm's Quick Charge technology can vary output current based on the voltage of the battery being charged, which results in less power being dissipated as heat and more being delivered to charging the battery itself. The table below helps illustrate the savings:

Quick Charge, at least in its currently available 1.0 specification, is still bound by the 5V limits of the USB BC 1.2 specification. The next revision of Quick Charge will enable higher voltage operation for even faster charge times.

The non-linear nature of Quick Charge significantly shortens charge time, particularly in the very early stages of charging when the device's battery is presumably fully discharged. As the device's battery voltage increases, current delivery tapers off and the QC advantage is no longer as great as a standard USB BC 1.2 solution. The end result though is significantly improved charge times.

The graph below shows the benefits of using Samsung's own charger vs. a standard charger that implements the USB BC 1.2 specification. When used with the bundled charger, the Galaxy S 4 recharges much faster than HTC's One, despite using a larger battery. Obviously the Galaxy S 4 will charge with any USB charger, but the charge time will simply be longer. Samsung uses a voltage divider and signals the presence of their own charger by sending 1.2-1.3 V across the D+ / D- pins, this is similar to what Apple does with 2.0 or 2.8 V across the pins for various USB chargers they've shipped over the years. This signaling is essentially Samsung's proprietary tablet charging signaling which they've employed on the Galaxy Note 2 and now SGS4, in fact the two use the same exact charger, so it's worth tossing out your old ones and getting the appropriate one to take advantage of the faster charging. 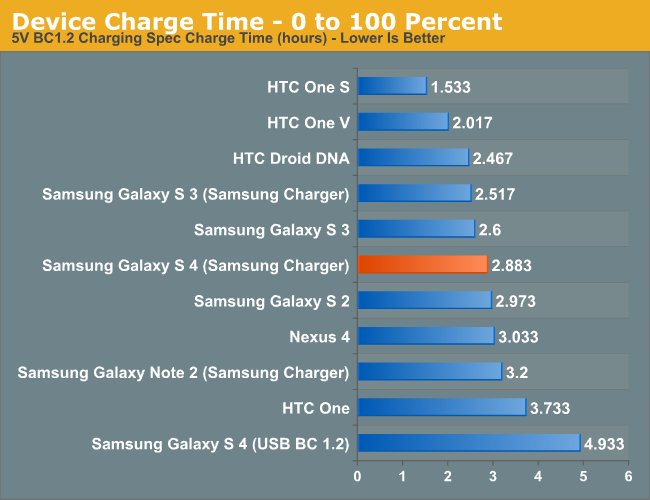