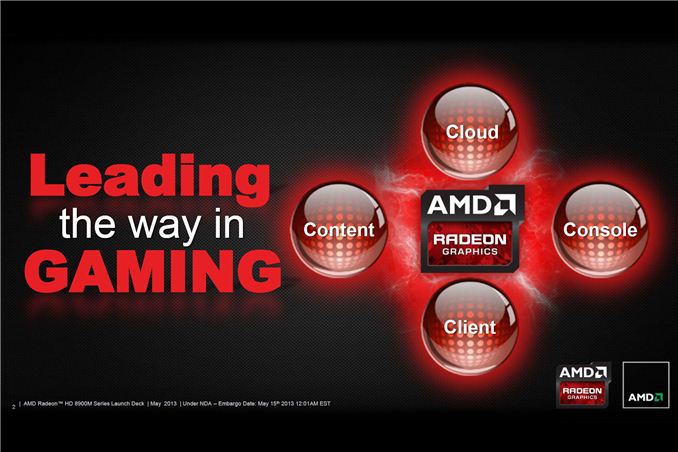 Earlier this week I noted that AMD’s Radeon 8970M and Richland A10-5750M are both available in MSI’s new GX70 3BE gaming notebook, but at the time I couldn't fully disclose the specs on the Radeon 8970M. Today, AMD is officially launching the 8970M, so we can talk specifics. Cutting right to the chase, here’s what the 8970M brings to the table, with the rest of the 8000M family details to help put things in perspective: 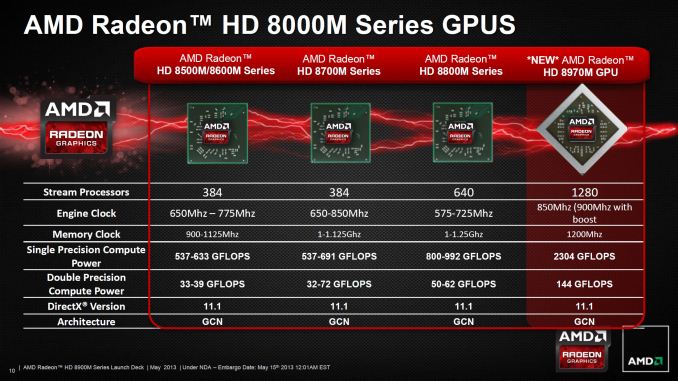 Obviously, the 8970M is going to be AMD’s fastest current mobile GPU, but what we’re missing from the above slide are the specs of the previous generation 7970M. There’s not much to add, unfortunately: the 7970M is identical to the 8970M except that it lacks the 900MHz Boost clock. Both use the same Pitcairn core (codename Neptune for the 8970M and codename Wimbledon for 7970M), with 1200MHz GDDR5 (4.8GHz effective). I’ve even got an Alienware M17x with a 7970M that overclocks without issue to 900MHz/1300MHz, so really the 50MHz Boost Clock is just a software tweak to the existing chip to improve performance by up to 6%.

While there’s not a whole lot to discuss in terms of the hardware or architecture, there’s a separate story that does warrant some discussion. For the past several years, NVIDIA has basically been on a roll as far as gaming titles are concerned, with a large number of the AAA titles sporting an NVIDIA logo. Our last two mobile gaming suites have had quite a few NVIDIA titles, and there have been other major releases with NVIDIA branding (both Batman games, Borderlands 2, Mafia II, and Metro 2033 to name a few). There are also a few recent and upcoming releases from the green team, like the just launched Metro: Last Light and Star Trek, with ARMA 3 coming down the pipeline.

That’s all well and good, and up until the past nine months or so I’d say NVIDIA had an advantage in terms of game developer support. However, check out the list of games with ATI branding from the last year or so: Far Cry 3 (and the spin-off FC3 Blood Dragon), SimCity, Bioshock Infinite, Tomb Raider, Crysis 3, DmC (Devil May Cry), Hitman: Absolution, Sleeping Dogs, and Deus Ex: Human Revolution are all on the list, and outside of DmC and Sleeping Dogs I’d say all of those are names that any gamer would recognize and most of those games have been good if not excellent. If AMD can keep up the pace of AAA releases, they might regain some lost ground. The Never Setting and Never Settle: Reloaded bundles are possibly the best gaming suites ever given away for free with a new GPU purchase. AMD is hungry, I’ll give them that. 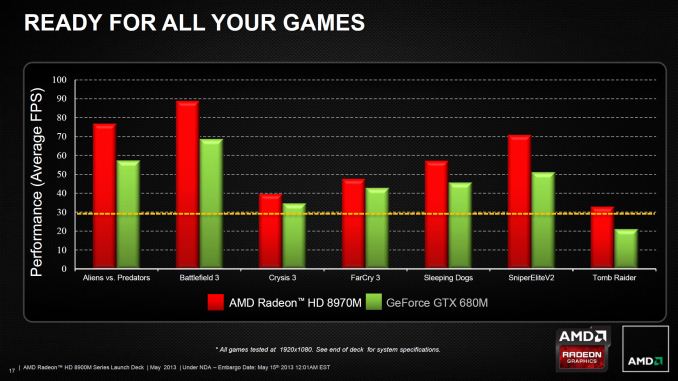 Not surprisingly, many of the AMD branded titles perform better on AMD hardware, and in general the GTX 680M and HD 7970M (nee 8970M) are basically on equal footing. With the appropriate settings and drivers, AMD shows a pretty significant performance advantage in their slides relative to NVIDIA, but as always we would take those numbers with a grain of salt. Like NVIDIA, AMD cherry picks the games and settings to put their GPUs in the best light; we’re working to provide some independent testing of a larger variety of games with branding from both vendors along with a larger spread of settings, but right now we don’t have all the required hardware in hand for such an article.

The one item that still generates some concern is AMD’s Enduro switchable graphics. My earlier encounters with the technology (especially prior to the Enduro branding) were less than acceptable, and even with Enduro I can’t say AMD has caught up to NVIDIA’s Optimus. In particular, support for older GPUs and iGPUs is sketchy at best (Sandy Bridge and Llano generally require modded drivers for support, and even then they don’t always work). There are also certain applications that present difficulties; for example, I’ve tried Bitcoin and Litecoin mining on Enduro laptops, with less than stellar results. I’m not suggesting those are critical applications for most people, but if GPU compute doesn’t fare any better it would certainly be a problem. Still, at least the last few driver releases from AMD have all had mobile versions that installed with Ivy Bridge and Trinity Enduro solutions, so that’s definitely an improvement.

The other thing to consider is that where AMD’s 8970M is basically just a rebranding and minor clock speed increase from 7970M, NVIDIA has yet to announce their GTX 780M. Oh, we know it’s coming, and I would assume we’ll hear about it sooner rather than later (the Haswell launch practically demands a new high-end NVIDIA GPU); the question is whether GTX 780M will be a rebranding/higher clocked GK104 part, or if NVIDIA will do something more—like, say, getting the higher performance of the GTX 680MX into a 100W power envelope. (GK110 in a notebook isn’t going to happen any time soon, I suspect.)

The first notebook to ship with HD 8970M is MSI’s already discussed GX70 3BE, but more will certainly follow. At the very least, Alienware and Clevo notebooks are basically a gimme, considering they already support HD 7970M without issue. Pricing will also likely continue to be in AMD’s favor—NVIDIA hasn’t made their highest performing mobile GPU competitive in price for a while, mostly because they apparently don’t need to. We’ll see if anything changes with the status quo this round, but outside of the software story the Radeon HD 8970M doesn’t bring anything truly noteworthy to the table. We’ll probably have to wait for 20nm mobile GPUs before we see major improvement in performance, but will have to wait until the next round of GPU updates.

As usual, the full deck of AMD slides is provided in the gallery below, lest anyone think we’re intentionally skipping over important information.