In and Around the BitFenix Ronin

Where BitFenix has been consistently successful in my opinion is their ability to produce cases that are aesthetically pleasing and look more expensive than they are. The soft-touch surface treatment goes a long way in differentiating their products from conventional steel boxes, and the Ronin is no exception. Also atypical is their tendency to avoid gaudy enclosure designs and styles; BitFenix is one of those rare companies able to produce a distinctive black box. If absolutely nothing else, the Ronin is at least a looker.

The front and top panels of the Ronin feature black mesh trims along the sides that sandwich a perforated soft-touch shell that allows air to flow in and out of the enclosure. At the front of the top panel are a pair of USB 3.0 ports, a pair of USB 2.0 ports, and the traditional mic and headphone jacks. The power button is large; the reset button tiny and recessed, and the power LED and IDE activity LED are blue and red respectively. It's a clean and simple design and it works. Both panels also pop on and off easily enough, but require just enough force that they feel secure when in place. 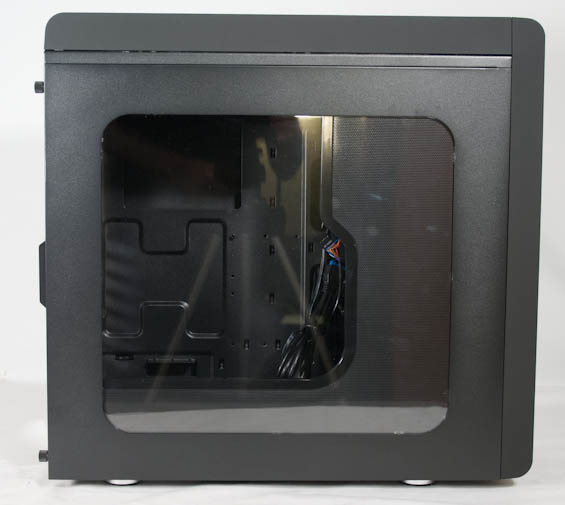 BitFenix differentiates the Ronin from other cases through the use of their "Stealth Cover"; there's a large window on the left side panel, but the stealth cover hides cabling and drives and endeavors to provide a fairly clean look at the case interior. While I'm used to dealing with reflective case windows, the one on the Ronin seems to be particularly reflective, so my apologies there. The stealth cover itself is an interesting wrinkle, though. 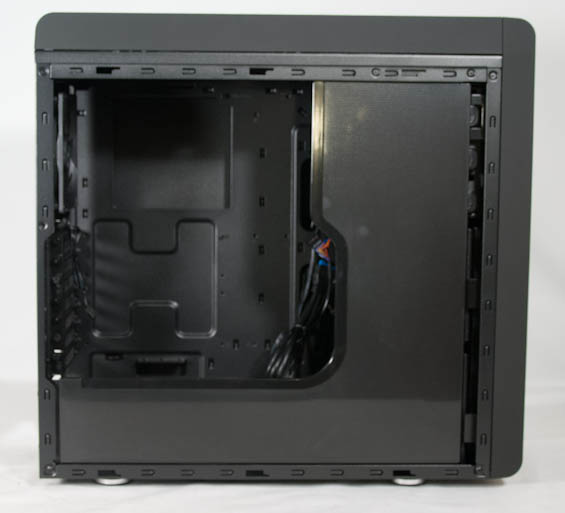 The side panels are held in place with thumbscrews, but unfortunately they're notched instead of hinged. This is less of an issue on a case this small; on larger cases it can be difficult to properly apply pressure everywhere it needs to be to get the notches to line up. The stealth cover is held in place with three snaps. 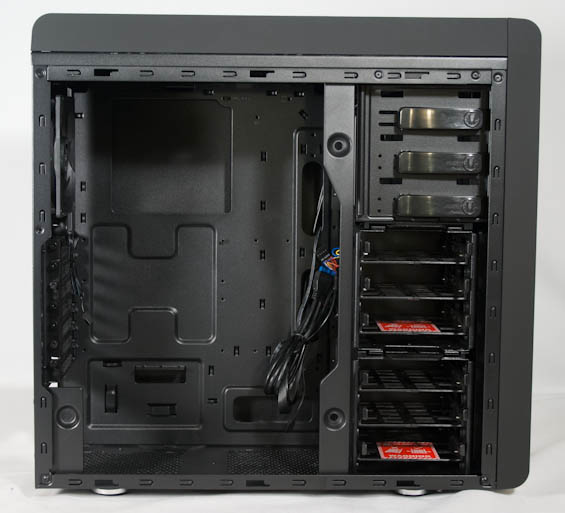 Once you're inside, there isn't anything too exciting to report. The cage housing the top trio of drive sleds is easily removable, and BitFenix's traditional toolless mechanisms for the 5.25" drive bays are in place. Of some concern are the slightly narrow cable routing holes, the extremely small one where the AUX 12V line would go, and the unusually small cutout in the motherboard tray for cooler backplates. You'll want to pay attention to this when we get to assembly.

As I mentioned before, the Ronin is ultimately on the smaller side of ATX cases. That's a trade-off individual consumers will have to make; the reduction in case width means 120mm fans are the order of the day during a period when many manufacturers are transitioning to 140mm fans. The two fans are placed in the rear exhaust and the top front intake, leaving the bottom one unoccupied. Whether or not the stealth cover is appealing is for the individual user to decide, but it's at least unique to the Ronin and I can see its purpose.