Ivy Bridge is what Intel calls a tick+, a transition to the latest 22nm process technology (the famous P1270 process) with minor architectural optimizations compared to predecessor Sandy Bridge (described in detail by Anand here):

Given the changes, we should not expect a major jump in single-threaded performance. Anand made a very interesting Intel CPU generational comparison in his Haswell review, showing the IPC improvements of the Ivy Bridge core are very modest. Clock for clock, the Ivy Bridge architecture performed:

So the Ivy Bridge core improvements are pretty small, but they are measureable over very different kinds of workloads.

The core architecture improvements might be very modest, but that does not mean that the new Xeon E5-2600 V2 series will show insignificant improvements over the previous Xeon E5-2600. The largest improvement comes of course from the P1270 process: 22nm tri-gate (instead of 32nm planar) transistors. Discussing the actual quality of Intel process technology is beyond our expertise, but the results are tangible: 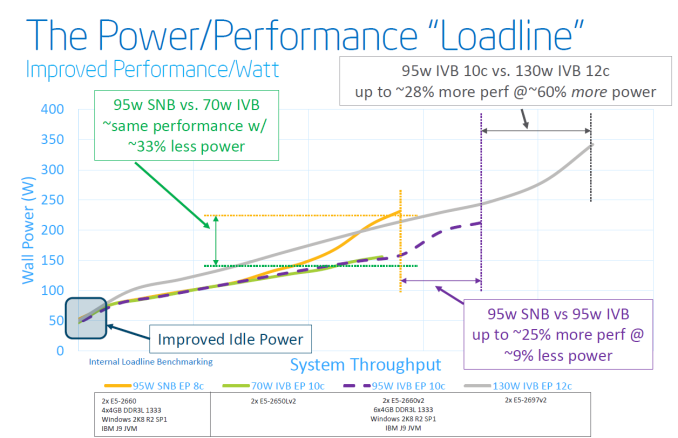 Focus on the purple text: within the same power envelope, the Ivy Bridge Xeon is capable of delivering 25% more performance while still consuming less power. In other words, the P1270 process allowed Intel to increase the number of cores and/or clock speed significantly. This can be easily demonstrated by looking at the high-end cores. An octal-core Xeon E5-2680 came with a TDP of 130W and ran at 2.7GHz. The E5-2697 runs at the same clock speed and has the same TDP label, but comes with four extra cores.

Each new generation of Xeon has reduced the amount of cycles required for a VMexit or a VMentry, but another way to reduce hardware virtualization overhead is to avoid VMexits all together. One of the major causes of VMexits (and thus also VMentries) are interrupts. With external interrupts, the guest OS has to check which interrupt has the priority and it does this by checking the APIC Task Priority Register (TPR). Intel already introduced an optimization for external interrupts in the Xeon 7400 series (back in 2008) with the Intel VT FlexPriority. By making sure a virtual copy of the APIC TPR exists, the guest OS is capable of reading out that register without a VMexit to the hypervisor.

The Ivy Bridge core is now capable of eliminating the VMexits due to "internal" interrupts, interrupts that originate from within the guest OS (for example inter-vCPU interrupts and timers). The virtual processor will then need to access the APIC registers, which will require a VMexit. Apparantly, the current Virtual Machine Monitors do not handle this very well, as they need somewhere between 2000 to 7000 cycles per exit, which is high compared to other exits. 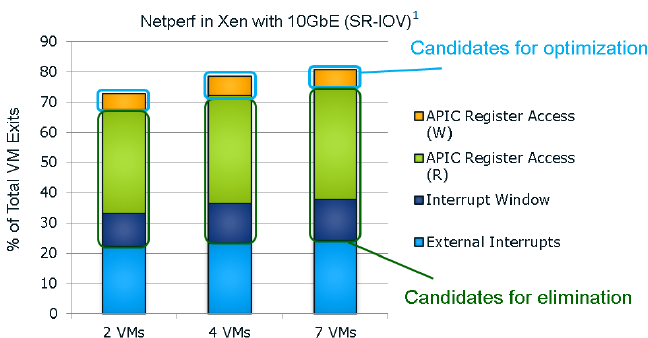 The solution is the Advanced Programmable Interrupt Controller virtualization (APICv). The new Xeon has microcode that can be read by the Guest OS without any VMexit, though writing still causes an exit. Some tests inside the Intel labs show up to 10% better performance.

Only Xen 4.3 (July 2013) and KVM 1.4 (Spring 2013) support these new features. Both VMware and Microsoft are working on it, but the latest documents about vSphere 5.5 do not mention anything about APICv. AMD is working on an alternative called Advanced Virtual Interrupt Controller (AVIC). We found AVIC inside the AMD64 programmer's manual at page 504, but it is not clear which Opterons will support it (Warsaw?).