By default all of the iMacs come with a 2.5" or 3.5” (21.5/27" iMac) mechanical hard drive. It’s been quite a while since I’ve forced myself to use a system with only a HDD, and going back to one now just reaffirms what I’ve been thinking for a while: HDD-only systems have been killing the PC industry for a while now. The experience just isn’t great. OS X continues to do a great job caching frequently used data in main memory, something the iMac has plenty of in its default 8GB configuration, so the HDD-only option does quickly become bearable. However, shooting for bearable is aiming too low in my opinion. 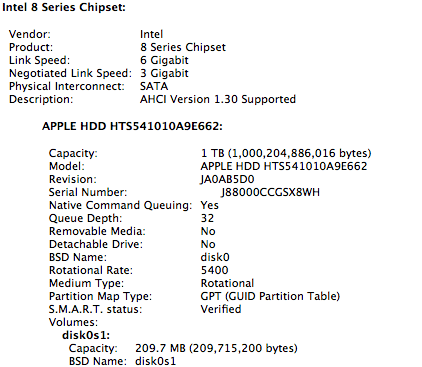 The iMac is an unusual member of Apple’s Mac lineup in that it is one of the only systems to ship with a HDD by default. Both the MacBook Air and MacBook Pro with Retina Display are SSD-only, and the same will be true for the coming Mac Pro. My guess is that Apple views the iMac as targeting a slightly different audience than those systems, an audience more used to large, single-volume storage.

Long term I believe Apple has a solution to this problem other than forcing everyone to accept a two-volume approach to storage (or, alternatively, dealing with small/fast local storage and putting everything else in the cloud). That solution is Fusion Drive.

I went through a deep analysis of Apple’s Fusion Drive with the 2012 iMac, so I’ll spare you the details here. At a high level, Fusion Drive is a software managed SSD “caching” solution on top of a 128GB SSD and 1TB or 3TB HDD. I put caching in quotes because Fusion Drive doesn’t actually act like a cache but rather a software managed, spanned storage volume. Fusion Drive appears as a single volume equal to the capacity of SSD + HDD, with the software layer intelligently managing what data ends up on the SSD and what ends up on the HDD. Fusion Drive is similar to what you’d do manually if you had a small SSD and large HDD in a single system. You’d put frequently used applications on the SSD and relegate everything else to the HDD. The difference is that Fusion Drive can manage storage on a block level, whereas you’re only able to move data between drives at a file/application level. In theory, if you had a workload that could fit entirely on the 128GB SSD, Fusion Drive would be indistinguishable from a user managed SSD + HDD setup.

In real world testing, Apple’s Fusion Drive continues to be the closest approximation to an SSD experience from a hybrid setup that I’ve tested. The reason why is quite simple: Apple’s Fusion Drive comes with sufficient NAND to cache the overwhelming majority of IO. While most hybrid setups use somewhere between 8GB and 32GB of NAND, Fusion Drive only has a single option: 128GB. I’m a bit disappointed that Apple didn’t increase that to 256GB with this most recent upgrade to the iMac, but my 128GB/1TB Fusion Drive configuration has been great for the past year. It’ll be interesting to see whether Apple eventually moves to a 256GB SSD component or if it instead makes Fusion Drive a standard option on next year’s iMacs as NAND prices drop.

My personal preference is still for a large SSD that I manage myself, combined with a large external HDD array (perhaps over Thunderbolt), but if you need a single storage volume, Fusion Drive is absolutely the way to go. I remember writing a similar line back during my initial evaluation of the Fusion Drive but thinking to myself: there can’t be that many people who really fall into this category. It turns out I was wrong.

Over the past year I’ve also had a fairly regular argument with a friend of mine who was researching computer options for his sister and brother-in-law. They are both Mac users and I kept steering him towards a 13-inch MacBook Pro with Retina Display, but he kept pushing back saying that they needed at least 1TB of storage and it had to be inside the system as a single volume. No amount of reasoning had any affect, both individuals ended up with 13-inch MacBook Pros, complete with hard drives. I’m more of the force users to adopt sort of person, but I do understand that old habits die hard for many.

Fusion Drive is of course still offered on both of the new iMacs and it’s $50 cheaper than it was at the 2012 iMac introduction. Fusion Drive should honestly be a minimum requirement for anyone buying one of these systems. I understand why Apple still offers mechanical storage as the default configuration for both iMac models, but to anyone considering either - you’ll want to at least spring for the Fusion Drive upgrade.

Doing so brings the price of the entry level 21.5-inch iMac up to $1499, the same price it would be if you opted for a 256GB SSD instead. Either option is fine, just make sure you choose one of them - even if the target user for the system is someone else. For years I’ve gone into detail as to why solid state storage is better than traditional HDDs, so I won’t go into any depth here. The experience really is night and day, and it’s honestly a must-have for any modern computer.