Typically our market position examination is done through Newegg, although an issue comes through that the PV38G240C0K kit we are testing is not actually listed.  The alternative PV38G240C1K kit, a 2400 C11 2x4 GB kit, retails for $92 at Newegg, but our kit being tested today is more expensive than this when we look elsewhere:

If we take the Amazon.com pricing list, when comparing to other 2x4 GB 2400 C10 kits, we get the following:

In our Haswell memory overview, I introduced a new concept of ‘Performance Index’ as a quick way to determine where a kit of various speed and command rate would sit relative to others where it may not be so obvious.  As a general interpretation of performance in that review, the performance index (PI) worked well, showing that memory kits with a higher PI performed better than those that a lower PI.  There were a few circumstances where performance was MHz or CL dominated, but the PI held strong for kit comparisons.

The PI calculation and ‘rules’ are fairly simple:

That final point comes about due to the law of diminishing returns – in several benchmarks in our Haswell memory overview performed very poorly (20% worse or more) with the low end MHz kits.  In that overview, we suggested that an 1866 C9 or 2133 C10 might be the minimum suggestion, whereas 2400 C10 covers the sweetspot should any situation demand good memory.

With this being said, the results for our kits are as follows: 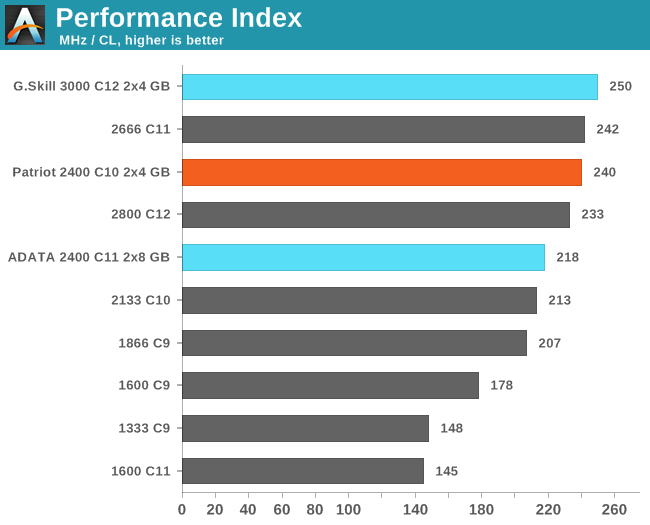 The Patriot kit starts with a very healthy PI of 240, which we mentioned can reach 266 when overclocked.