NVIDIA is launching Tegra Note running “100% stock” Android 4.2.2. The UI is essentially stock, although there are obviously additional items inside the settings menu which are Tegra Note specific, and of course the changes to accommodate Tegra Note’s built in stylus.

Like Shield, NVIDIA is responsible for timely OTA updates to Tegra Note, and although the tablet is launching running 4.2.2, you’ll basically get updates in step with the Tegra 4 BSP. There’s a few things missing from this version of the software we’re looking at right now that will make it into the final image in the December timeframe with Android 4.3, including always on HDR for the camera, and hopefully moving apps to SD card. 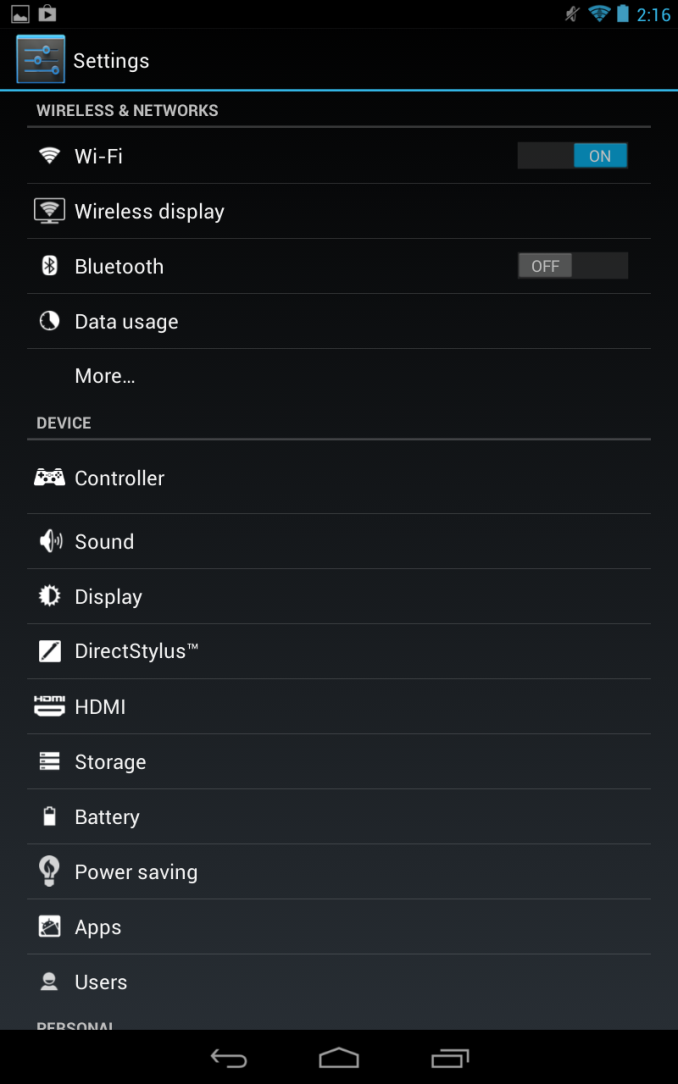 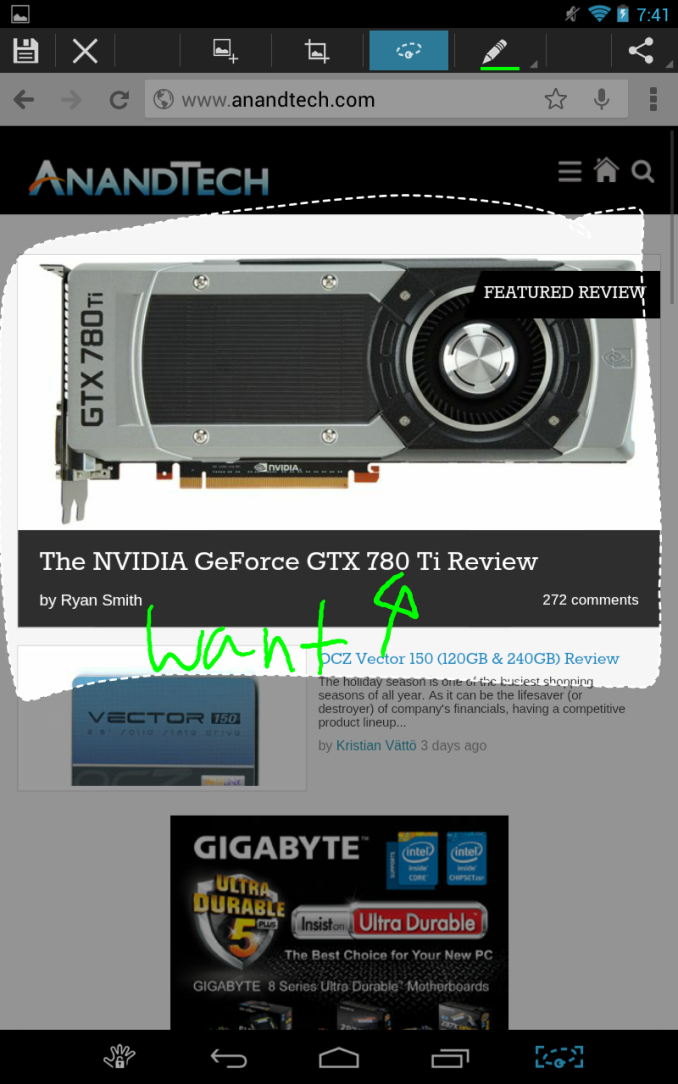 The customizations that NVIDIA has made to the Android platform primarily focus around compatibility with the custom stylus solution that lends Tegra Note its namesake. NVIDIA has coined it DirectStylus, and really it’s an evolution of DirectTouch, which offloads the touch controller processing after analog to digital conversion onto the shadow core onboard Tegra 4. 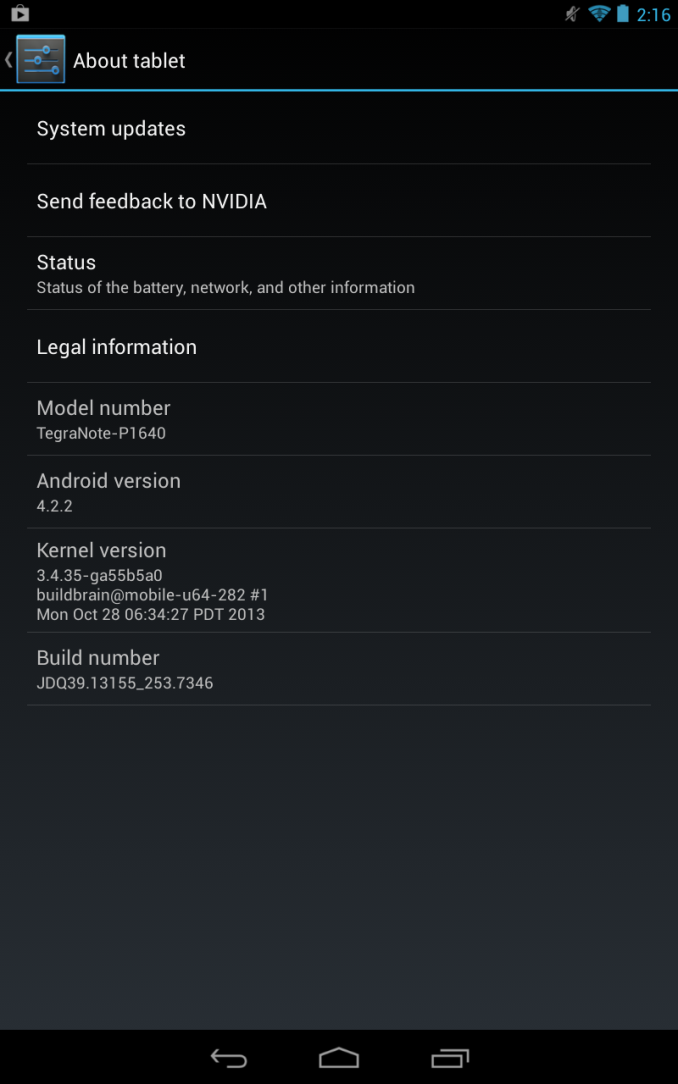 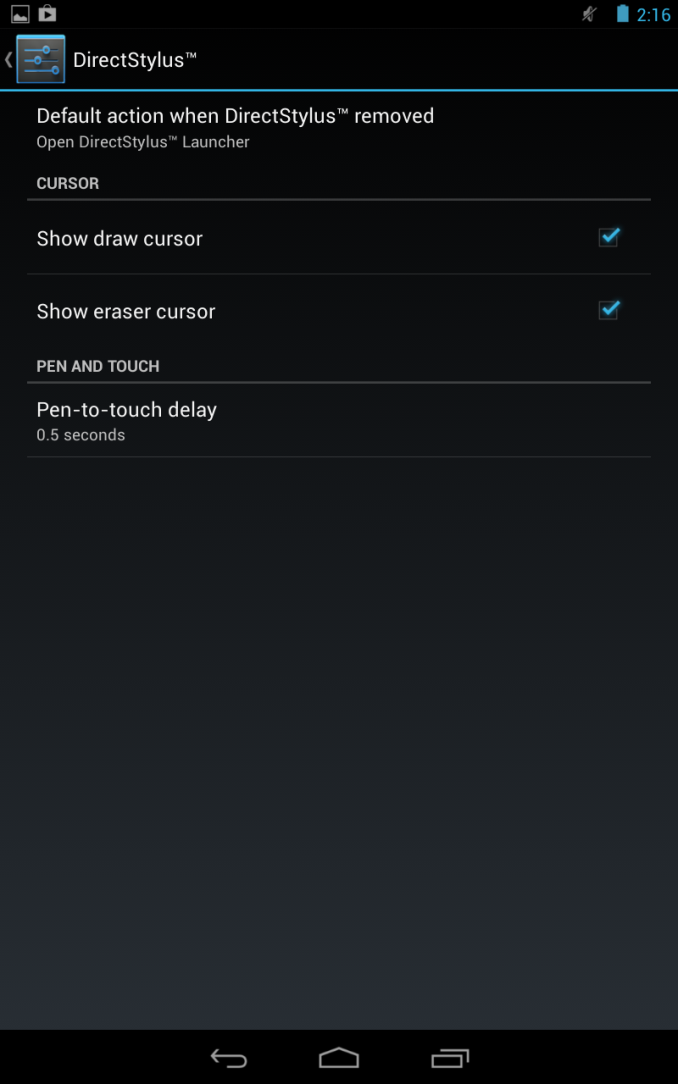 NVIDIA claims DirectStylus offers much the same feature set as an active digitizer at a fraction of the implementation cost. Instead of using an additional layer in the touch panel and a special stylus, this works with a normal capacitive stylus and digitizer. NVIDIA is being tight lipped about just how they’re sampling the display to enable detection of the two different stylus tips, but it does work. 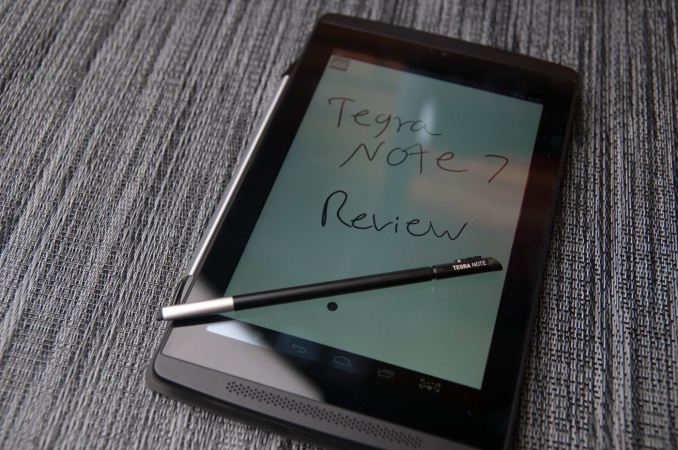 The implementation supports almost everything you’d expect from an active stylus, including palm rejection, pressure sensitivity, orientation sensitive tips (like the chisel tip), and very fine control. The only obvious omission is hover support, which active systems still seem to have a leg up with. The real differentiator for the Tegra Note however is that it delivers almost all of the experience critical for note taking, drawing, or annotating documents at a fraction of the cost. I played around with DirectStylus inking on the Tegra Note and didn’t notice any problems, if you didn’t know better you could easily mistake the experience for one afforded by a much more expensive active solution, and at the same time this solution seems to have lower latency. NVIDIA claims 3x lower latency versus a Galaxy Note 8, and although I haven’t used one directly, inking lags behind my pen tip considerably less than I remember it lagging with the Galaxy Note 10.1 (2013) or Note 3, although those aren’t direct competitors. Palm rejection works well on the Tegra Note 7 as well, something I expected would be problematic given the shared capacitive sensing. 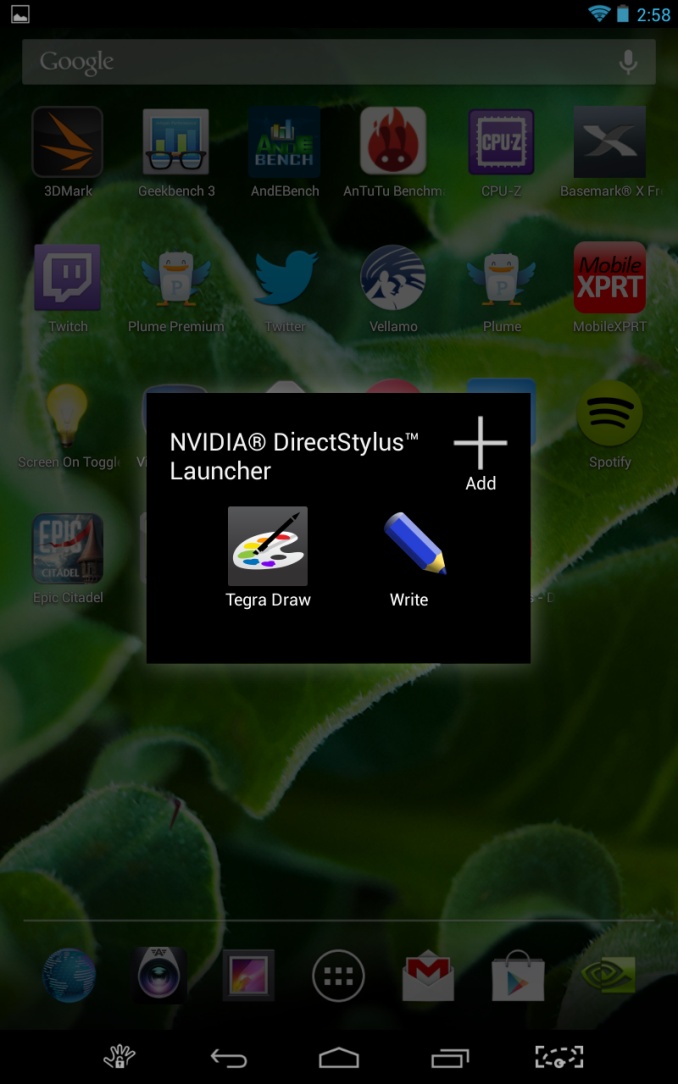 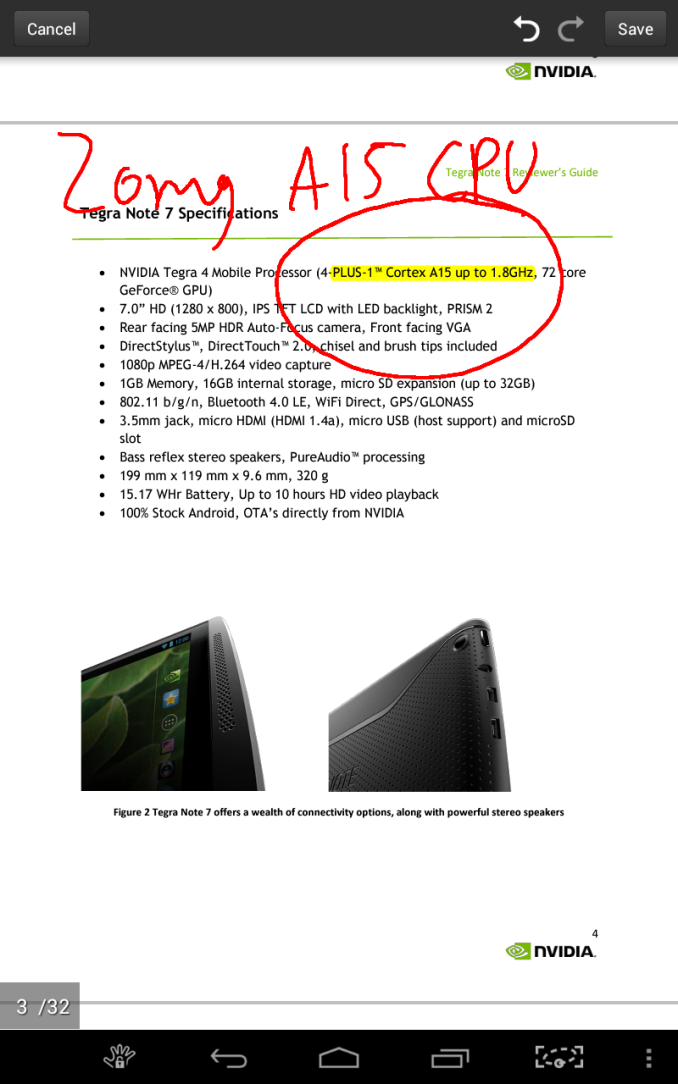 Tegra Note comes with a chisel tip stylus, although there’s also a fine point tip available. The stylus feels surprisingly nicely weighted, solid, and comfortable to use. I had limited success using the Tegra Note with the only other capacitive stylus I have available from the HTC One max, but NVIDIA claims it will indeed work with other popular capacitive styli. 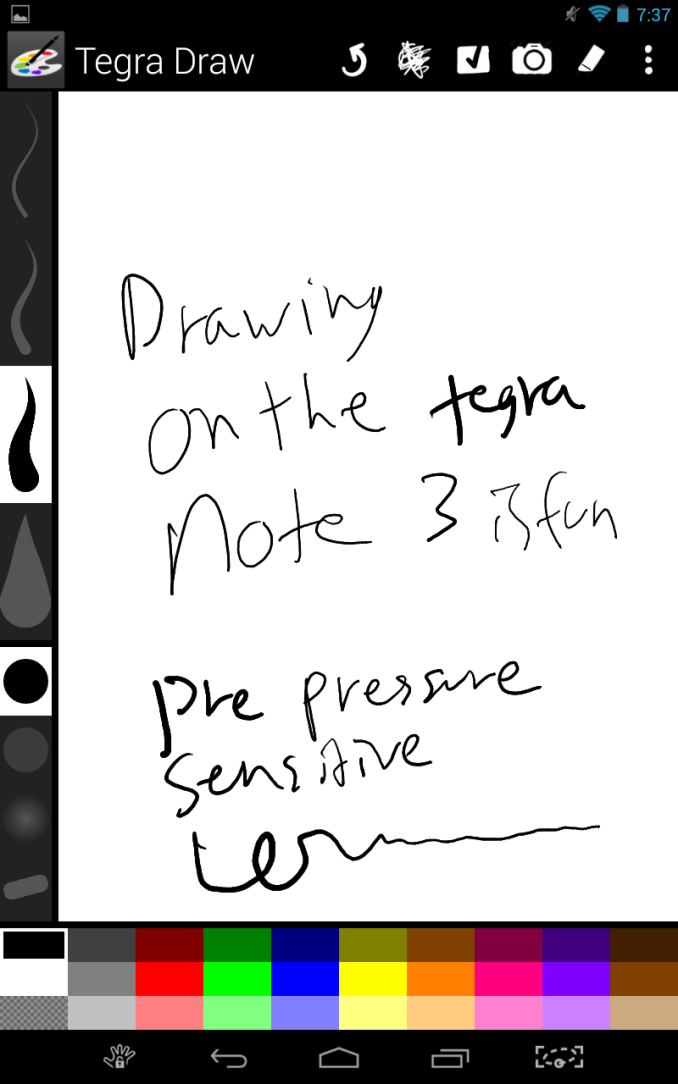 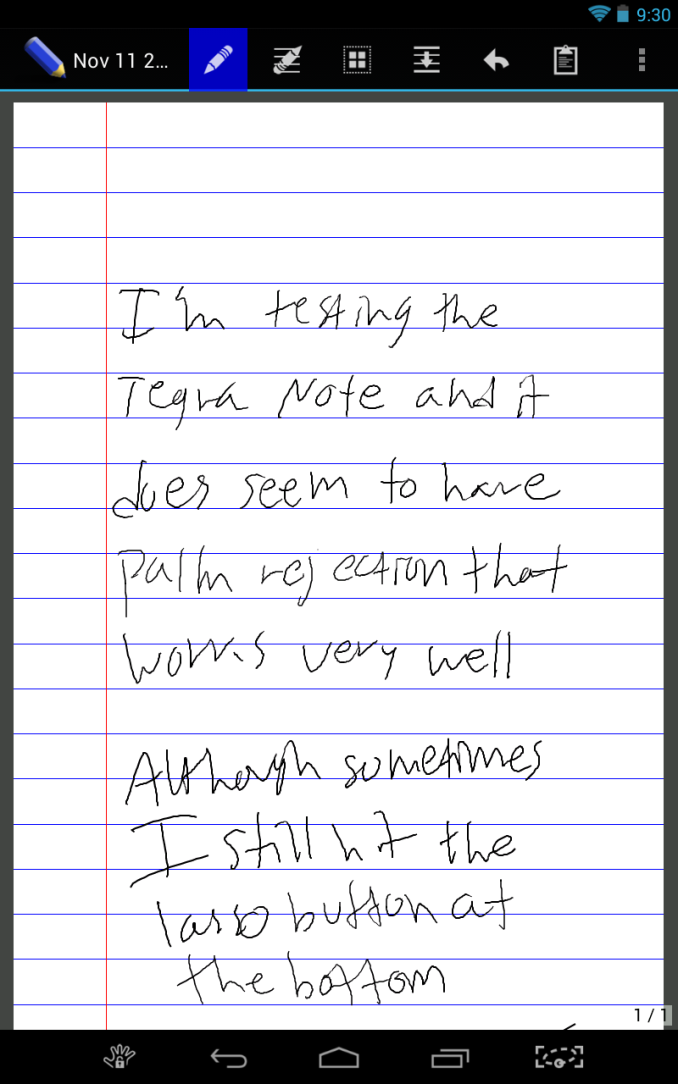 The Tegra Note comes preloaded with two inking related applications out of the box, Tegra Draw, and Write. The first is self explanatory, it’s a simple drawing app with a color picker, a variety of available software tip types, and the ability to save to a final image. The Write application is a more fleshed out note taking app with basic organization support. What’s missing is the kind of comprehensive writing to text conversion that other devices which include inking support have, or the third party keyboard that takes advantage of inking.

When the stylus is withdrawn from its holder, at the bottom are two additional buttons. One allows you to lock out other capacitive inputs and put the Tegra Note in a pen-only mode, the other is a lasso like snipping and annotation mode which lets you grab anything on screen.

Although others have more fleshed out software support, NVIDIA has nailed what I’d consider the baseline set of features necessary for a product which emphasizes its note abilities. If taking notes or drawing is a priority, the Tegra Note’s value prospect is immediately obvious compared to some of the more expensive devices with active digitizers.