As mentioned before, at current prices these modules will have a tough time in the turbulent memory market.  On 12/4, the current prices for similar 2x8GB DDR3-1600 C9 memory kits were as follows (prices taken from Newegg):

If we filter out the low voltage kits:

Or other low voltage kits:

The main competition is from the Crucial $129 kit, which seems to be a discounted offer right now.  The $157 Crucial 1600 C8 kit looks tempting, so this 1600 C9 kit from ADATA ideally needs to leave no doubt when users are looking for a LV kit and aim at the $140 price point.

In our Haswell memory overview, I introduced a new concept of ‘Performance Index’ as a quick way to determine where a kit of various speed and command rate would sit relative to others where it may not be so obvious.  As a general interpretation of performance in that review, the performance index (PI) worked well, showing that memory kits with a higher PI performed better than those that a lower PI.  There were a few circumstances where performance was MHz or CL dominated, but the PI held strong for kit comparisons.

The PI calculation and ‘rules’ are fairly simple:

That final point comes about due to the law of diminishing returns – in several benchmarks in our Haswell memory overview performed very poorly (20% worse or more) with the low end MHz kits.  In that overview, we suggested that an 1866 C9 or 2133 C10 might be the minimum suggestion; whereas 2400 C10 covers the sweet spot should any situation demand good memory.

With this being said, the results for our kits are as follows: 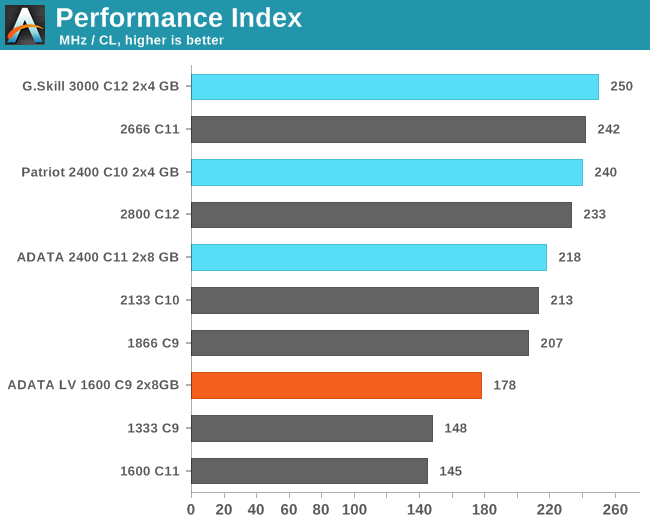 From the data in our memory overview, it was clear that any kit with a performance index of less than 200 was going to have issues on certain benchmarks.  The ADATA kit has a PI of 178, and thus in principle might drop back in some benchmarks .