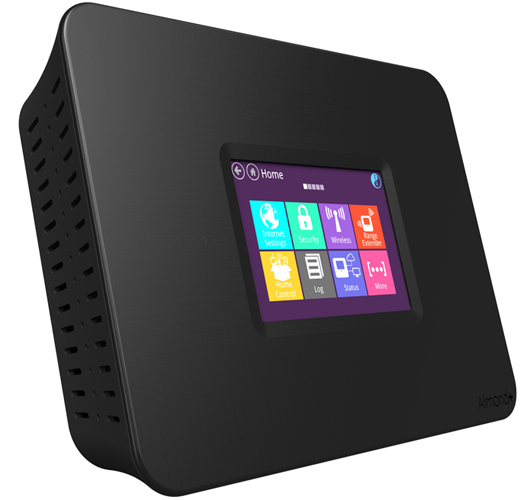 At AnandTech, we tend to avoid covering crowdfunded product pitches for a variety of reasons. There have been a couple of occasions when we relaxed our rules a bit. One such product was the Indiegogo campaign for the ioSafe N2. Despite not meeting the goal, the product did make it successfully to the market and we even reviewed it. Another product that we covered was the revolutionary 'wireless router / home automation gateway in one device' Securifi Almond+. Unfortunately, the device is yet to ship to customers due to slips in the project schedule. We met up with Securifi at CES to look at the current state of the project and understand the cause for the delays.

Securifi had started off with a Realtek-based platform, but soon ran into various limitations of the chipset. Apparently, the chipset didn't support more than 128 MB of RAM and also had support for limited amounts of flash memory. In addition to acting as a wireless router, the host CPU also needed to be powerful enough to handle the home automation devices. The router was also a 2x2 design, but all router manufacturers were moving towards 3x3 designs for their mid-range 802.11ac routers. Securifi was in a fix, and had to take a decision on whether to release a half-baked product to its backers or get back to the drawing board and start fresh with a new platform. They went with the latter option.

After deciding to move to a 3x3 configuration, Securifi's options for the 802.11ac radios were limited to Broadcom and Qualcomm-Atheros (QCA). QCA hadn't enjoyed much success in the 3x3 802.11ac router market at that time, and probably gave Securifi a better deal on the radios (AR9580 and QCA9880 chipsets for 802.11n and 802.11ac respectively). The problem with the 3x3 802.11ac solution was that the bundled SoC (network processor) was pretty weak compared to Broadcom's offering (as deciphered from the TP-LINK Archer C7 configuration). Securifi decided to take on the arduous task of making the QCA radios talk to a network processor from an external vendor, the Cortina Systems CS7542. Such systems are a nightmare for any company, as vendors keep blaming each other for issues. In any case, given the dual Cortex-A9s and Cortina's enterprise networking background, the SoC should be no slouch -- enough hardware offloading of network processing tasks, while keeping CPU cycles free for the home automation tasks / controlling peripherals. Securifi pointed out the fact that the Almond+'s two USB 3.0 ports compared favourably with the single USB 3.0 / single USB 2.0 port provided by other vendors.

Cortina's position in this product is a very interesting one. With the launch of Qualcomm's IPQ product line, it is difficult to imagine Cortina's products being used for any of the next-generation products unless the network processing benefits from the Cortina SoC outweigh the IPQ's features for the target market. A bundled deal for the radios as well as the IPQ SoCs would make any vendor think twice about any extra benefits, though. That said, Cortina wants to sell as many of their CS7542s as possible and the Kickstarter backers want to get hold of the product soon. We hope Securifi, QCA and Cortina work together to resolve any outstanding issues preventing the Almond+ from reaching the hands of the consumers.

Coming back to our CES meeting, Securifi demonstrated some home automation scenarios (including Z-Wave light dimmers, flood sensors etc.) controlled by the Almond+. CES is never a good place to verify or demonstrated Wi-Fi performance, so we didn't even venture to check that out. With developer/beta units slated to come out towards the end of the month, we should get better visibility into how the Almond+ actually performs in the real world soon.