While home networking is moving slowly forward in the march towards 10GBase-T, having high speed access in the enterprise arena can be a specific requirement for a mission critical application.  The most common way to add 10GbE capabilities are through add-in cards, or buying motherboards with them on board.  The higher specification the motherboard (dual socket or more, many $$$$), the more likely this capability is to be added.  For comparison, a PCIe card with 10GBase-T can cost $400+, so adding this to a motherboard requires that high end specification.  GIGABYTE Server (a subdivision of GIGABYTE) emailed us today regarding the release of their GA-6PXSVT single socket LGA2011 motherboard that implements a single SFP+ 10GbE port on the rear panel.

By adding this feature to the motherboard itself, it means that users do not need that add in card and can implement other PCIe devices.  The GA-6PXSVT is a fully equipped server LGA2011 motherboard with support for E5-1600 v2, E5-2600 v2 and 2nd/3rd Generation Core i7 processors.  The 8 DIMM slots support ECC and non-ECC UDIMM/RDIMM, up to 1866 MHz with E5-2600 v2 processors.  The single 10 GbE SFP+ Intel 82599EN port is coupled with two Intel 82574L Intel GbE Ethernet ports, along with an Aspeed AST2400 2D video adaptor. 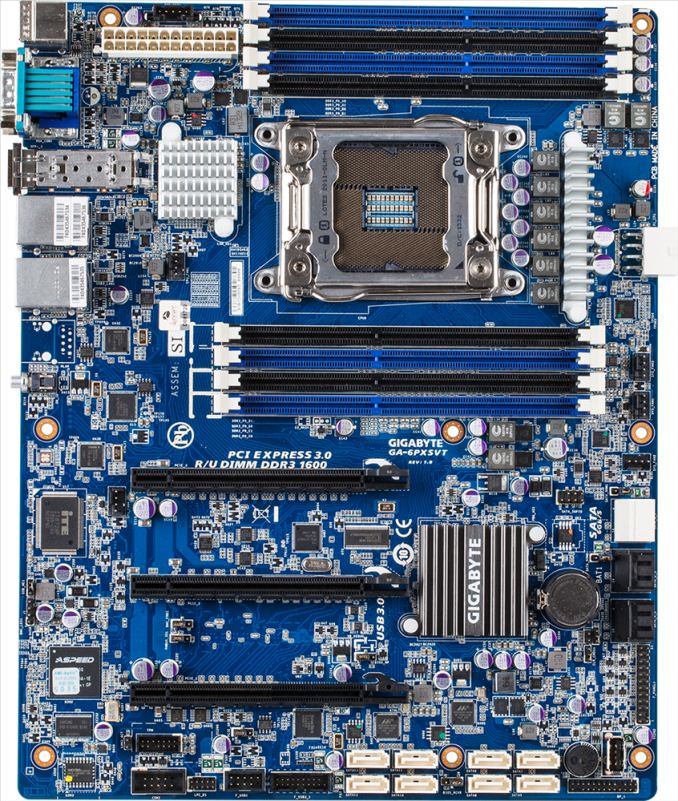 The DIMM layout is designed for a server chassis such that airflow goes from right to left as the picture is displayed.  The platform is designed for both compute and storage as well, with two SATA 6 Gbps + four SATA 3 Gbps from the C602 chipset paired with two Marvell 88SE9230 controllers, giving another eight SATA 6 Gbps ports.  Due to these extra controllers and features, the PCIe layout supports dual x16 or x16/x8/x8 depending on how jumpers are applied on the motherboard.

The motherboard has four fan headers, a physical USB 2.0 port on board (for internal licence dongles), a TPM header, a USB 3.0 header, a USB 2.0 header, a backplane board header and various server related jumpers.

GIGABYTE Server motherboards are usually sourced by GIGABYTE’s regional offices (and thus pricing and warranty is individual to the purchaser based on units), although recently they have been placed for public purchase at malabs.com, ServersDirect and Superbiiz.  The GA-6PXSVT should be availble there in the next few weeks.