Google Maps Updated to Version 8.2 With Voice Actions and Elevation for Bike Routes

It seems that Google wasn't able to ship out all their updates on Wednesday in their typical bundle of application updates. Google Maps for Android has just received an update to version 8.2 and it brings along some significant changes and improvements to the app, especially for cyclists who use Google Maps to plan their routes. 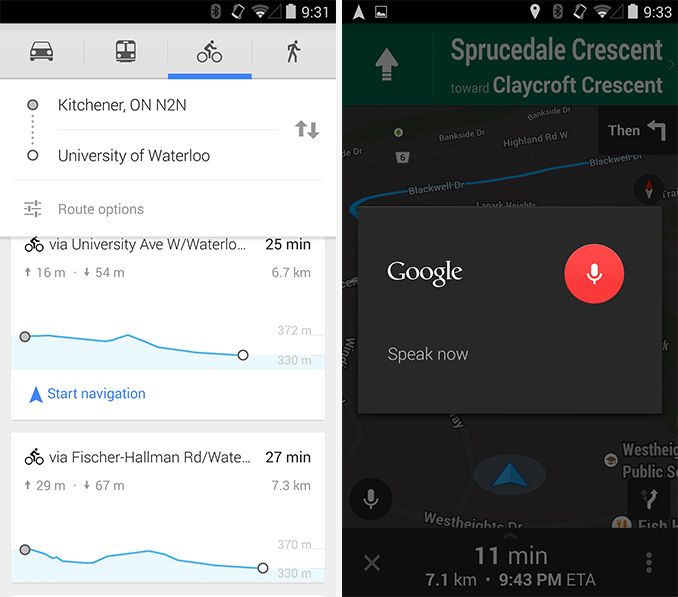 As you can see above, Google now gives an estimate of the elevation along a route when looking for routes that can be done on a bicycle. The app demonstrates it like a timeline of the route you are taking, with the height of the line representing the elevation and the slope of the line representing how quickly a change in elevation occurs. For cyclists trying to find a route that avoids large amounts of uphill travel this is certainly a useful feature. Something Google may want to add in the future to route options is the ability to show and sort routes based on a preference for the route with the least uphill travel rather than for the shortest time possible.

The other major improvement comes in the form of voice controls for vehicle navigation. A microphone button in the navigation interface brings up the voice input card, and the user can say various commands to control the application without having to directly interact with their device. Based on my time with the voice control you are able to ask it to direct you to different locations, to check the traffic along your route, and to show alternate available routes. It's not yet clear what the limitations of the in-app voice controls are and Google is sure to expand the available commands and the flexibility of the user's wording of a statement with further updates.

Google Maps 8.2 for Android is rolling out to Android users now. Like most of Google's update rollouts, it may take some time before your device receives the update. At the moment there is no sign of an update to Google's iOS version of Maps but Google has recently been rolling out updates to both apps in the same timeframe so it is likely that Google Maps for iOS will receive these features in the near future.