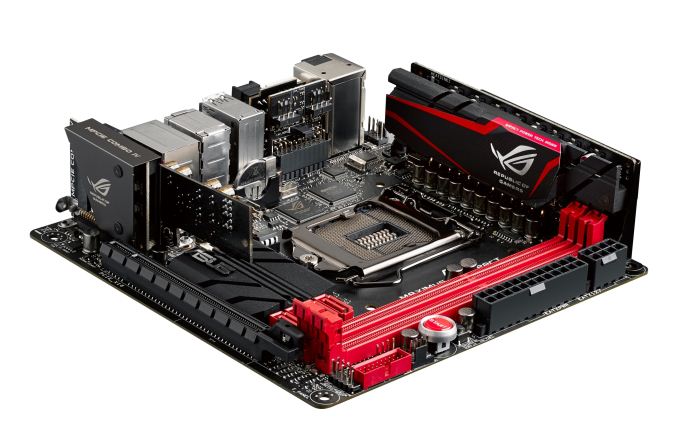 One of the highlights of ASUS’ ROG Computex Press Event was the announcement of the Maximus VII Impact, the successor to the popular mini-ITX ROG Impact range of motherboards.  Today the motherboard is officially released from ASUS HQ, with stock coming to regions shortly.  We reviewed the Maximus VI Impact last year and was appropriately impressed by the effort to include so many features in the mini-ITX platform – ASUS is hoping that this Z97 upgrade kicks it up a notch.

Similar to the Maximus VI, the order of the day is extra PCBs in order to add features.  The power delivery is upgraded to the ROG 9-series design, and the audio add-on SupremeFX card moves up with fewer filter caps in a more optimized output.  The mPCIe Combo moves up to revision four which includes a PCIe 3.0 x4 M.2 slot and a mini-PCIe slot with a bundled 802.11ac dual band WiFi module.  Note that when the M.2 slot is occupied, the PCIe slot will reduce to PCIe 3.0 x8, although our previous testing of a similar feature shows no frame rate difference at 1080p. 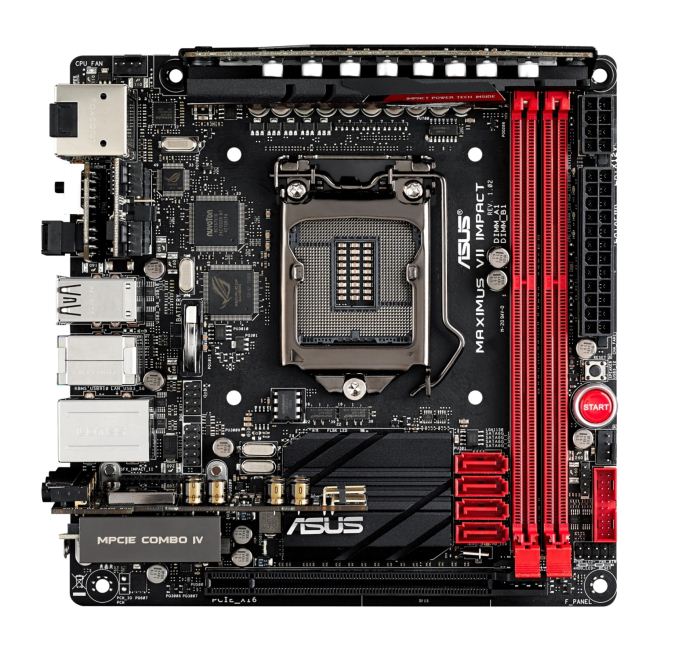 The Impact Control on the rear panel uses the same two-digit debug as the previous version, along with ROG Connect and a Clear CMOS button, but the two buttons included are for the KeyBot and SoundStage functionality introduced with the Maximus VII range.  KeyBot is a feature to enable macros with any keyboard with the ASUS software, and SoundStage acts as a configurable op-amp that modifies various aspects of the audio output to be more suited for various styles of gaming.

Interestingly enough the rear of the Impact Control is another PCB, holding two 4-pin fan headers to compliment the 4-pin CPU fan header on the top left and the chassis header on the right of the motherboard.  Also of note is the rear panel, where a single block of USB ports uses two USB 3.0 ports and two USB 2.0 ports – this configuration I have not seen on a motherboard before and could pave the way for something on most motherboards for the future.

The DRAM slots use single side latches on the power delivery side, and the power connectors are gladly on the outsides of the motherboard. This follows the start button, a fan header and a USB 3.0 header.  The front panel header is also on the right side of the DRAM slots.  The SATA 6 Gbps ports are unfortunately just inside the DRAM slots and all in the same direction, perhaps causing issues with trying to remove locking cables.

The socket area is up against Intel specifications, suggesting that CPU coolers might be up against the power delivery or tall memory modules.  The audio is buffeted by Sonic Rader II, an onscreen representation of directional audio, and networking comes via the 802.11ac WiFi and an Intel I218-V with GameFirst III. 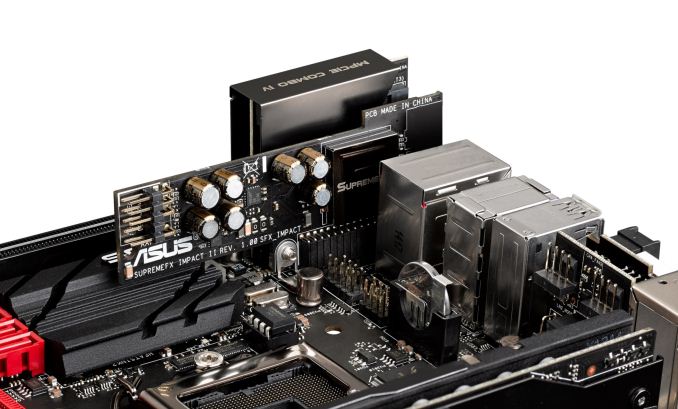 We are awaiting information from ASUS’ US office for pricing and availability.