When we looked at ASUS’ testing facilities back in June, my experience in motherboards gave me a sense of what I should expect at the time. Though despite being a keyboard user since my Commodore 64 and on the mouse since the Acorn, the phrase ‘testing facilities’ for these products produced an almost blank mental image. After taking the tour at Logitech, I came back with a large facepalm because ultimately this testing is part obvious, part stretching the limits of the technology. 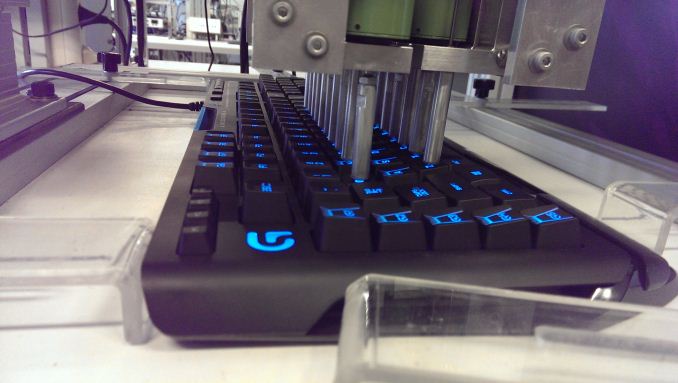 Testing keyboards for those 70 million keypresses seems a bit arduous to do manually. So the obvious thing is to automate the process. We were shown two different ways of testing the keys – either as a process or specifically in a gaming orientation: 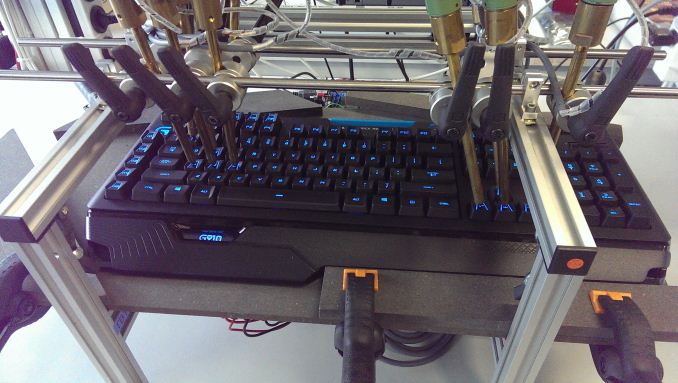 Similarly, testing mice for longevity requires its own system: 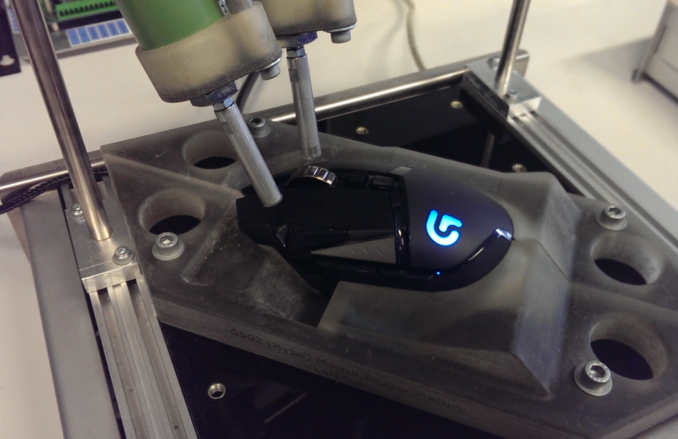 Another element of the mouse is also the sensor, firstly in terms of angular accuracy: 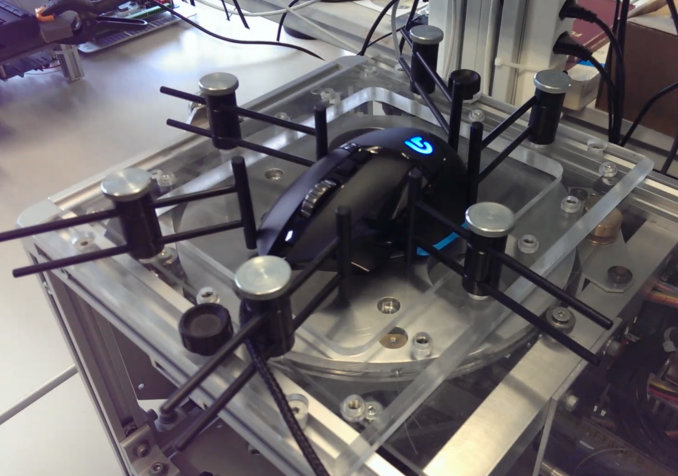 And then for circular motion on different surfaces, such as glass: 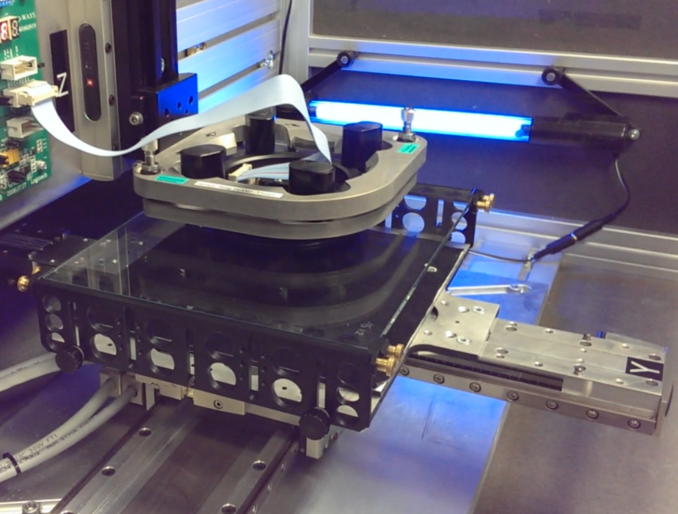 We have a series of videos on YouTube showing these in action here.

One of the elements of the mice to test would be the effect of acceleration on different surfaces, for which Logitech developed this machine: 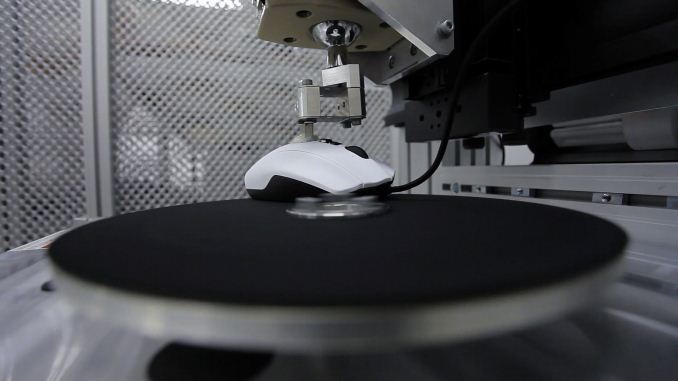 With this machine the mouse would be glued to this arm and the surface would be spun at up to a couple hundred inches per second (ips). This test would take place on a set of prepared surfaces: 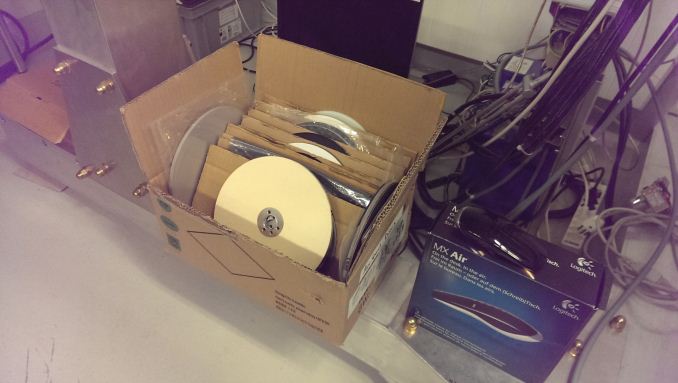 There were boxes in this testing room labeled ‘standard testing kit’. I wonder where the ‘advanced testing kit’ was and what was in it. 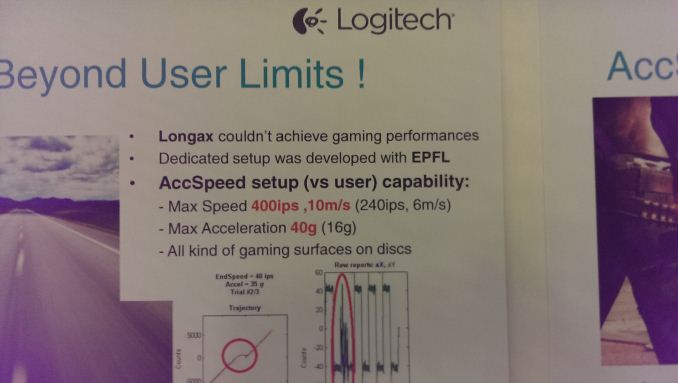 (Apologies for the off color images, my DSLR failed earlier in the day and my cell phone has a low light sensor defect)

How mice respond to speed was an important aspect to the tour. In this poster, as was mentioned several times, speeds of up to 400 inches per second can be reached by professional gamers, particularly in intense MOBA or FPS type environments. Due to this speed, Logitech had to develop some interesting equipment to not only test their solutions, but also develop new sensors that could cope with it. 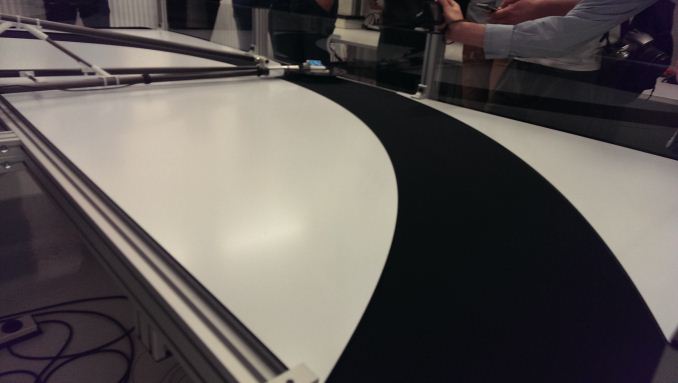 One of the bits of equipment is this above – an arm designed to move a mouse up to 500 ips on a gaming mat surface. In this mouse, the sensor response is calculated based on speed. A normal mouse fails with this equipment, and as a result Logitech developed a new sensor which uses a combination of optic tools and accelerometers to determine the position in order to update the PC. Normally the mouse works on the optical sensor, calculating overlap of the position of the mouse to tell the PC where it is. When the speed of the mouse is faster than the optical sensor can compute, the mouse switches over to the accelerometer: 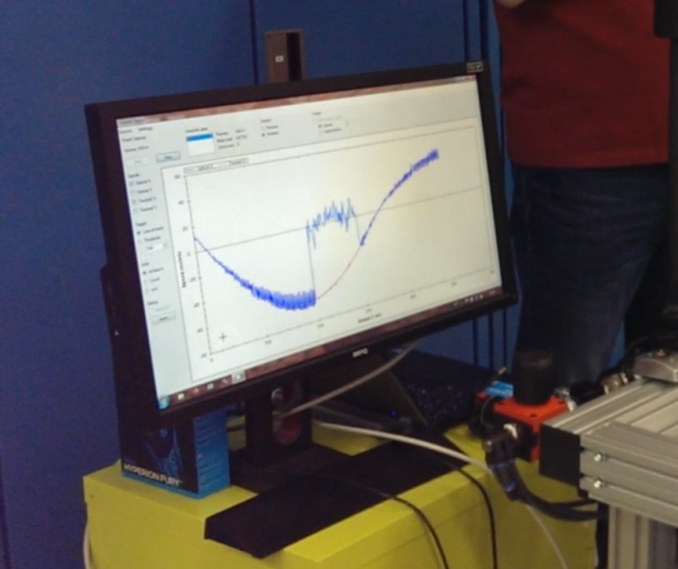 Using the G402 mouse, the blue line represents the optical sensor and the red line for the accelerometer. When the optical sensor gets too fast (in this case, a negative acceleration detected), the message back over USB is one of garbage because the optics cannot determine where the mouse is in relation to where it was. This is where the accelerometer takes over until the mouse is back to where it can understand the situation again. One might wonder why not use the accelerometer all the time? We were told that the accelerometer is actually not that good at determining position when at slow speeds, but is ideal for this sort of scenario. We have a specific video with Logitech discussing this equipment here.

An element of discussion I was interested in was the development of wireless products, particularly mice. I keep referring back to my wireless G5, which I thought was great. The stigma of wireless mice for professional gaming is still alive and well, to which Logitech’s engineers say is now unfounded due to their design and testing. 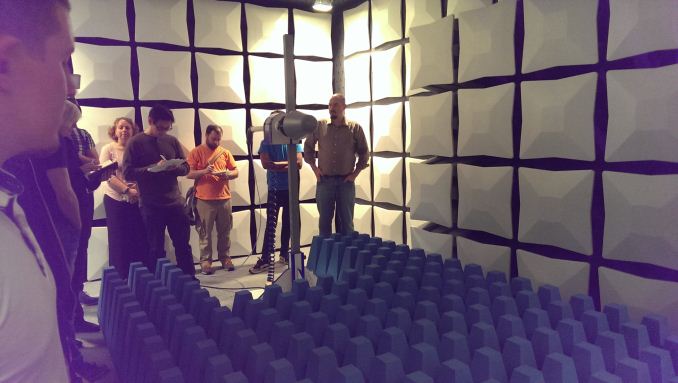 This is Logitech’s RF anechoic chamber, designed for testing radio frequency response of wireless peripherals. The room cost several hundred thousand euros in terms of building and equipment, but the basis is to characterize how wireless performance changes as you rotate a device.  The best way to describe this is with a diagram: 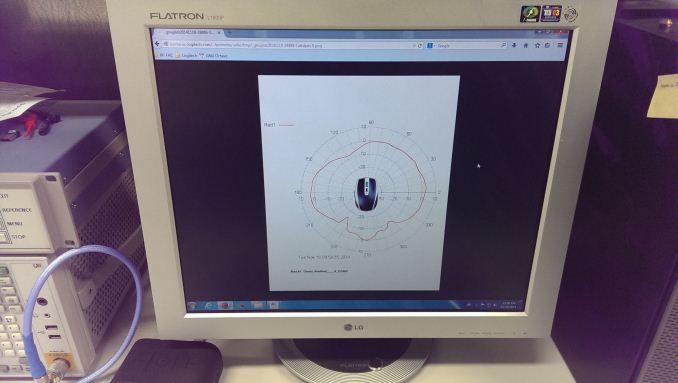 Here we have the result of a wireless mouse and the strength of the response dependent on the angle on which it is pointing. Logitech uses the anechoic chamber as well as modeling software to design the mice: imagine that you can stick the wireless antenna on the mouse anywhere you like within the shell, but certain areas are affected by the composition of material in that location (a hard rubber, plastic, or metal frame). By using a combination of simulation and real world results, Logitech can optimize the design along with gamers to avoid dead zones and maintain a high bandwidth throughout. The use of simulation allows Logitech to test designs before prototyping, and confirm a good correlation between simulation and real world (similar to lots of other areas of manufacturing). 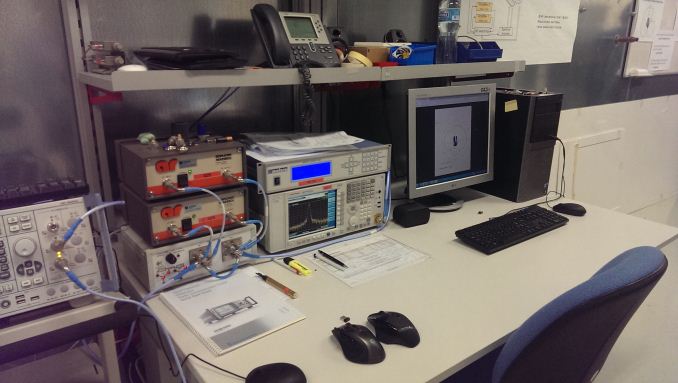 Some of those hundreds of thousands of monies are spent on this sort of equipment. Logitech also addressed a question about batteries, stating that their gaming mice can support up to 250 hours of use between full charges. Makes a difference to the 8-12 hours I used to get, for sure.

Some More about Romer G and the G910

Being their first own-designed mechanical switch, Logitech wanted to go in a bit more detail. The switches were co-designed between Logitech and Omron, with manufacturing occurring in Japan. The aim was to emulate Browns, the most common gaming type of mechanical switch, but offer something scientifically better in every way. This means a shorter actuation time, a smaller actuation point, a longer lifetime and a brighter switch overall. 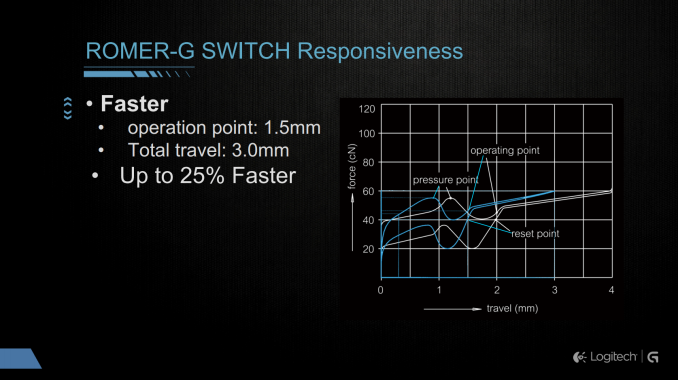 Each switch has an RGB LED, allowing for a full 16 million color customization in each key. This is controlled by the Logitech software which in itself requires a completely separate article going through all the separate per-key and per-application lighting arrangement it can support. Several media during the day amusingly set the colors of the keyboard into the flags of their respective countries – the UK flag would be a bit difficult. But Logitech (like Corsair in many respects) is still exploring the ways that a full RGB keyboard might be useful for users. 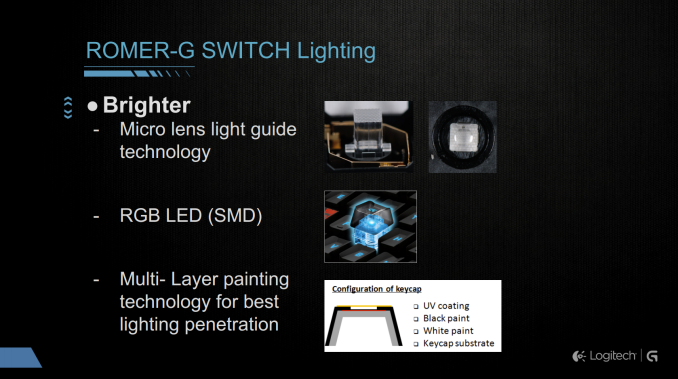 The G910 supports ARX Control, which is Logitech’s next generation of on-keyboard display. Rather than implement an LCD panel on the keyboard in previous generations, Logitech is leveraging the fact that most gamers have a smartphone on hand with its own high quality LCD display. With the Arx Control app installed (both iOS and Android), the user can have in-game stats, peripheral management, media management or even use the device as a form of control. Arx itself is still somewhat in a development phase, with all the required SDKs available for programmers to design their own tools either for gaming or as something to optimize the workflow.

As a writer, I almost exclusively use Cherry MX Blues at home. There’s something of a whiff of nostalgia when all the clicking is going on, and the only beings I annoy with the noise are my two cats during the day. I am a gamer, and while I enjoy twitch style gaming, I end up being a bad loser and prefer to play against easy bots. Romer G is aimed more at the competitive gamer for sure, where faster reactions matter most. The G910 will retail at $180 in the USA, or £160 in the UK.

As with most PC part manufacturers, sponsoring one or more professional eSports teams has now become the standard in trying to promote the brand. 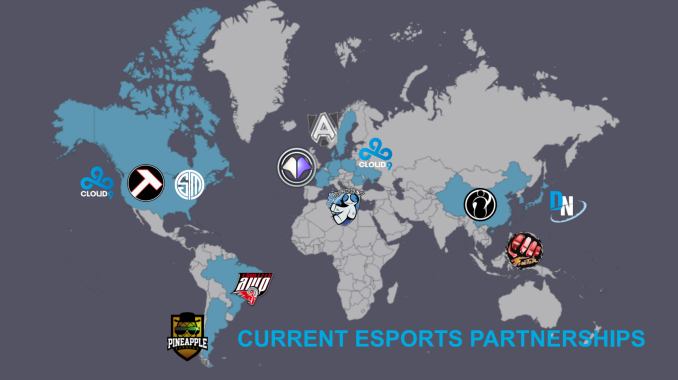 At the Tech Day were the CS:GO team from Cloud 9, along with a Hearthstone player, a member of the Alliance LoL team and also the LoL Team SoloMid. Some of the day’s Q&A was directed at the gamers, and although I have been away from semi-competitive clan gaming for almost a decade it is interesting to see how the professional scene has grown. 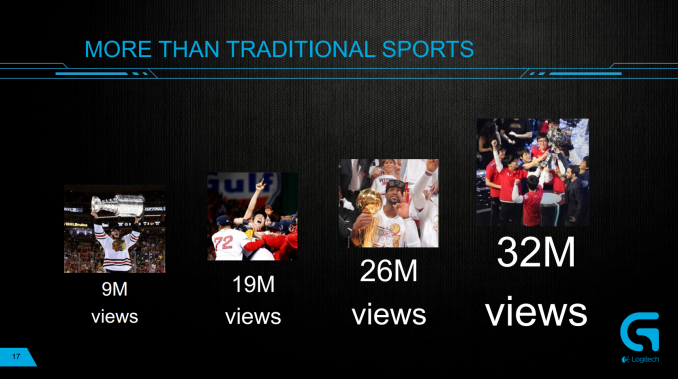 Logitech’s involvement, as with many others, is pretty obvious given how much viewership of eSports is now growing beyond most of the high profile sports in parts of the world. It still has a way to go before catching up with the World Cup, Super Bowl or Formula 1, but it might make sense that companies like Logitech latch on because the point of advertising is to pinpoint eyeballs on your product.

As part of Logitech’s sponsorship to teams like Cloud 9, they are one of 3-5 sponsors that cater for the basic needs of the team. A professional team has to cover housing, hardware, salaries, training and housekeeping on their base line, followed by boot camps, tutors, pay-to-enter events as a secondary tier. Talking to the managers of the gaming teams at the event, it would seem that prize money is an extra bonus on top of this, being split between the players. This means that Logitech has no formal equity in the team as an investor, but their benefits are eyeballs on their brand, discussion and development of the product for the wider market as well as the ultimate potential to be featured in a large final tournament somewhere. I remember a graphics card vendor telling me that advertising on streams ends up with a nice percentage of clickthroughs than some other advertising, especially when it comes to large events.

As part of the event, some CS:GO machines were set up for contests, although I declined on the fact that while I have played Counter Strike, I had not touched Global Offensive. That was rectified in the steam sale this week, along with a couple of new benchmarks for next year’s reviews.

The Future of Logitech

Part of the event was the official sale dates of the G302 Daedalus Prime ($50) and G402 Hyperion Fury ($60) mice as well as the G910 Orion Spark ($180) keyboard with Romer G switches. It was discussed at the event about future product, particularly those aligned with certain types of game or even branded by the teams that Logitech sponsor. Naturally discussion of future products was kept to a minimum, except that iterations on a theme are particularly common and that the SDKs surrounding their software packages are continually in development, especially for Arx Control.

Now as part of the media inner circle, we hope that we can get some of these products in for review. We would like to thank Logitech for the trip to their base in Lausanne.