Over the years we have reviewed a number of Republic of Gamers (ROG) motherboards, usually focusing on the high end Extreme and gaming ATX focused Formula. We probed the Maximus VI Impact late last year and it offered a sense of premium to the high end that no other mini-ITX did, but we concluded it would be a tough act to follow. The sequel is now here with the Maximus VII Impact, ready for Haswell.

When we think about small powerful computers, many manufacturers and end users can produce something impressive in something smaller than a shoe box. Custom designs are what they are, but for general production, we tend to stick to the predetermined sizes of mini-ITX, micro-ATX and ATX. The ROG brand is constantly marketed by ASUS as one of the best places for gamers to source components, but in ASUS’ effort to offer more functionality it would seem that the mini-ITX sized PCB isn't enough. This is why the Maximus VII Impact (M7I) has five additional circuit boards alongside the actual motherboard itself.

Some of these we were familiar with from the Z87 version of the Impact - a right angled power board, a connected audio board, Impact Control for rear IO buttons and the mPCIe combo with M.2 support and dual band 802.11ac WiFi. For the M7I all of these have evolved into a new iteration, including the mPCIe combo with M.2 x4, and a new daughterboard for extra fan controls. This is in response to requests from users who needed more than two or three fan headers that normally accompanies this size of product. This new board gives two extra headers that are both PWM and DC controllable on a small PCB near the rear panel.

Asus is also supplementing the design with their ROG software and BIOS package.  From the BIOS perspective this means more overclocking options and presets with features like “GPU.DIMM Post” to indicate if slotted devices are detected at turn on. The software revolves around AI Suite III in a red and black livery with 5-Way Optimization as the key app.  Alongside these are GameFirst III, ASUS' in-house version of network prioritization software, and KeyBot which allows the users to define the top keyboard function key row as preset macro buttons. These features can work in conjunction with the updated version of Sonic Radar II which enables an onscreen visual representation of directional sound in game. As an update over the previous version of Sonic Radar, we can configure what frequency band of audio is the focus for the visual (low bass, mid-range or high frequency). On the audio side we get SoundStage which offers a selectable hardware filter adjustment.

Benchmark wise, the impact comes out from our test suite rather well, scoring top marks in most of the tests due to the aggressive multicore turbo implementation going from idle to the maximum turbo frequency whenever CPU load is detected. POST times come in under 10 seconds, and load power consumption in our test-bed was under 150W for the system.

The Asus Maximus VII Impact is currently available for $240, making it the most expensive mini-ITX motherboard on the market, but it continues to lead the standard for premium small form factor gaming builds.

Out of habit, one of the first things I check on a mini-ITX motherboard is the power connector locations. Throughout the years the mainstay for mini-ITX power has been in the middle of the motherboard near the rear panel, meaning that cables have to stretch over components and causing potential air flow problems (and affectingthe look). Thankfully the Impact puts both the 24-pin and the 8-pin power connectors on the extreme right hand edge, where cable management should be pretty easy. 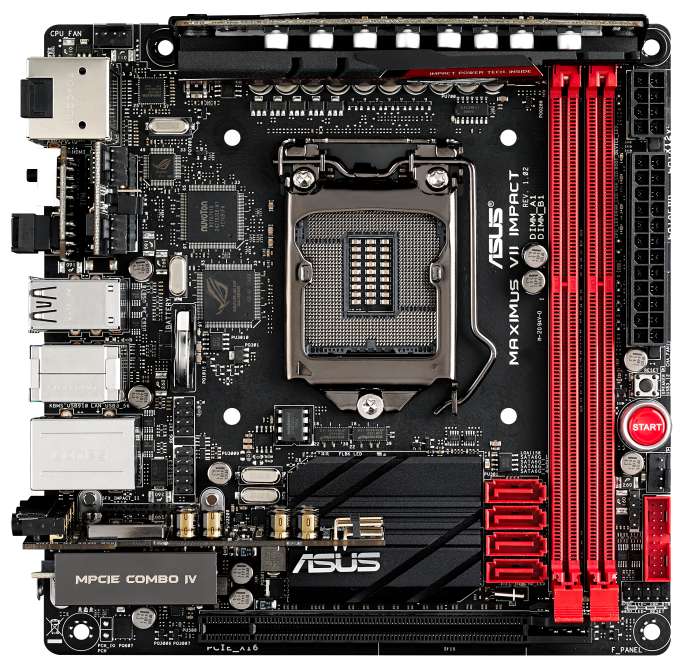 One of the downsides of a motherboard like the Impact is CPU cooler placements, as the socket is up against the Intel designated limits in at least two directions. In this instance it would seem that a closed loop liquid cooler might be best or custom water cooling for overclocking, although a stock cooler for base CPU speeds works as well. The motherboard has four fan headers – a 4-pin CPU at the top left, a 4-pin CHA on the right hand side and the final two on the CoolHub add-in card just to the left of the socket next to the rear IO. 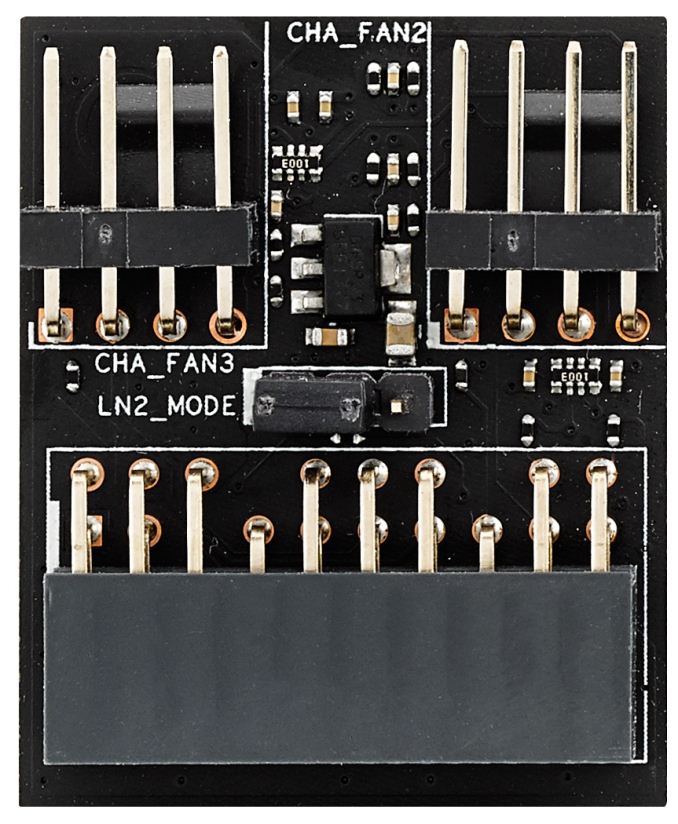 This extra PCB gives two fully controllable headers as well as access to an LN2 mode switch for extreme overclockers. 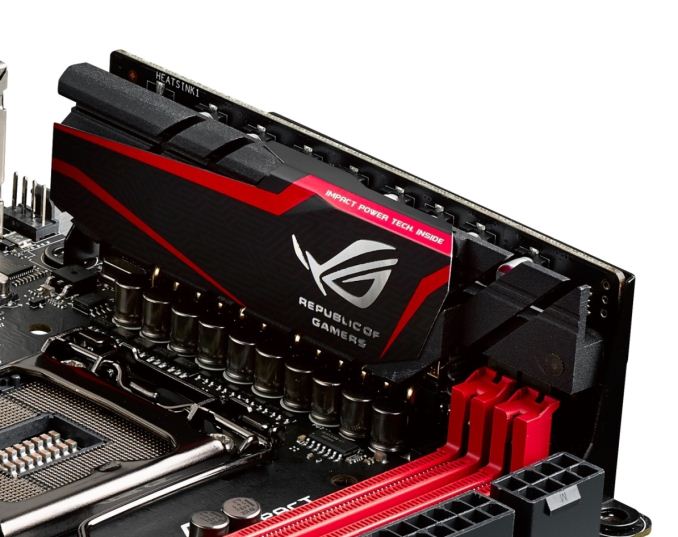 One of the extra PCBs is the power delivery, now in its third iteration. For Z97 this one gets the new ROG look with ‘Impact Power Tech Inside’ written in the red accents. As shown in the picture above, the DRAM slots near this PCB do not have latches in order to fit everything on. This means users should be wary that their DRAM is firmly in place when installing.

On the right hand side of the motherboard beneath the power connectors are the power/reset buttons followed by a fan header and a USB 3.0 header in red to match the livery. The front panel header comes next, with enough space for ASUS to write on the board where each of the chassis connectors should go. At the bottom right of the motherboard just inside the DRAM slots are four SATA 6 Gbps ports, which unfortunately are all pointing in the same direction. This means that if a user has locking cables, the bottom cable can be an issue to remove. 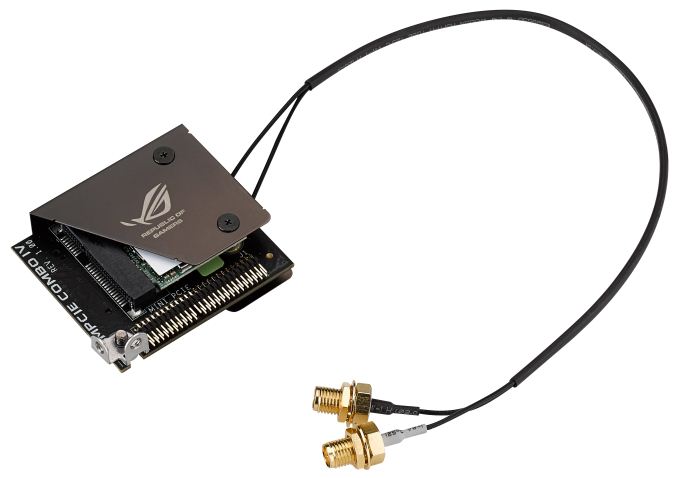 There is a single PCIe 3.0 x16 slot at the bottom of the board, and as we come round to the left hand side we approach the mPCIe Combo IV card. This is upgraded for Z97, featuring an 802.11ac 2T2R WiFi solution as well as an M.2 x4 slot for storage. The previous model relied on x1 connectivity , whereas this is a fully fledged M.2 enabled device. 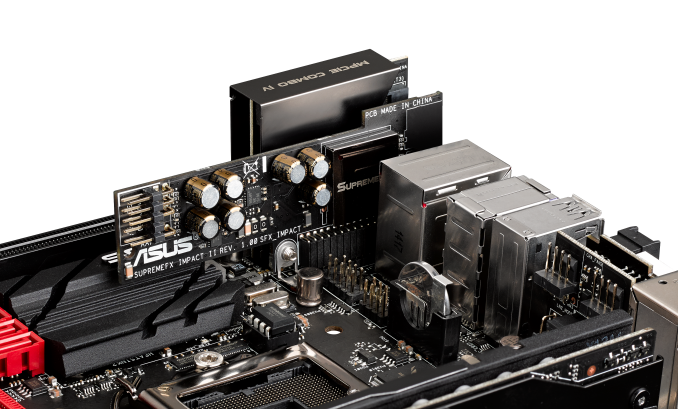 Next to the combo card is the audio PCB, featuring the next iteration of SupremeFX. This means an enhanced Realtek ALC1150 solution with an EMI shield, filter caps, PCB separation (it would be hard to get more separated than this) with the front panel audio connector provided on the card. Due to the design the card only has three audio connectors despite being rated as a 7.1 solution – at some point ASUS might release an Impact with a full set of audio connectors, although this has to be engineered.

The rear panel of the motherboard integrates the Impact Control II PCB, giving users a two-digit debug LED as well as BIOS Flashback, ROG Connect, SoundStage and KeyBot buttons. Added into the mix are two digital video outputs (HDMI and DisplayPort), four USB 3.0 ports, four USB 2.0 ports, a PS/2 combination port and the Intel network port. Further along to the right are the audio and mPCIe combo card outputs.

The SoundStage button switches between four op-amp profiles in the audio in order to adjust various elements of the audio via the hardware rather than software in real-time. This works in conjunction with Sonic Studio to help enhance audio clarity in voice or boost in the low frequency spectrum, depending on the use. ASUS call this latter implementation a ‘smart EQ’.