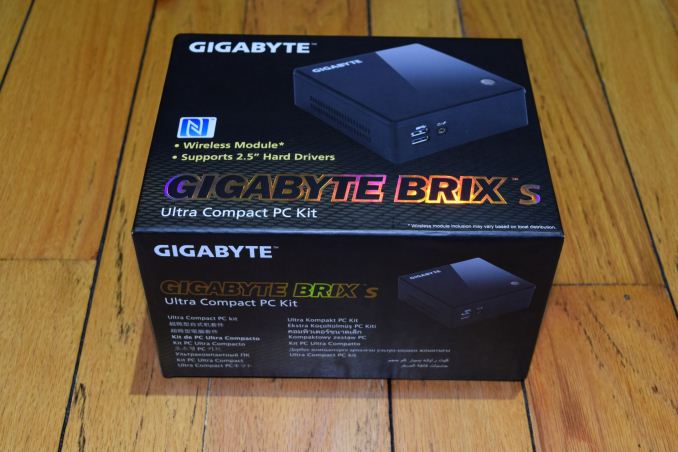 Over the last couple of years, the ultra-compact form factor (UCFF) has emerged as one of the bright spots in the troubled PC market. Intel's NUC and GIGABYTE's BRIX are the most popular lineups in this category. Intel's 14nm Broadwell family was introduced into the market with the fanless Core M-based systems. The excellent performance of units based on Core-M has evoked interest in the performance of the upcoming NUC and BRIX units based on Broadwell-U. Intel is taking its time bringing the NUCs to market after officially announcing them at CES 2015. However, GIGABYTE sent over their premium Broadwell BRIX s SKU, the GB-BXi7H-5500, earlier this week. In this piece, we present results from putting the unit through our mini-PC evaluation routine.

We covered the launch of the Broadwell BRIX units at CES. Similar to the Haswell-based lineup at the time of introduction, we have two chassis designs - one with support for a 2.5" drive slot as well as a mSATA port, and the other with a smaller height supporting only a mSATA port. The GB-BXi7H-5500 belongs to the former category and is part of the BRIX s family. The unit comes with a Core i7-5500U Broadwell-U processor and is the flagship SKU in the introductory lineup. Befitting its premium status, it is the only BRIX s model to come with NFC capabilities.

Similar to the BRIX units of the previous generation, the GB-BXi7H-5500 is also a barebones PC. The storage subsystem, DRAM and OS choices are all left to the end user. We opted for a powerful build, choosing the highest end Corsair Vengeance DDR3L memory SKU and a 120 GB Samsung SSD 840 EVO.

The GB-BXi7H-5500 will have a suggested retail price of $509, a very slight premium over the introductory price of the premium Haswell GB-BXi7-4500 model. Our high-end choices pushed the build cost upwards of $750. However, it is possible to bring down the cost with a judicious choice of DRAM and SSD. The specifications of our review configuration are summarized in the table below.

The GIGABYTE GB-BXi7H-5500 kit doesn't come with any pre-installed OS, but does come with a DVD containing the drivers. The read-only USB keys that came with some of the BRIX models last year seem to be missing this time around. In any case, we ended up installing the latest drivers downloaded off GIGABYTE's product support page. In addition to the main unit, the other components of the package include a 65 W (19V @ 3.42A) adapter, a US power cord, a VESA mount (along with the necessary screws), a driver DVD, screws for the installation of a 2.5" drive and a NFC tag. The gallery below takes us around the packaging and the hardware.

We had installed DDR3L sticks supporting overclocking up to 2133 MHz. Naturally curious about what rate the memory was running at actually, and in order to take a look at the various configuration options, we navigated into the BIOS. The gallery below shows some screenshots indicating the available BIOS options.

The system was able to configure itself without any intervention to run the memory at 1866 MHz. Considering that Intel only officially supports up to DDR3L-1600, this is pretty good. We modified a couple of other options - one related to the OS that we planned to install - Windows 8.x instead of the default Windows 7, and another related to the memory allocated to the iGPU. By default, the iGPU gets only 128 MB. Since the unit was built with 16 GB of memory, we decided to allocate the maximum possible memory to the iGPU in the BIOS - 2 GB. Within Windows, though, hardware monitoring tools reported only 1 GB of VRAM.

In the table below, we have an overview of the various systems that we are comparing the GIGABYTE GB-BXi7H-5500 against. Note that they may not belong to the same market segment. The relevant configuration details of the machines are provided so that readers have an understanding of why some benchmark numbers are skewed for or against the GIGABYTE GB-BXi7H-5500 when we come to those sections. The most important of these PCs is the GIGABYTE GB-BXi7-4500 - they are at similar price points, and the comparison will give us an idea of what Broadwell brings to the table when compared to Haswell.