Let's take a look at the notebook solution first. Since the system/display unit of the PaceBook contains all components necessary for the system to operate as a true computer, all that needed to be added to make the PaceBook a notebook was a keyboard. PaceBlade chose to implement a wireless keyboard solution into the PaceBook to make it more functional. The result: a wireless keyboard powered by 4 AAA batteries that communicates via the system/display unit via commercial IR. PaceBlade shied away from RF when designing the keyboard because using RF would prevent use of a PaceBook on an airplane although it would give the keyboard better range..

PaceBlade claims that the IR keyboard will work up to 15 meters away from the system. To prevent the problem of having more than one PaceBook in the same room, each system can be set to look for IR input on a unique channel (1 to 255). This means that, in theory, up to 255 PaceBooks in a room at the same time working away on keyboards wirelessly. The keyboard's buttons are generously large and were a pleasure to type on but apparently the IR communication is not yet up to par: even when the keyboard and system were relatively close to one another the PaceBook occasionally did not recognize keystrokes. The keyboard's touchpad, located below the keys, also seemed to have a problem with the IR communication, as the touchpad occasionally got jumpy. The keyboard includes an on/off switch but goes to sleep automatically when not used for a specified amount of time. Although it did save battery life, this feature did prove to be somewhat annoying when working because using the touchpad does not wake the keyboard up. Instead, a key must be hit first before the touchpad can be used.

To perfect the notebook design of the PaceBook, something had to be done to position the screen and the keyboard at a ninety degree angle from one another like a conventional notebook. This is setup is made possible by the PaceBook's case. The case of the PaceBook opens like a laptop and has space for a keyboard on the bottom and the unit on top. The wireless keyboard is held in place with three Velcro dots on the bottom of the keyboard. The heavier system and display unit is held in place via rubber clips on the top and bottom of the case. The system and display unit can easily be popped in or out depending on what function is desired. On the outside of the case is a flap panel that holds the system/display unit up when in "notebook" configuration. The flap can be adjusted to a variety of heights, allowing the user to position the screen where he or she wishes. When not in use the flap folds down and becomes a part of the case.

The PaceBook notebook solution proved to be a good one while on a hard surface such as a desk. When set up, the system really felt no different from any other notebook. One complaint we did have was that the notebook can not easily be used in locations other than a desk or a table. Because the system is held in place by the flap on the back of the case, the system was almost impossible to use on a lap, especially comfortably. The best solution to this problem would have been to make a "hard" case that had hinge support for the screen/display like typical notebook computers do, but this would likely increase price of the system. Perhaps a hard case accessory is in order.

When on a desk, the PaceBook's display can also be rotated 90 degrees to put the system in portrait mode. In this configuration the system/display unit does not clip into the case.

The final setup option for the PaceBook is the LCD system configuration. This configuration is achieved by removing the keyboard and folding the bottom half of the soft case behind the unit. Now the unit can be propped up using the integrated stand on the back of the case and the keyboard can be placed anywhere. In this configuration the PaceBook reassembles a desktop PC. For increased desktop functionality PaceBlade is working on an office stand that mounts the PaceBook on a tripod of sorts. 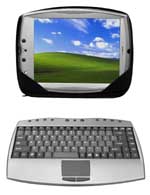 So what they say is true. The PaceBook is, in fact, a 3-in-1 system able to act as a tablet PC, a notebook PC, and a desktop PC. But what hardware lies behind the PaceBook's unique exterior?