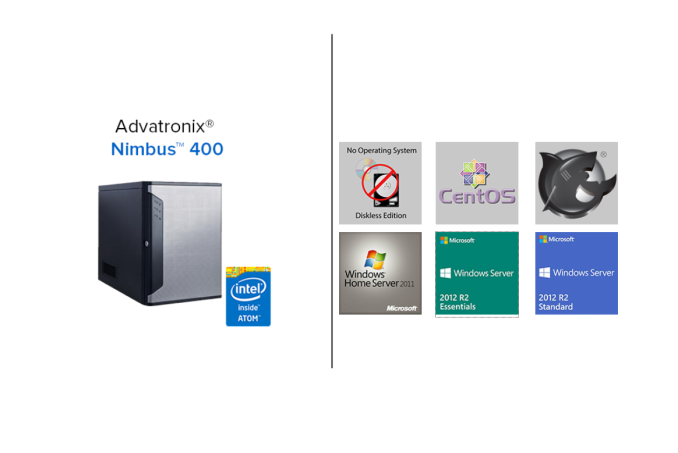 The increasing role of computers and electronic communication has resulted in the need to manage large amounts of data. This need has been felt across a wide spectrum of consumers ranging from home users to big enterprises. In the home / small business space, one option is to use network attached storage units that are ready to use out of the box. Sometimes, it is also necessary to have a server with added flexibility to store the data. This is where storage servers based on Windows or Linux distros come into play. These servers can either be bought as an appliance or assembled in a DIY fashion. Today, we will be looking at a system based on the former approach - the Advatronix Nimbus 400.

Advatronix is a US-based vendor of computing server solutions. We reviewed their Intel Xeon-based Cirrus 1200 solution last year. The Nimbus 400 is a server solution targeting a completely different market segment. Based on the Intel Avoton (Atom) platform, the lineup's members targets scenarios where the primary need is to act as a file server and the general computing workload is not expected to be taxing. That said, the Nimbus 400 ticks the feature checkboxes that consumers usually expect from enterprise-level file server platforms:

The table below compares our review configuration against other systems that have been evaluated by us using the same methodology (and hence, serve as comparison points).

A file server can be used for multiple purposes, unlike a dedicated NAS. Evaluating a file server with our standard NAS testing methodology wouldn't do justice to the eventual use-cases and would tell only a part of the story to the reader. Hence, we adopt a hybrid approach in which the evaluation is divided into two parts - one, as a standalone computing system and another as a storage device on a network.

In order to get an idea of the performance of the file server as a standalone computing system, we boot up the unit with a USB key containing a Ubuntu-on-the-go installation. The drives in the bays are configured in a mdadm RAID-5 array. Selected benchmarks from the Phoronix Test Suite (i.e, those benchmarks relevant to the usage of a system as a file server) are processed after ensuring that any test utilizing local storage (disk benchmarks, in particular) point to the mdadm RAID-5 array. Usage of the Phoronix Test Suite allows readers to have comparison points for the file server against multiple systems (even those that haven't been benchmarked by us).

As a storage device on a network, there are multiple ways to determine the performance. One option would be to repeat all our NAS benchmarks on the system, but that would be take too much time to process for a given system that we are already testing as a standalone computer. On the other hand, it is also important to look beyond numbers from artificial benchmarks and see how a system performs in terms of business metrics. <a href="https://www.spec.org/sfs2014/>SPEC SFS 2014 comes to our help here. The benchmark tool is best used for evaluation of SANs. However, it also helps us here to see the effectiveness of the file server as a storage node in a network. The SPEC SFS 2014 has been developed by the IOZone folks, and covers evaluation of the filer in specific application scenarios like the number of virtual machines that can be run off the filer, number of simultaneous databases, number of video streams that can be simultaneously recorded and the number of simultaneous software builds that can be processed.

Our SPEC SFS 2014 setup consists of a SMB share on the file server under test connected over an Ethernet network to our NAS evaluation testbed outlined below. Further details about the SPEC SFS 2014 workloads will be provided in the appropriate section.

The above testbed runs 10 Windows 7 VMs simultaneously, each with a dedicated 1 Gbps network interface. This simulates a real-life workload of up to 10 clients for the NAS being evaluated. All the VMs connect to the network switch to which the NAS is also connected (with link aggregation, as applicable). The VMs generate the NAS traffic for performance evaluation.