You may notice a striking resemblance between the ECS i-Buddie systems we have taken a look at in the past and the WinBook J4. Your eyes are not playing tricks on you. The reason that the two notebooks look so similar is because they both are built around the same case. In fact, nearly everything on the outside of the WinBook J4 can be found on an ECS i-Buddie system with a few exceptions. 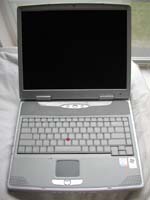 The colors of the J4 are gray and silver; fairly conservative but also pleasing. When shut, the top fourth of the system is silver while the remainder is light gray. This made the color of the J4 different than the i-Buddie systems we have seen, but all that took was a little bit of paint.

Like the i-Buddies, the screen of the J4 is held in place by small magnetic hooks which disappear inside the system case when not in use. We have noted before and will note again that the system seems to work fairly well and prevents unsightly hooks from being present on the screen top or system bottom. This system does involve more moving parts than conventional screen locks which could be a problem down the road. In our short time with the J4, however, the locking mechanism worked as advertised.

We did notice a flaw in the J4's design. It seems that the rubber plunger that sits to the left of the right screen hinge does not work properly. The plunger is supposed to turn off the J4's backlight when the screen is closed, saving battery life. In our J4 depressing this plunger did nothing to the screen brightness: the screen remained on regardless of its state. As we took the system apart we noted that the plunger was making contact with the small switch mounted on the motherboard that is supposed to detect if the screen is closed so the problem is likely not isolated to our system. This has the potential to drastically decrease battery life of the J4 as there is really no way to turn off the screen's backlight without turning the system off or putting it into standby. This problem also plagued the ECS i-Buddie systems but was not a big deal since the I-Buddies never ran on battery anyway.

One thing that has changed in the J4's exterior when compared to the ECS i-Buddie is the keyboard used. Both keyboards are very similar but the keyboard in the J4 includes an integrated pointing stick as a second input method. The pointing stick is located right between the bottom of the G and H keys and right above the B key. This was a nice option to have especially for those that dislike the touchpad found on the vast majority of notebook computers (we know there are a lot of you out there).

The keyboard is a full sized 85-key keyboard that features spacious 19.6 mm keys. Again, the only qualm we have about this keyboard is the location of the function key. The function key is placed on the far left of the keyboard, making it the last key at the keyboard's bottom left side. Since this is where we typically find the control key on desktop keyboards, the shifted location of the control key took a bit of getting used to.

The touchpad on the J4 is the same one found on the ECS i-Buddie 4. We initially noted that the touchpad on the i-Buddie 4 was a bit small when compared to some of the others we have seen (an issue resolved with the newer i-Buddie XP) but when push came to shove the J4's touchpad got the job done without any problems. The left and right buttons fall below the touchpad are are centered around a small circular button that serves as the scroll up and scroll down buttons. Unfortunately the system's internal microphone remains located slightly above and to the left of the J4's touch pad. This meant that the microphone hole was easily covered and subjected to quite a bit of noise when our hands were on the keyboard.

To the left and right of the touchpad, in the area reserved for a wrist rest area, lie a set of holes through which sound from the speaker passes out. We were a bit unhappy with the location of the holes since they were easily covered during normal system operation. Taking the system apart revealed that only the outer fourth of the holes actually have a speaker mounted behind them since both speakers are mounted vertically rather than horizontally. This left a good two thirds of the speaker blasting audio output directly onto the top of the case sans holes. The mounting of the speakers is described in more detail in the Under the Hood section of this review. For now all you need to know is that although our hands covered up a good portion of the speaker ports it did not adversely effect audio playback quality.

Above the keyboard lies a large grill area that aids in system ventilation. Underneath the left size of the grill is a fan that sucks cool air from the top of the system and blows it down across the heatsink used to cool the Pentium 4 CPU. Mounted in the center of the grilled area are a set of function buttons. The button layout and style remain the same as the type found on the ECS i-Buddie 4. This places the internet button on the far left, the power button in the middle, and the mail button on the right.

To the left of the keyboard lie two status LEDs. One of the LEDs indicates power state while the other shows battery status.