G.Skill supplies the Ripjaws KM780 keyboard inside a well-designed cardboard box. The artwork theme of the box is focused on a picture of the keyboard itself and promotes its most important features. Inside the box we found a basic quick start guide, a large wrist rest with a soft top layer and a container with a keycap removal tool and ten red "gaming" keycaps with ridged top surfaces. Three of the keycaps, the W, A and D, have their top greatly beveled and facing towards the central S key. 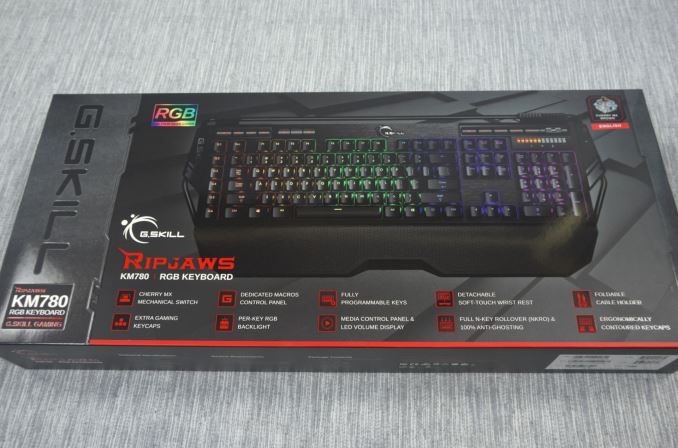 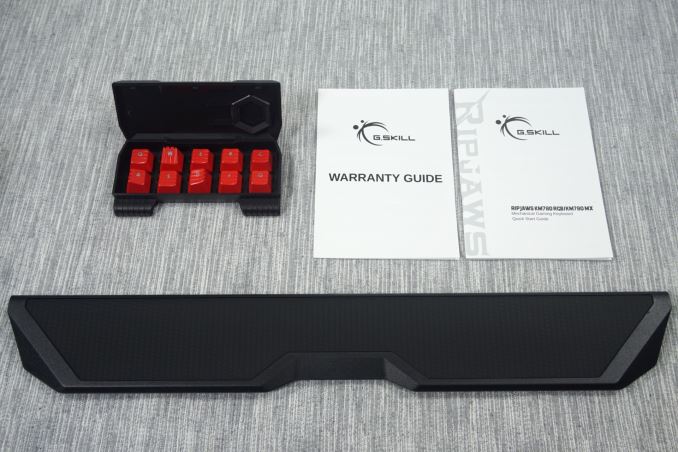 Some companies keep their designs plain and serious while others make them complex and aggressive. The Ripjaws KM780 is something in-between. Everything on the keyboard is black, with the metallic company logo at the top of the keyboard being the only exception. The keycaps are mounted directly onto the aluminum top frame of the keyboard, which aluminum surface is somewhat overly prone to fingerprints. Plastic decorative flaps with the company logo imprinted on them extend from the sides and a metallic tube surrounds the keyboard.

Aside from the standard 104 keys, there are several extra keys on the KM780. Six programmable "G" keys can be seen to the left of the keyboard. These keys are also mechanical and illuminated, like the main keys. Right above the "G" keys and the ESC key, G.Skill placed the macro recording and mode selection buttons. The three smaller buttons to their right are the Windows key lock, the brightness selection and the timer buttons. It is worthwhile to mention that is the first time we saw a dedicated timer button on a gaming keyboard.

Five more flat buttons can be found to the right side of the keyboard, followed by a metallic volume control wheel. Four of them are used for the basic media functions and the last one is the volume mute button. Right below the volume control wheel, G.Skill installed a LED bar indicator that displays the master volume level of the system. It is a cool feature but we found a minor bug: if the main audio device changes, e.g. USB headphones are connected, the bar does not reset itself and one has to turn the volume all the way down in order for it to display the proper volume level again.

As the mechanical keys are rather tall, G.Skill placed most of the flat buttons into plastic frames that elevate them a few mm, providing easier access and limiting the chance of accidentally pressing a mechanical key while trying to push one of the buttons. Only the three smaller Windows key lock, brightness and timer buttons are not elevated, probably because the designer thought that their use is infrequent/secondary. 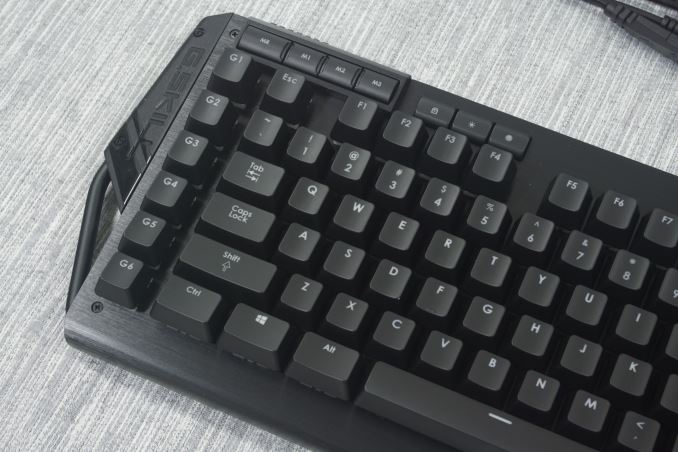 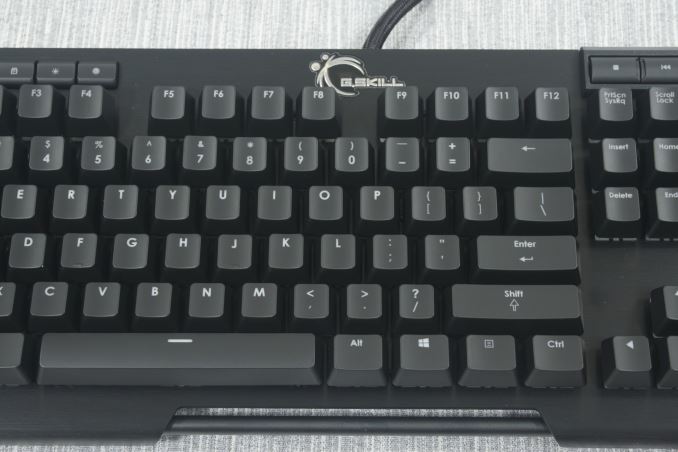 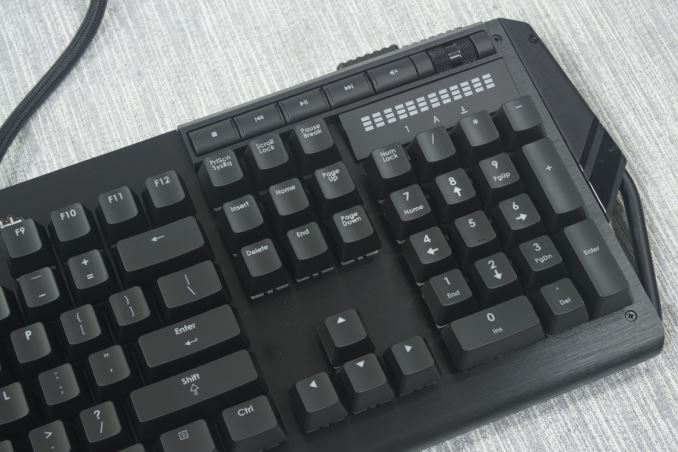 One USB port and headphone jacks can be found at the rear right side of the keyboard. There is also a switch that can be used to turn the KM780 into a standard keyboard, disabling programmability and n-key rollover to maximize compatibility. This sometimes is necessary with very old motherboards or even while accessing the BIOS of more recent systems. 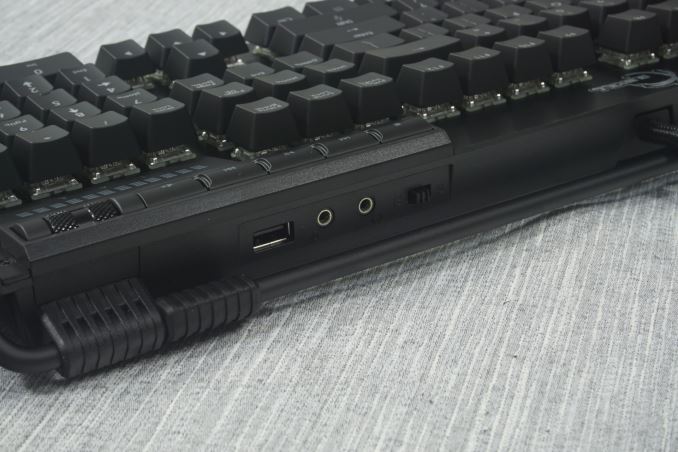 G.Skill also installed a plastic "cable mouse holder" on the metallic tube at the rear of the keyboard. This can be moved at any point across the tube or, if it is not going to be of any use, folded beneath the keyboard. Do note that unless the keyboard's feet have been extended, the cable holder does not fit beneath the keyboard unless it is at the rightmost edge of the tube, where a slot for it exists. The extra container with the additional keycaps can also be attached to this metallic tube. 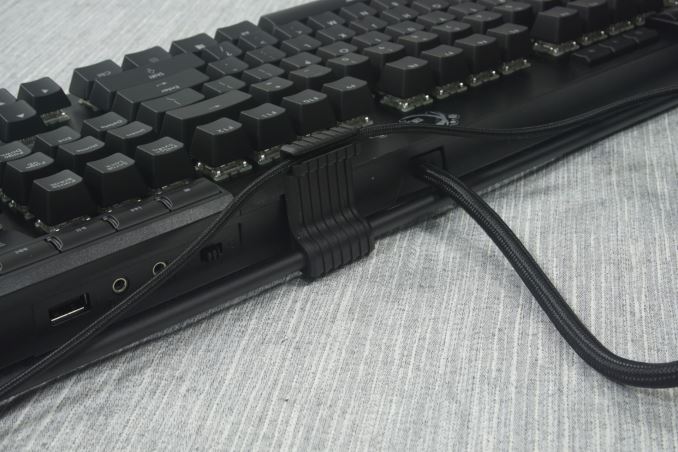 Beneath the keycaps we found original Cherry MX RGB switches. These were exclusive to Corsair for a year since their launch in 2014 and apparently G.Skill jumped on the opportunity the moment that exclusivity period was over. The Ripjaws KM780 comes with either Red or Brown switches at this point of time and this pictured is the Brown version. Cross-type supports can be found beneath the larger keys. 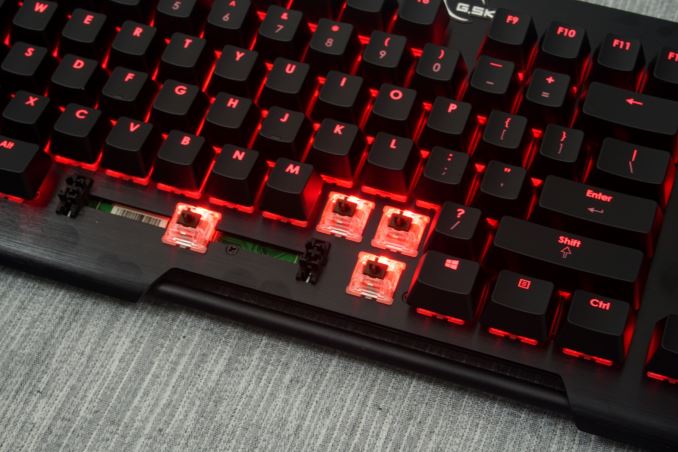 As for the backlighting, the Cherry MX RGB switches currently provide the best visual experience possible. Their clear bodies allow the most uniform distribution of lighting around the key and that is especially apparent with mixed/complex color settings. In theory, the Cherry MX RGB switch can have any color of the RGB scale (that's about 16.8 million colors) but, as we have mentioned in all of our RGB keyboard reviews to this date, the human eye cannot possibly differentiate more than a couple dozen colors. It is highly unlikely that the vast majority of people will care to choose any other color than the few core colors provided by the software. 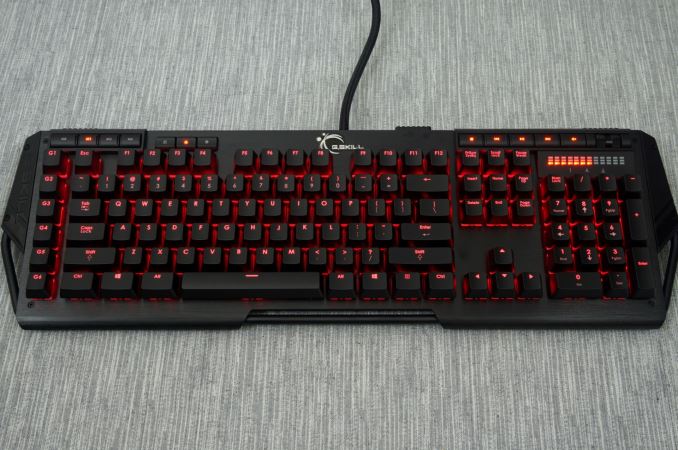 There is just one major issue with the backlighting of the G.Skill Ripjaws KM780 and that is the lighting of the flat buttons at the top of the keyboard. The lighting color of these buttons, including the volume level LED bar indicator, cannot be changed and is always red. So, if the main backlighting color of the keyboard is changed to any other color than red, these buttons are a major visual dissonance. 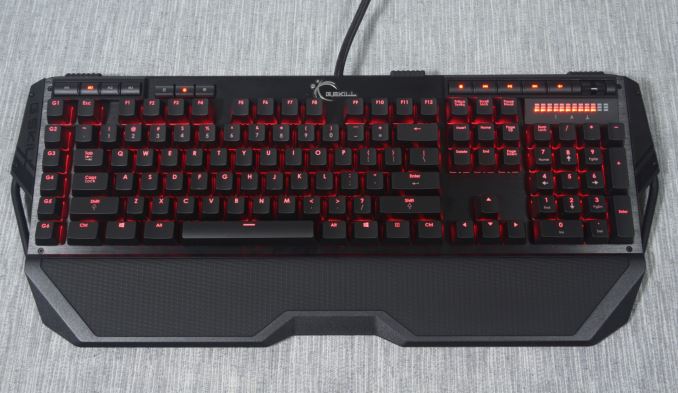 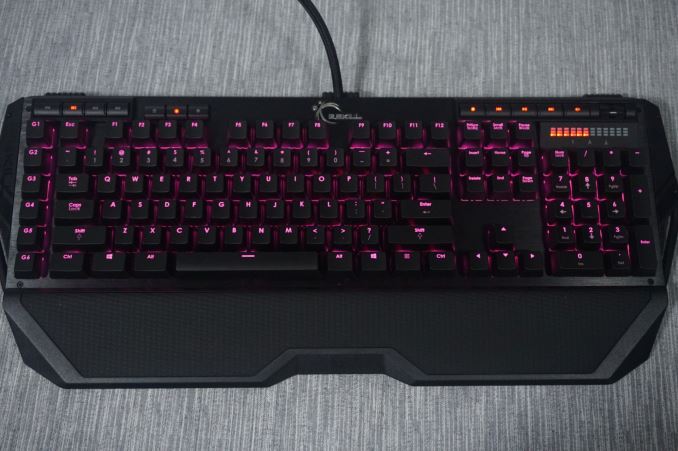 In order to test the quality and consistency of a keyboard, we are using a texture analyser that is programmed to measure and display the actuation force of the standard keyboard keys. By measuring the actuation force of every key, the quality and consistency of the keyboard can be realized. It can also reveal design issues, such as the larger keys being far softer to press than the main keys of the keyboard. The actuation force is measured in Centinewton (Cn). Some companies use another figure, gram-force (gf). The conversion formula is 1 Cn = 1.02 gf (i.e. they are about the same). A high quality keyboard should be as consistent as possible, with an average actuation force as near to the manufacturer's specs as possible and a disparity of less than ±10%. Greater differences are likely to be perceptible by users.

The machine we use for our testing is accurate enough to provide readings with a resolution of 0.1 Cn. For wider keys (e.g. Enter, Space Bar, etc.), the measurement is taking place at the center of the key, right above the switch. Note that large keys generally have a lower actuation force even if the actuation point is at the dead center of the key. This is natural, as the size and weight of the keycap reduces the required actuation force. For this reason, we do display the force required to actuate every key but use only the results of the typical sized keys for our consistency calculations. Still, very low figures on medium sized keys, such as the Shift and Enter keys reveal design issues and can easily be perceptible by the user. 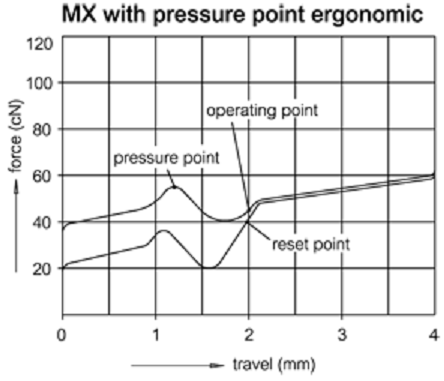