China Calling: Huawei’s Media Tour, Kirin 950 and Why We Went

Huawei's Media Tour, and Why We Went

When it comes to companies based in China, the obvious tropes of secrecy come into play. Most companies want some level of secrecy, but some have abstracted themselves through PR firms to avoid direct media contact. Despite these companies being big behemoths in their own market, with a back-thought to large towns of 10,000+ people devoted to one factory, access from our side of the fence can be limited. In order to get that access, and to meet face to face, typically requires an invite to their facilities purely on their terms: they fly you out and they dictate what you see during that trip.

For those journalists in the industry reading this, some of you may have come across recent critiques from both inside the tech press and from readers about these trips, as a form of payola to generate content that flatters the company and whether this is an ethical process at all, as the journalist or editor is accepting a ‘free trip’ which could cloud their future judgement. There have been many situations when a ‘free trip’ becomes a series of posts or ‘look at what we did’ videos, without any critical analysis or development to the industry (or any clarification of who paid for which product placement, which can be deceptive at best).

But with the right attitude, depending on the journalists or editors you follow and trust, one can retain the element of editorial independence when getting involved in this. As mentioned already, the crucial part of accepting these trip offers is to talk to and understand the people that matter most, in a process to open doors for the future, and for some of these companies, taking that media tour when offered is that process. If you don’t take that step, then the relationship stagnates, and as a journalist you end up pumping out more of the same, rather than trying to be the best you can be and generate the sort of traffic that makes who you write for unique.

This sounds like a boring setup to an opinion piece on ethics in technology journalism, but I promise it is not. But these are the foundations on which AnandTech accepts any ‘paid for’ trip, along with maintaining editorial independence but focusing on the relationship, and circumstances evolved recently such that one of the companies we’ve wanted to probe in more detail for a while gave us that opportunity this November. In 2015, Huawei, through their PR companies and contractors, has been giving short media tours of its technology facilities to small groups of journalists this year, as well as group interviews with important VPs up and down the chain. Note that at the top of the piece I mentioned that these trips are dictated by the company involved, so we were under no disillusion of the circumstances which would be presented (I can’t fault someone from doing their job in all honesty), but Andrei and I made our way to both Shenzhen and Beijing as part of the media tour. Needless to say, we requested meetings with the technical teams right away. 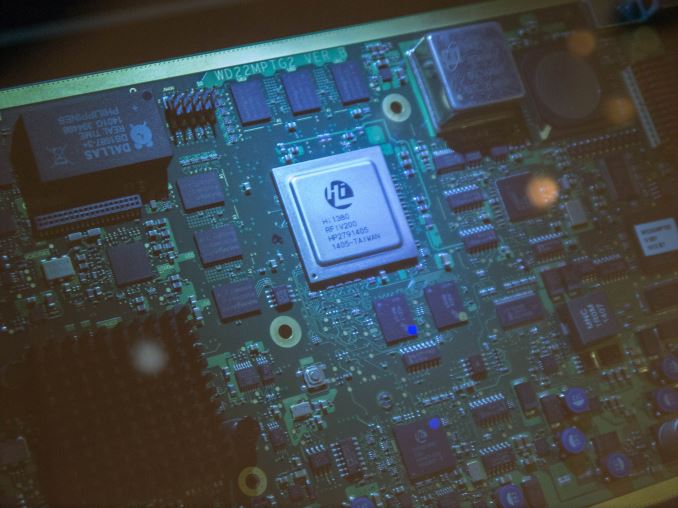 From first contact, the travel arrangements for the tour changed multiple times, from visiting factories and research facilities in Shenzhen/Dongguan followed by R&D tours in Shanghai, to a day with six or seven VPs for 1-on-1 discussions, to a new Kirin family release in Beijing. In the end, the tour started in Shenzhen at a very typical set of smartphone testing labs in nearby Dongguan, followed by a flight to Beijing for the Kirin release and further interviews and discussions. During this time, we spoke in depth with Mengran Duan, the president of Huawei’s watch products, a tour of Huawei’s device testing labs, discussions with Bruce Lee, VP of the Handset Product Line, and the announcement of the Kirin 950. Beyond this there were discussions that we cannot talk about at this time, but for the benefit of our readers they were certainly fruitful and should offer us more perspective (and routes for information) in future Huawei-related discussions. 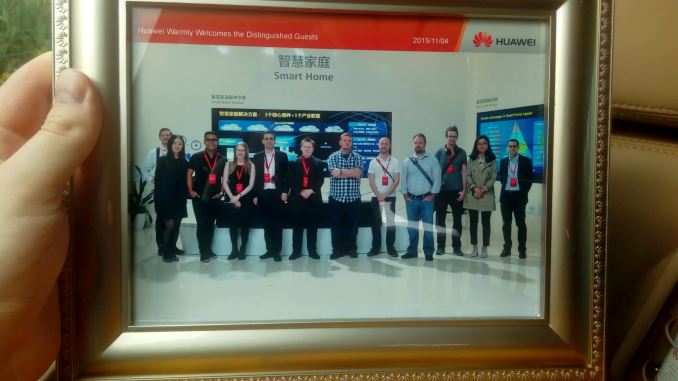 The US Media Tour group – spot your favorite editors

To add an element of amusement in the mix, as with any Trade Show such as CES and Computex, a lot of companies are free-flowing with goodie bags. Most of it is normally junk that’s thrown away almost immediately (I have a dozen mousepads I don’t need, and even more USB sticks of ex-product kits). All of it is designed to curry the favor of the journalist and to butter them up with freebies (so keep an eye on the journalists you trust), but sometimes there’s a high quality notepad or something worth keeping or passing on. Similar to Huawei’s previous media trips earlier this year, they sampled the tour participants with their latest US-based handset (which we’ll review) as well as a small wearable extra - the handset was augmented with the Talkband B2 wearable and the above framed memento of the group of media during the trip. We also asked about how Huawei will be sourcing the first Kirin 950 devices on the market, namely the Mate 8, and were told to keep our email clients open for details when the time comes around.