Since pretty much all of Qualcomm's mid range and low end SoCs act as a quad core A53 CPU in practice, the differences in performance tend to come from the small frequency differences between them, as well as software differences from device to device. With the Honor 5X one would hope that it's able to match the Huawei P8 Lite for performance, and pull ahead of the 2015 Moto E and Moto G models by a small margin. 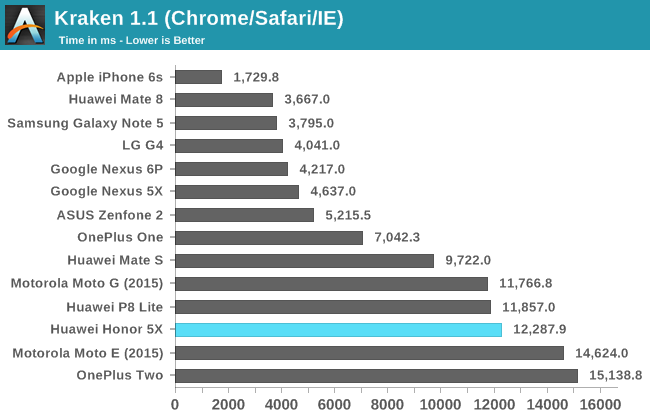 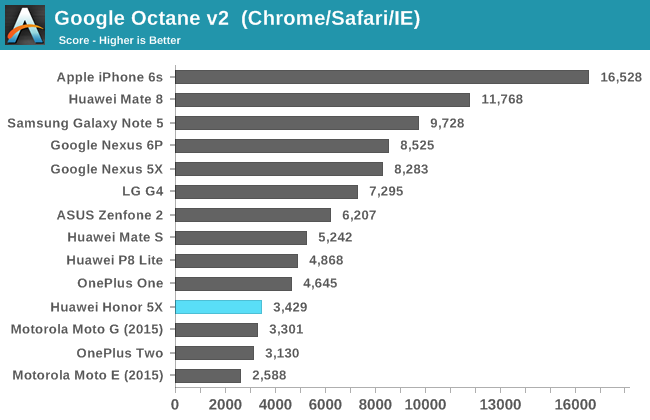 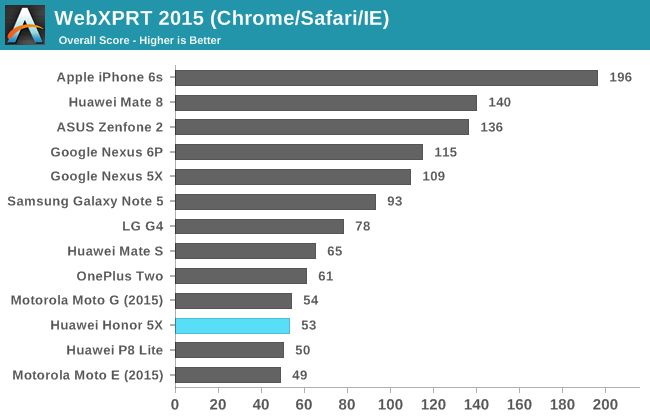 In our web browser benchmarks I would say that the Honor 5X performs right around where you'd expect. Scores are very close to the Moto G (2015) and the P8 Lite, which is where they should be when one considers that all the devices are basically bound by the performance of a single Cortex A53 core running at 1.4 to 1.5GHz. The gap in Octane does strike me as interesting though, as that Snapdragon 615 ran at the same 1.5GHz frequency as the Honor 5X's Snapdragon 616. Unfortunately, I no longer have the P8 Lite to take a look at this. 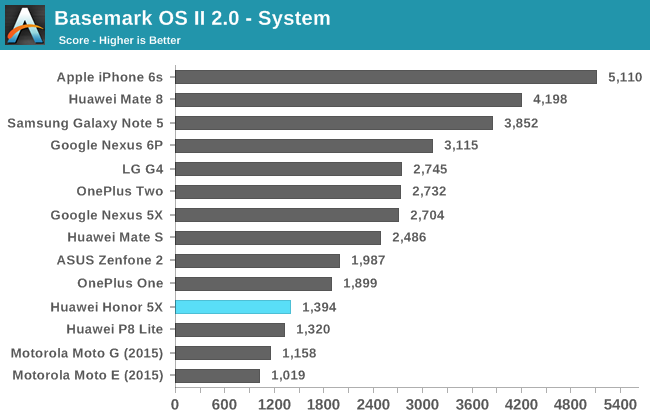 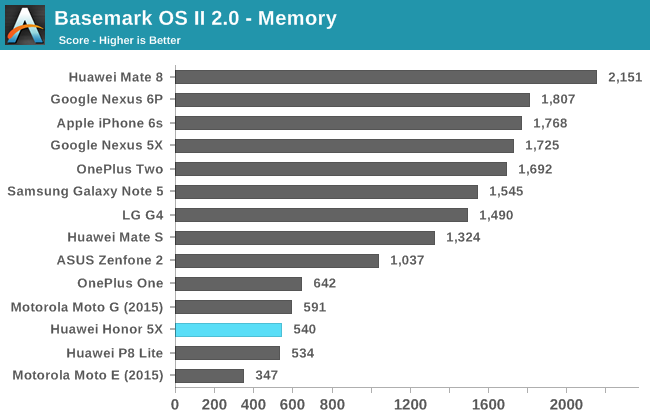 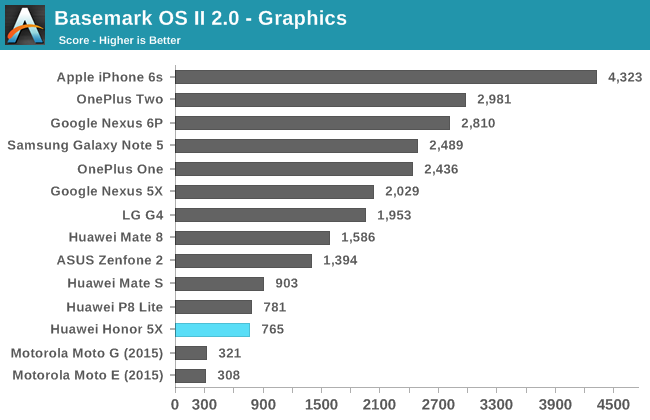 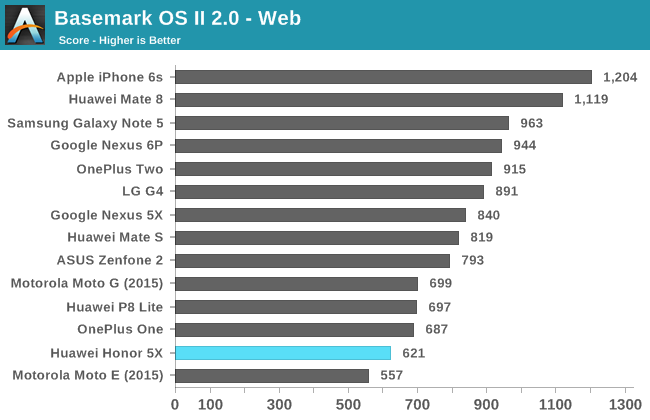 In pretty much all of BaseMark OS II's tests the Honor 5X is very close to the P8 Lite. The web test shows a larger gap between the two, with the Moto G actually performing closer to the P8 Lite than the Honor 5X does. Where the Honor 5X really pulls away from Snapdragon 400 series devices is the graphics performance sub test. Adreno 405 is simply much faster than Adreno 305/306 which we see in the Snapdragon 400 series SoCs, and that's just one of the benefits you get when paying the premium to move up from the $100-150 price bracket. 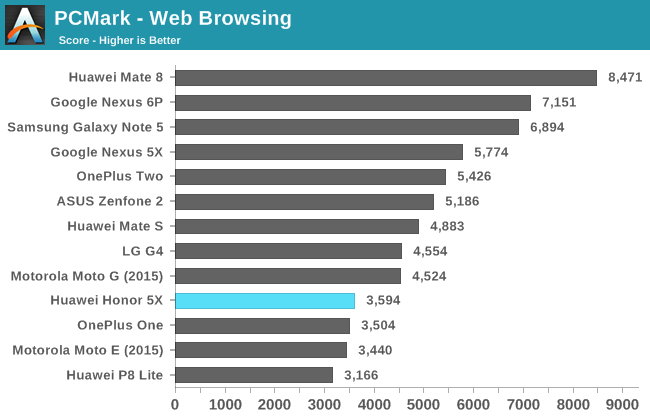 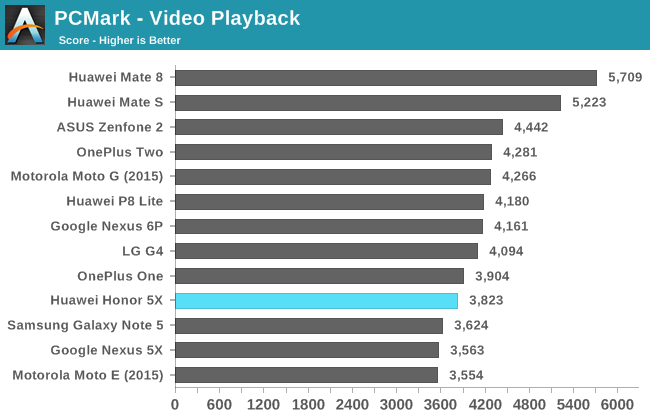 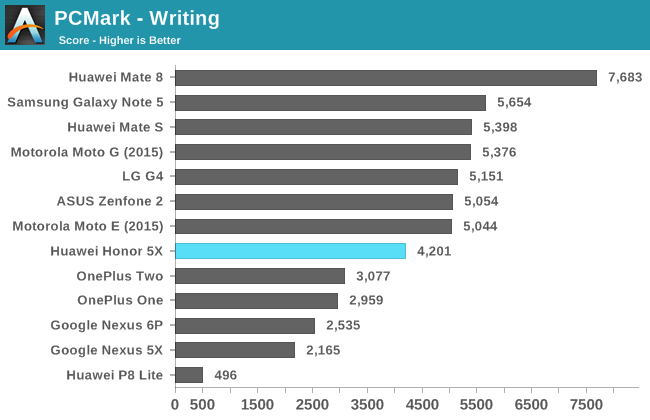 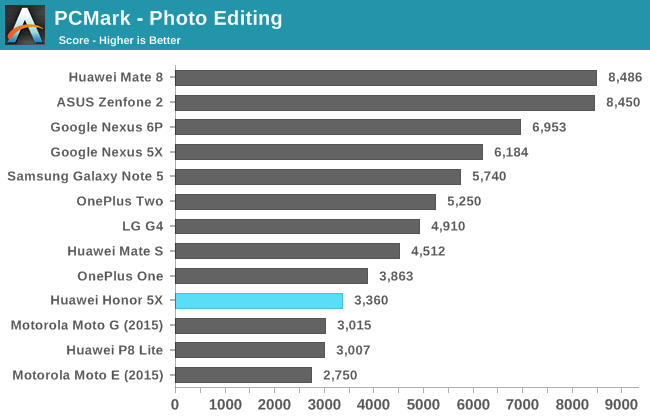 The Honor 5X doesn't make as strong of a showing in PCMark as it does in our web tests and BaseMark OS II. It ends up sitting behind the Moto G in all but one test, and often by a noticeable margin. Once again we see that there's a gap with web browsing performance, which in light of the similar gaps in Octane and BaseMark's web test makes me wonder if there's something on the software side reducing performance compared to Motorola's fairly "stock" firmware. One thing to note is that Huawei has addressed the problems they were having with the writing sub test, and we haven't been seeing the triple digit scores of devices like the P8 Lite for some time now.

Apart from the curious case of the Zenfone 2, Snapdragon 615/616 offers the best performance that you're going to get in a $200 smartphone. The Honor 5X does appear to have some odd reductions in web browsing performance compared to other Snapdragon 410 and 615 smartphones, including Huawei's own P8 Lite, but it's difficult to say exactly what could be causing this beyond it probably being something different in the software between all these devices.